Thursday afternoon was a summer like day maybe a tad on the warm muggy side. Entering into City Hall mid-afternoon, the temperature felt hotter. The day after the raucous City Council meeting from the night prior showed the heat had not dissipated but risen right into the mayor's office.

In a comprehensive interview Thursday with MSV, the mayor addressed numerous issues of the day: the Municipal Garage a centerpiece among them.

Regarding many third ward residents concerns and the recent circus like atmosphere at the City Council on repeated rumors the municipal garage would move to 6th and Jackson Street the mayor said she had watched the entire proceedings that ended near 1:30 am. "I am listening very carefully to the community. I am talking to them directly, responding to them. I hear their comments and am not going to push something that has strong concerns." The mayor also suggested a community meeting was probably in the works.

To a follow up question that residents of the third ward were not "hearing anything" until 6th and Jackson is off the table, "There's a misunderstanding around the process. Anything I do has to go through a public process... They (the public) will be part of that." Selecting a location for any new temporary home for the Municipal Garage goes through the City Council. The mayor emphasized that role stating, "They will make the final decision."

Showing strong concern on misinformation being voiced a decision had already been made, the mayor was blunt. "There's a misunderstanding in some of the public's mind in how any move (of the garage) would be managed. We've been working to develop many different options, but I'd rather not say how many as we're in the RFP process. It's legally required."

The mayor's office added via email after the interview the mayor has also conducted multiple meetings with officials in Union City, Weehawken and Hudson Country about sharing services.

Looking ahead to the central role the City Council will be playing in the important period ahead with the developer, S. Hekemian Group and numerous possibilities the mayor said, "The City Council is the redevelopment agency. I've always been very careful and very respectful of their role as the redevelopment agency." She later described her position with both the developer and the City Council. "My strong recommendation is we move forward with the agreement, as is. That's in the best interest of Hoboken."

This leads to the current review brought up in the last City Council to obtain county finance approval for bonding $16 million to prepare for all contingencies, including the possibility the developer may not be prepared to finalize the $25.5 million dollar sale on August 13th. The mayor indicated the two proposals from the developer S. Hekemian Group awaited final comment from the City Council but she viewed their requests a non-starter.

Describing financing availability as "critical" the mayor asked for the support of the City Council, saying it's essential for the city to be prepared for all outcomes. "I am doing all contingency planning. We are going to be prepared for August 13th," - the closing date with the developer, S. Hakamian.

"I'm concerned they won't close (August 13th) but the city will be ready. We've worked with (the state) Department of Environmental Protection. Gov. Christie has made changes within the DEP... so it's (more) receptive to the business community. ... A project like ours is economically sensitive, and they created a new office moving the review process in a very timely manner."

To some critics charges the work on the Municipal Garage had only been worked on now, "My political opponents are always going to say things about me and try to spread rumors and so that's a challenge I face. We've been working on many different fronts to develop as many different opportunities and finalize the site," the mayor concluded. 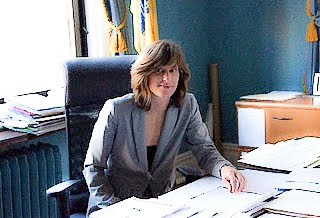 Photo: Mayor Dawn Zimmer at City Hall earlier this year. All rights reserved.
Next: Taxes and the construction of the new downtown sewage pump.

Another step in the Municipal Garage process will be an option to secure the ability to obtain $16 million should S. Hakamian not close the sale of the Municipal Garage August 13th. The City Council will have a special meeting on Sunday, June 13th to discuss securing financing and meet a required 60 day window to obtain the best terms.

Councilman Mike Russo opposed the bonding request to the county finance board at Wednesday's meeting saying it could be used for anything other than the Municipal Garage and he wouldn't "put it past" the mayor to do so. He later described any effort to buy back the garage as "baffling, ridiculous and asinine."

Councilman Mike Lenz replied, "You can't have it both ways Michael" to the charge the City Council is choosing the Pino's location on 6th and Jackson while simultaneously working to buy back the garage and have it remain in its existing location.

Councilwoman Carol Marsh then read the portion pertaining to usage of any monies bonded naming the current location of the Municipal Garage.

Councilman Russo also voiced his opposition to the next council reading of the bond request saying he was unable to attend on June 13th.

Talking Ed Note: MSV had been scheduled some weeks back on a request to do an interview with the mayor. The last interview was in February. As luck would have it, the date turned out to be the very day after the last City Council meeting.