City Council on FiOS - We got that

City of Hoboken announces:
COUNCIL MEETINGS NOW BROADCAST ON FIOS
Citizens of  can now stay current on the happenings in City Hall by viewing City Council meetings on FiOS, Cablevision, and via live streaming online video.
The City’s IT Department also recently implemented a set of wireless headsets which are available for members of the public who are hearing impaired.
Subscribers of Verizon FiOS will now be able to watch pre-recorded video of the Hoboken City Council meetings on television. The meetings will be broadcast on Channel 47 on the FiOS network, and Board of Education meetings will be broadcast on Channel 46.
Cablevision subscribers can continue to watch Council meetings on Channel 78 and Board of Education meetings on Channel 77.
The City of  also provides a live online video stream of all Council Meetings at: http://www.hobokennj.org/council/live/. News organizations, blogs, and other websites can easily embed the video stream on their own websites.
Get the latest  news:
Website | Facebook | Twitter | RSS
Posted by SmartyJones at Monday, June 21, 2010
City Council on FiOS - We got that
2010-06-21T13:38:00-04:00
SmartyJones
Hoboken City Council|now on FiOS Ch. 47|
Comments

A vote for a new garage location

Reader Slayer submitted a different choice for the temporary Municipal Garage location.
Not clear how many votes it might generate on the Council, but some of the public might get behind it. 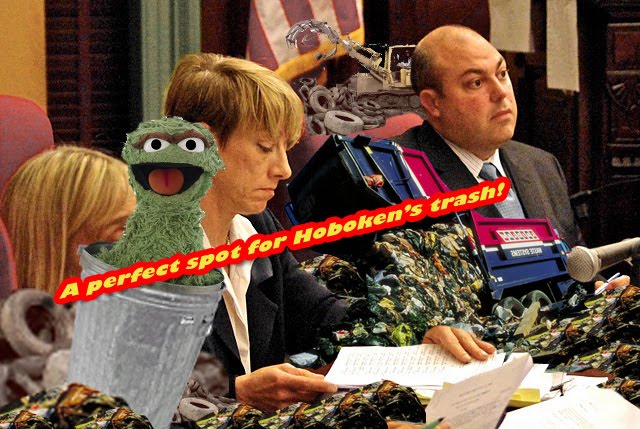 DOUBLES BIKE RACK LOCATIONS ACROSS CITY
Launches bike rack sponsorship program for residents and businesses
The City of  is drastically expanding its bicycle parking capacity by more than doubling the number of locations with bike racks.
"They say that if you build it, they will come, and that's exactly why we're continuing to expand our bicycle infrastructure," said Mayor Dawn Zimmer. "This is an important component of my administration's comprehensive efforts to make  greener and more bike and pedestrian friendly."
New bicycle racks are being installed along the  and  commercial corridors, around the 2nd and  light rail stops, near parks, and in other key areas including the hospital and supermarkets.
"We can't install them fast enough," said Transportation and Parking Director Ian Sacs. "Sometimes within minutes of bolting them down, they fill up with bikes."
The 36 new bike rack locations will increase 's bicycle parking capacity by more than 200 additional spaces. Bike racks were previously available at 29 locations. Click here for a map of existing and new bike rack locations and their capacities.
"We at Hoboken Sweet Streets are pleased to see new bicycle racks popping up all over town," said James Vance, a founding member of the bike and pedestrian advocacy group. "The administration is to be applauded for its effort to promote bicycling as an important part of the transportation mix."
In addition, the City is setting up a program through which residents and businesses can sponsor bike racks to be installed outside their storefronts or other locations with an inscription acknowledging the sponsor. Those interested in the program can emailbikes@hobokennj.org to request a sponsorship form.
Photo Caption: The first new bike rack on  near  is seen full of bikes the day after being installed.
Get the latest  news:
Website | Facebook | Twitter | RSS 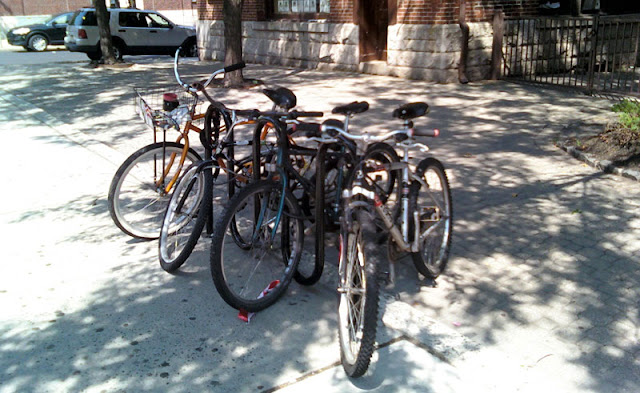 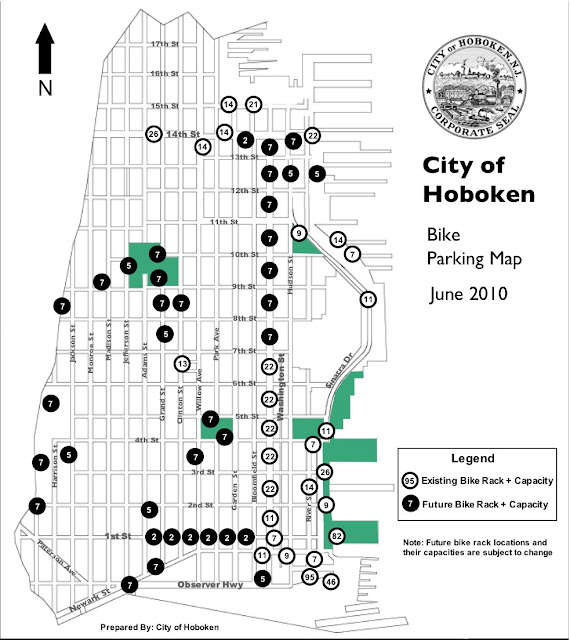 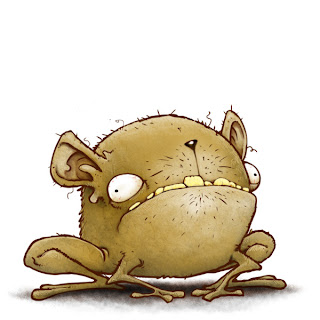 Tuesday the City Council will hold a special meeting and one of the items will be to determine where the Municipal Garage should go.  No this is not a drill.  This is not a rumor, this is really, really the actual process for where a temporary municipal garage should go.

This could change of course too.  If the developer fails to come up with the payment for the garage on August 13th, the city will have the option to keep the Municipal Garage where it is and that is going to upset some folks, especially political operatives yelling the Councilman Mike Russo line it shouldn't go on Jackson St. in the third ward.

The last City Council meetings saw a significant drop off of the third ward residents who are beginning to realize all the hype about the Pino's site may not have been as claimed.  They were baffled to listen to their councilman, Mike Russo argue against approving a no cost contingency bond to keep the Municipal Garage where it is and some were expecting it to happen at the Sunday special meeting.  Half of the third ward residents still attending were clearly in favor of the Municipal Garage bond ordinance and some made a point to speak out on its behalf.

As it turns out, the owner of Pino's gave testimony convicting former Mayor Anthony Russo leading to his prison sentence.  The idea the owner would now profit with a lease from the city can't sit well with the Russo family.  Third ward residents have a chance to voice their preferences as other city residents as part of the true, public process.

Will they show up now in the numbers earlier or do they now see how they were used as political tools in a sideshow to this point?  Tuesday night will tell the story.

Here are the potential selections for the temporary Municipal Garage:


The following bids were received for an exterior parking lot:
The city indicates it will review and evaluate the bids based on multiple factors, including location, cost, and impact on the community.  Some of these locations are clearly small, partial solutions and hardly merit the attention and hyper partisan comment they will surely generate.
The claimed Stevens Institute location Councilwoman Beth Mason charged as being the choice of City Council President Peter Cunningham and an unnamed city spokesman turns out to be a 2,000 square foot location.  That's clearly a limited choice and would hardly be the destructive neighborhood killer she claimed in an email blast to residents. 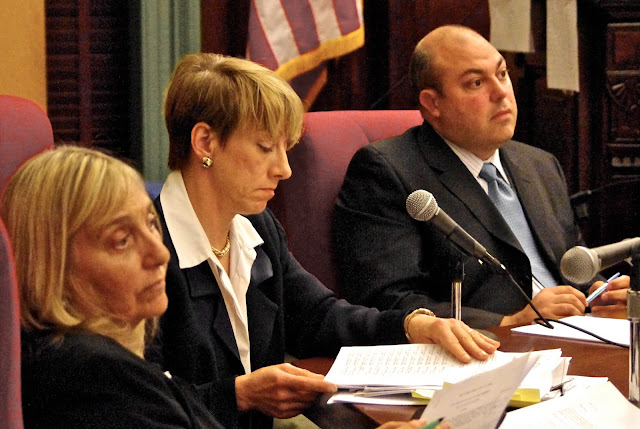 Lots of noise, grandstanding and then a sudden collapse against the bond ordinance
After the council of no folded like negotiations with a $20 hooker oppossing the municipal bond ordinance, will they actually contribute to a sensible dialogue on this issue or will it quickly degenerate into grandstanding for its own sake?
More importantly where do you think the temporary garage should go?