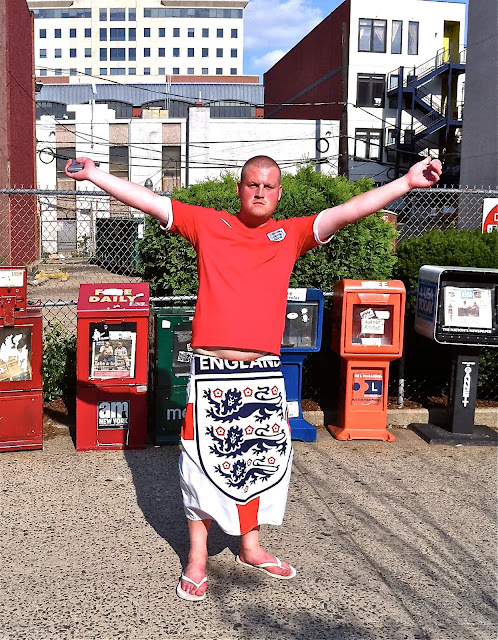 An England supporter on Washington Street celebrates their World Cup win today.
England joined the US in group C to advance into the final Round of 16 and will face Germany this weekend in a showdown for the ages against their historic foe.
Posted by SmartyJones at Wednesday, June 23, 2010
Sign of the Times: Mother England advances too
2010-06-23T22:13:00-04:00
SmartyJones
England advances in 2010 World Cup|
Comments

Sign of the Times: Zoning Board on Jefferson and 13th

Here's a photo today's Sign of the Times, a huge development taking up a whole block on Jefferson and 13th Street.  There was discussion about the desire for retail playing a role in the development.  Unfortunately, the presenter didn't feel the area would support such retail operations in the northwest section of town.

The board asked if he was an economist.  The gentleman said he wasn't, but had 30 years of experience in development.  Other than one NYU professor, most economists have missed the mark in recent years.  The man probably knows what he's saying.

Da Horsey didn't stay too long to find out if anyone knows how so many new people added to the area can withstand the lagging sewage infrastructure.  Uptown is becoming a nasal awareness zone as in be aware, your nasal passages are about to be assaulted.

This proposed project is massive taking up the whole square block.  No known timetable is even proposed at this point.  One observer speculated the developer may be looking to retain future rights without actually doing so in the near term.  The economy would certainly lend itself to that interpretation. 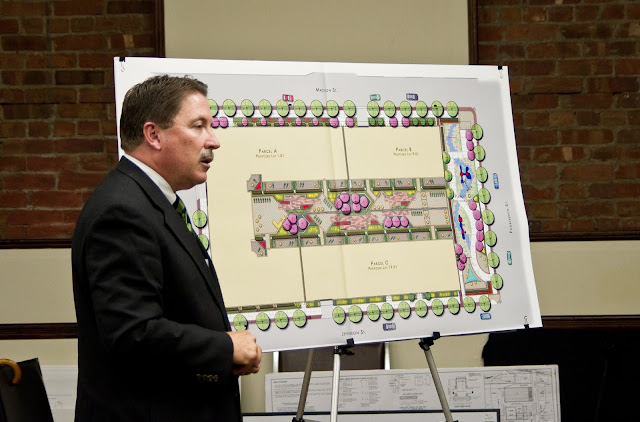 City of Hoboken announces:
REMINDER: TWO TRANSPORTATION COMMUNITY MEETINGS TONIGHT
Residents are reminded of two transportation-related community meetings taking place on Wednesday, June 23rd.
A community meeting to discuss transportation issues and concerns with residents will also be held tonight, Wednesday, June 23rd from 7pm to 9pm at the , .
Director of Transportation and Parking Ian Sacs will discuss transportation issues including the Hop (formerly Crosstown shuttle), car-sharing, traffic in , and more, and Mayor Dawn Zimmer will also attend to answer questions.
Also, an Open House on the Jersey City/Hoboken Subregional Transportation Study will take place from 4pm to 8pm at the , . Residents are invited drop in at any time to share their thoughts on improvements to the  area for drivers, bicyclists, pedestrians and transit users. More information is available at: http://www.jerseycityhobokenstudy.com
Get the latest  news:
Website | Facebook | Twitter | RSS

A break from the tedium of summer politics in Hoboken to note a historical win for the US in the World Cup.  Landon Donovan, one of the best players in US history scored in the games dying minutes to deliver a required 1-0 victory over Algeria.

The win advances the US in the Round of 16, a prestigious honor in international football (soccer).  The United States would have been eliminated had they not taken the late victory. With the big W, it sits atop Group C over England and its storied history in world football.

Landon Donovan a regular for the LA Galaxy most recently played several months in England's Premier League for Everton, the same club as New Brunswick native and goalkeeper Tim Howard. 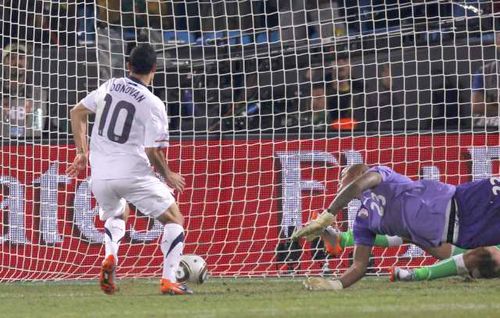 Landon Donovan putting away the winning goal.
In extra time, he scored a historic goal for the US earlier today

Related:  A site covering the tournament: the Red, White and Blue Army.  The US fan group is known as Sam's Army.  About 40,000 Americans are said to be in South Africa supporting the US run in the most world's prestigious sporting event.  One attendee was former President Bill Clinton.

More on the dramatic win moving the US ahead into the knockout round.

Unrelated: Hoboken Patch covered the events on the Municipal Garage.  Several sites under review are now on a list with both hope and concern about the possibility of pursuing a site in Jersey City.