Last night, Director of Transportation and Parking Ian Sacs held a community meeting at the Jubilee Center to discuss various issues with the public.  A few dozen members of the public attended the meeting to listen and ask questions on transportation and parking issues.

This video is one of several parts and focuses on the Hertz Car Share Program.  To sign up for the program and have easy access to a low cost hourly car rental, please sign up here:

For more details on the program go here:

The battle for the 4th ward council seat commences 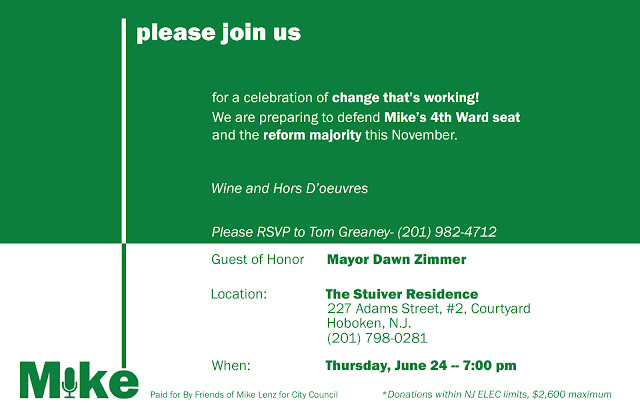 DIEGNAN, RAMOS, VAINIERI HUTTLE BILL CREATING MENTAL HEALTH FACILITIES EVALUATION TASK FORCE ADVANCES
Measure in Response to Proposed Closing of Hagedorn Psychiatric Hospital
(TRENTON) – Legislation sponsored by Assembly members Patrick J. Diegnan, Jr., Ruben J. Ramos, Jr., and Valerie Vainieri Huttle that would establish to create an evaluation task force for mental health facilities was released Thursday from the Assembly Budget Committee.
The legislators sponsored the bill in response to a line item in Gov. Christie’s proposed budget that would have closed the Senator Garret W. Hagedorn Gero-Psychiatric Hospital – the only geriatric psychiatric facility in New Jersey – at the end of the 2011 fiscal year.  Thanks to a budget compromise reached on the 21st, Hagedorn Psychiatric Hospital is no longer slated for closure.
“To put it bluntly, closing the only gero-psychiatric facility in the state is a mistake,” said Diegnan (D-Middlesex).  “The top priority of this task force must be to take whatever actions are necessary to keep Hagedorn open.  The patients and their families deserve nothing less.”
“Rushing the closure of Hagedorn would be foolish and dangerous,” said Ramos (D-Hudson) “We saw how past relocation efforts failed with Marlboro and Ancora and no one wants a repeat of those mistakes.  Before we take any action that will affect hundreds of mentally ill individuals we should be sure that they are absolutely necessary.”
“Rather than simply guessing, or approaching the problem piecemeal, the task force will provide us with concrete data on the status of New Jersey’s mental healthcare network,” said Vainieri Huttle (D-Bergen).  “From there, we will be able to clearly see the best way to efficiently, safely and cost effectively serve the mentally ill community.”
The decision to keep Hagedorn open was heavily influenced by the problems that arose following the closure of Marlboro Psychiatric Hospital in the mid-1990’s.  Despite a three-year, phased in closure, the Marlboro closing resulted in severe overcrowding at other psychiatric hospitals, which, in turn, created severe problems in the protection and monitoring of patients.  Hagedorn was scheduled to be closed in just one year.
The bill (A-2866) would establish the “State Mental health Facilities Evaluation Task Force,” which would, at a minimum:
The task force would consist of 21 members, including:
The task force would be required to hold a minimum of three public hearings, in the south, central and northern parts of the state, respectively, with support from the state Department of Human Services.  The task force would report its findings to the governor and Legislature, along with any recommended legislation no later than February 1, 2011.  Upon delivery of the final report, the task force would be dissolved.
The committee unanimously released the measure.  It now heads to the Assembly Speaker, who decides if and when to post it for a floor vote.
Posted by SmartyJones at Thursday, June 24, 2010
Mental Health Hospital to close?
2010-06-24T13:42:00-04:00
SmartyJones
Assemblyman Ruben Ramos Jr.|Hagedorn Psychiatric Hospital|
Comments

Hoboken Master Plan up to bat

PLANNING BOARD INVITES PUBLIC TO MASTER PLAN REEXAMINATION MEETING
The Hoboken Planning Board will hold a Special Meeting on Tuesday, June 29, 2010 at 7pm in the Basement Conference Room of City Hall, .
The Board is in the process of preparing the Reexamination Report of the Master Plan and the City’s Development Regulations. The Reexamination Report evaluates the community’s planning and development regulation documents and identifies whether the community’s policies or objectives have changed since the completion of the last Master Plan.
The Planning Board welcomes members of the public who would like to add their thoughts as to what the City's land use goals and objectives should be going forward and what new land use policies would help guide the City in the proper direction.
The meeting is an informational meeting only, and no formal action will be taken. The current Master Plan (2004) is available online at:http://hobokennj.org/docs/communitydev/HobokenFinalMasterlist.pdf
Link: http://www.hobokennj.org/news/planning-board-invites-public-to-master-plan-reexamination-meeting/
Posted by SmartyJones at Thursday, June 24, 2010

Mile Square View Exclusive
Although MSV printed the letter from an attorney representing Mile Square Towing seeking to toss his client's hat in the ring, it's far too soon to tell if the offer is real.  The location believed to be under discussion at 15th and Jefferson may not in fact even be owned by Mile Square Towing.
Unofficial sources indicate there's no clarity on any of the particulars in the location being proposed. 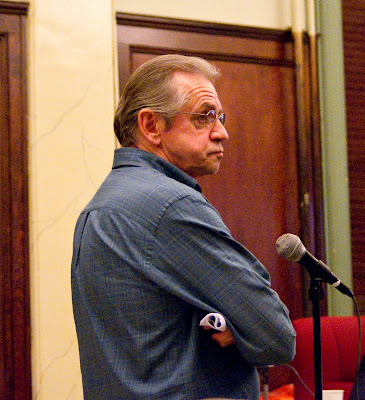 Mile Square Towing - a bonafide offer to the City?

The "owner" who spoke at the City Council about Mile Square Towing is not confirmed as the owner of the land where Mile Square Towing sits. The land may be subleased and may or may not be permitted in such an agreement to conduct such an offer with the city.

MSV is only confirming the details of an attorney letter not concluding on the viability of Mile Square Towing's possible offer here.  Much of the land in that area is actually owned by Academy Bus.

There's been no official offer put on the table as yet to our knowledge.
A related grist for the mill story is in the works.  Eat your lying heart out Hobo411.
Photo: A gentleman speaking at the special Tuesday meeting of the City Council mentioned Mile Square Towing as a possible site of the temporary garage.
All rights reserved.  Yes, that means you Perry of Hobo411 and any of your minions who "give" you this photo.
Posted by SmartyJones at Thursday, June 24, 2010

MILE SQUARE EXCLUSIVE
A late communication on the breaking entry of an industrial location for the temporary Municipal Garage is now official based on an attorney letter to the City.

MSV will have more on this late breaking development.  Based on the discussion at the last City Council meeting, it does not appear it would do so.  Hat tip: Perry Belfiore.

As of the moment the major concern is the City does not open itself to any legal jeopardy in examining this opportunity.  The tone of this communication expresses optimism and an open invitation for consideration  for the temporary Municipal Garage.

Bottom line: this could be a big win for Hoboken, but it's too early to say.

Update:  The attorney who wrote the letter is signaling a willingness to work with the city.  Although it's unclear where the negotiations may go, it's clearly promising.  MSV can confirm at least one other location thought to be tenable is now not being pursued by the city.  While discretion requires Da Horsey not to reveal the details of that information, people should know better by now where accurate information is made available and where propaganda and error reign.

Things are now moving and it's required for the temporary location of the Municipal Garage.  This location may or may not fit into a solution but it's a positive development being in the mix.

Don't let anyone tell you otherwise.


Talking Ed Note:  MSV made a decision to make this letter available for everyone.  If the hobo at Hobo411 is now using it with his minion to spin it into something, why would anyone be surprised?


Do you think Hobo411 and its minion interviewed anyone in Hoboken or in Jersey City since MSV posted this letter at 12:30 last night?  Of course not.  Maybe Perry and his little minion went out to walk Oscars but obviously they are doing their typical early morning lying when they took a copy of this letter from MSV.

(MSV allowed its distribution for the public but that's the last time it will happen unless it's necessary in the public interest.  Why give pathological liars the tools to lie again?)

Reader Catrina07030 notes MSV posted this information late last night and now it appears on Hoboken411 in the early morning.  She states it looks like it was lifted from here (with his ugly stamp on the document no less.)