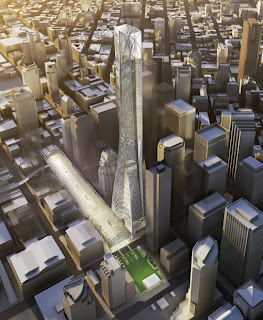 NJ.com reported today intent by the Rockefeller Group to build a 40 story building in the northwest section of Hoboken claiming the group had been working with city officials over the last two years.  Buried within the story was a dissenting opinion contrary to that development view from Mayor Dawn Zimmer.

Review of the two years of "discussions" reveals more from the Rockefeller Group's thinking, - they did invest two years of discussions with city officials, in addition to the mounds of money buying up property in that area.  The only problem would be it's past officials in the Mayor Roberts and Mayor Cammarano Administrations.  Discussions came to a sudden halt with ex-Mayor Peter Cammarano's resignation.

Last August, Councilwoman Beth Mason put forward a comprehensive commercial development covering a large section of the northwest of Hoboken including a minor league ballpark.  Skepticism arose from some members of the community about the prospect for any of that happening with low scale development when large parcels had changed hands in the neighborhood of $40 million.  A rough analysis showed development in scale with most of Hoboken was not financially tenable with those land costs.  Now the Rockefeller Group is showing their hand on the designs they have for Hoboken.

Mayor Dawn Zimmer has a different idea about any planned announcement this fall from the Rockefeller Group on a 40 story building going up as a centerpiece of their plans.

Here's the full context of the mayor's remarks originally from a June 24th exchange with Josh Marshall of NJ.com:


There have been no negotiations with the Rockefeller Group regarding their project by my Administration.  There will be no negotiations until a study has been completed, and a public process including all stakeholders has been completed in order to determine what kind of development our City would like to have in that area.
Once the City has completed this process and determined how it would like that area developed there is no doubt in my mind that we will have any problems finding a developer willing to build what the City and it residents envision for that area.   Given that the Rockefeller Group is a major land owner in the area, we would certainly consider them as a potential redeveloper with respect to whatever project the city determines is appropriate and in the best interests of its residents.
...That the Rockefeller Group had received buy-in from the Roberts and Cammarano Administrations – if that is the case, those individuals are no longer part of Hoboken’s government, and the promises they may have made will have no influence whatsoever on the decisions made by my Administration.
..., Hoboken is blessed with choices.
We are an amazing mile square city with views of Manhattan and easy access to the City; fabulous restaurants, bars, a thriving arts and music scene, diversity, and a small-town feel that makes our city very, very special.  For all these reasons, many developers such as the Rockefeller Group are interested in joining our City.
We as a community are going to decide on the direction for our city that respects our past, present and future.   Rockefeller is a stakeholder, and they will be a part of the process, right along side all of the other stakeholders that include the residents of Hoboken.

The National Weather Service has extended a heat advisory for  through 7 pm, July 6, 2010. Temperatures are predicted to reach up to 100 degrees.

To help residents cope with the extreme heat, the City of  is opening a cooling center at the  gymnasium at . The cooling center will open at noon on Tuesday, July 6 and will remain open for at least 24 hours.