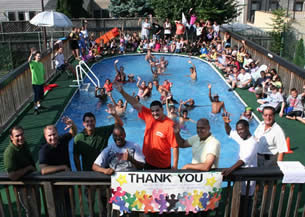 The Hoboken Boys and Girls Club's scheduled opening July 19th still looks far off in the distance with the recent heat wave.  But the usual grinder of hate and distortion from Hoboken411 churned out its typical "If you forgot, I really hate Zimmer" fare to log a complaint.

Isolation can do funny things to a person's psyche and in this instance once again the truth. The explanation on the six scheduled weeks for the pool's opening were timed to cover the heart of the summer, although a hoped for target date of opening July 1st was not part of this year's budgeted period.

Last year, the community rallied together fundraising to get the pool opened and it became a focal point for celebration in its opening as reported in the Hoboken Journal late July.

Now another Hoboken resident, Sean Iaquinto decided to get to the truth about this year's opening placing a few simple phone calls revealing the July 19th opening is less than a conspiracy by anyone in government and more a reflection of the tight fiscal times the city and most everyone recognizes in an extremely challenging economy.

Just last month at the last HHA Health Fair, MSV met with the heads of the Boys and Girls club where they recounted this year as being easily the most challenging in memory.

Photo: The Hoboken Boy and Girls Club celebrated a successful community fundraising effort, thanking those involved in the efforts.

Update: Several readers have noted they have the city's summer schedule, also posted here on the Hoboken Journal.  One noted the truth is not as interesting as your typical Hoboken411 lie.

Where was the outrage when the schedule was issued, oh back in May?

Related: Fresh off a fish related buying spree at Bed, Bath and Beyond, Grafix Avenger has moved on to dig into the latest plans at Hate411 to make a mountain out of a scheduled pool opening.

You almost have to feel sorry for Das Klaussen.  Every time he takes a shot into the poltical winds, he sticks his foot right into a pile of Oscar's latest creation.  Yes, that would be poo.