Office of the Mayor announces:
MAYOR ZIMMER TO HOLD COMMUNITY  AND  SAFETY IMPROVEMENTS AND BIKE AND PEDESTRIAN PLAN
Mayor Dawn Zimmer today announced a series of community meetings to involve residents in the process of shaping various important transportation-related initiatives.
The City of  has $240,000 in federal funding for improving safety along  between  and  as well as $2 million in federal funding to improve . The funding, which was secured by Senator Robert Menendez, was awarded in 2009, and due to the time-sensitive nature of the funds, community input is critical to moving forward with the projects. The City also recently received a grant from the NJDOT to work with a consultant to develop a Bicycle and Pedestrian Plan.
On Monday, July 19th from 6:00 to 9:00 pm, Mayor Zimmer and Transportation and Parking Director Ian Sacs will host a "Newark Street Safety Re-Design Community Workshop."
On Tuesday, August 3rd from 4:30 to 7:30 pm, Mayor Zimmer, Director Sacs, and consultants from The RBA Group will host a "Bicycle & Pedestrian Plan Public Visioning Meeting."
On Tuesday, August 17th from 6:00 to 9:00 pm, Mayor Zimmer and Director Sacs will host an "Observer Highway Safety Re-Design Community Workshop."
"Through these initiatives, we have the opportunity to make exciting improvements to our City that will ease congestion and traffic problems while making our streets more inviting and safer for pedestrians and cyclists," said Mayor Zimmer. "Community feedback is critical to the success of these projects, so I urge residents to come out and provide their input."
All three meetings are scheduled to take place at the , located at . The July 19 and August 16 meetings will mirror the public session held to solicit input on the plans for the  Viaduct. Based on public feedback, engineers will prepare conceptual designs which will be presented to the public at a second round of meetings. Construction plans will then be developed based on further feedback.
Additionally, Mayor Zimmer will be announcing public meetings scheduled for the early fall to both inform the public about the redevelopment process in general and include the community in discussing specific projects.
Link: http://www.hobokennj.org/news/mayor-zimmer-to-hold-community-meetings-on-newark-street-and-observer-highway-safety-improvements-and-bike-and-pedestrian-plan/
Get the latest  news:
Email | Text |Website | Facebook | Twitter | RSS
Posted by SmartyJones at Monday, July 12, 2010
Mayor to host community meetings on transportation safety
2010-07-12T19:35:00-04:00
SmartyJones
Community Meetings|Mayor Zimmer|Safety for bike and pedestrians|
Comments

Office of the mayor announces:
MAYOR ZIMMER STATEMENT ON PROPERTY TAX CAP
Hoboken Mayor Dawn Zimmer issued the following statement after the  legislature voted to pass a 2 percent cap on property tax increases:
“As I stated when Governor Christie visited  recently, there's nothing partisan about being smart and responsible with the money entrusted to us by our citizens. I thank the leadership in both parties and our  representatives in the legislature, Senator Brian Stack, Assemblyman Ruben Ramos, and Assemblywoman Caridad Rodriguez, for supporting this historic property tax legislation.”
Link: http://www.hobokennj.org/news/mayor-zimmer-statement-on-property-tax-cap/
Get the latest  news:
Email | Text |Website | Facebook | Twitter | RSS
Talking Ed Note: The Assembly voted to approve the 2% tax cap overwhelmingly in a 73-4 vote! 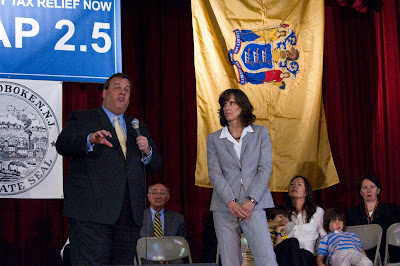 A vote is pending in the NJ legislature on a 2% tax cap advanced by Gov. Christie later today.  The vote differs slightly from the Governor's earlier proposed 2.5% cap where less restrictions on exceeding the limit would be imposed.


Hoboken's Assemblyman Reuben Ramos should be placing his vote today.  You can email him here to indicate your desire on the bill:


In a twitter last week, Mayor Zimmer thanked both sides of the aisle in working together to push ahead the cap after the State Senate voted to support the cap.  A 2% cap would limit the amount property taxes could be hiked in the future.  New Jersey unions have been vocal in opposing the cap airing commercials across the state.


Update: On July 8th Mayor Zimmer participated in a State conference call foreshadowing passage, "Just finished conference call with Governor Christie and mayors across state.  Thank u to leaders of both parties for this historic hard cap."


2nd Update 11:30 - An aide to Assemblyman Ramos indicates he will be voting in favor of the cap.


11:35 - Talking Ed Note: With passage of the cap imminent, Mayor Zimmer's gambit to be first to support Gov. Christie's tax cap puts her high along with Hoboken on the favorable list with the Governor's office.  Legislation of such magnitude carries with it long memories and Mayor Zimmer was first in Hudson County to get on board hosting the kickoff of the Governor in his statewide tour pitching a tax cap.


This bipartisanship will also be helpful to New Jersey having just managed to cover an $11 Billion budget deficit, that's billion with a capital B.  New Jersey is moving in the right direction, finally.

Related: NJ.com reports on the expected vote.
Tom Moran, the infamous reporter who moaned about the Governor's tone, now moans over the shambles of the opposition as the Governor's proposal has earned widespread support throughout the state.
Not to worry Tom.  I can see November from my house.  So can others. 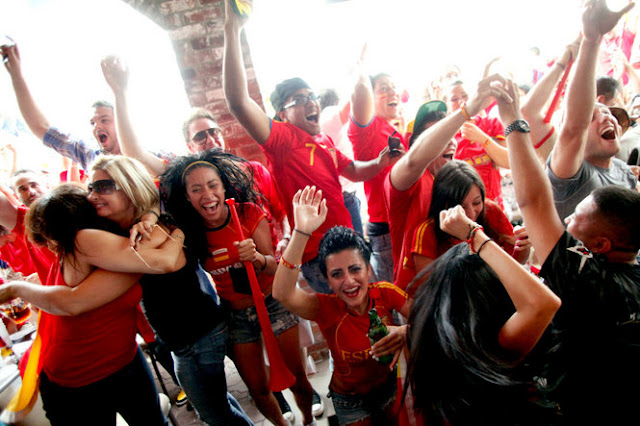 Spain, a nation to this point of underachievers in the World Cup broke through the wall yesterday with its overtime victory in the World Cup final over the Netherlands.  The victory made the nation not only world champion but the first to see defeat in its first match and claim the tournament's top prize.

Italy the defending champions, lost its first match 1-0 in 1994 to Ireland at Giants Stadium and officially drew 0-0 with Brazil in the final losing on a penalty kicks decider.  Da Horsey attended both matches, actually all of Italy's matches across the US on the way to the Rose Bowl in Pasadena.  1994's World Cup pony express included seven cities and 14 World Cup matches.  Number 15, a battle of the lowlands between Belgium and the Netherlands was missed when friends said stay in San Francisco for the weekend instead of taking a red eye from San Francisco to Florida for a match the next day.

In Hoboken, Washington Street was littered with fans wearing jerseys of many nations after the final.  But the Spanish fans wearing Spain's familiar red jerseys had a special pride.  One we addressed with a simple "Viva!" and a V for victory sign outside Johnny Rockets produced a enthusiastic response in Spanish.

Congratulations to Spain, their fans and the country of South Africa for a great World Cup.

Related:  Here's a story on what it means to Spanish fans here in the Ironbound district of Newark where many Spanish fans gathered to watch the match.