And who's bloody idea was this?

We're digging through the carcass of the mess last night on some of these appointments and there's more to come.  Our friends at The Association are just having a grand old laugh over these developments.  They are doubled over and laughing at how we are being tooled.

How does it feel to be a tool for the exploitive end of Hoboken?

As we're weeding through the quagmire at Da Sewar, we're stuck with this gem of a choice, Marianne Camporeale, a senior from Fox Hills rammed through for a slot on the Hoboken Housing Authority.  Can someone tell me what she brings to the table?

The only qualification we know of is in the description brought to us by the Wiley Coyote, Eric Kurta who parked this gem on youtube with the zinger, "Yuppie-hating Marianne "I hate Newcomers and New Yorkers" Camporeale, senior citizen and Zoning Board member, is spitting mad."

Which may explain why Hobokenite politico Perry Belfiore is so fond of her. We'll let Perry address that at his own convenience.

More of the new face of reform. Marianne ploughed through the council on a 9-0 vote.
We're expecting Marlon Brando to pop out and make a ghostly appearance any time now at future City Council meetings with a reprise of some of his classic work "On the Waterfront."

Update: A reader questioned the blurb from the youtube.  Here's the details on the earlier appointment:

December 29, 2005
The Honorable Members of the City Council
City of Hoboken
94 Washington Street
Hoboken, NJ 07030
Fear Ladies and Gentlemen:
Zoning Board of Adjustment
Pursuant to my authority under Chapter 44, Section 11 of the Hoboken Code, I hereby reappoint
the following individuals as members of the Hoboken Zoning Board: Marianne Camporeale to replace Thomas Foley who resigned the four (4) year term which expires December 31, 2006,

Update 2: Some greatest hits from the new HHA appointee (the Hudson Reporter):


I do not want Zimmer to represent us
10.09.07 - 03:06 am
Dear Editor:
Surprise, surprise - Dawn Zimmer had to step down or face trial. Maybe now she will realize that all election rules must be obeyed. Judge Gallipole checked all the evidence and determined that there were many questionable actions on her part.
Fourth Ward voters now have the opportunity to re-elect Chris Campos, a proven, honest leader. Zimmer needs to put her ear to the ground and hear the rumblings coming from residents of Hoboken Housing in the Ward. They do not like her. They especially dislike her tactics against Chris who lived there and is a familiar, well loved presence.
Zimmer has done nothing for the 4th Ward. What does playing ball in Maxwell Park do for the 4th Ward? Her biggest "achievement" on the Council was her vote against accepting $18 million from the Port Authority! Her allies were told at the Council meeting of September 5, 2007 that actions like that if repeated, will mobilize voters to demand a recall.
Unlike Zimmer, Chris has much to be proud of. His leadership got Hoboken Housing out of serious financial difficulty. The Boys and Girls Club as well as the Jubilee Center have honored him with commendations and awards for his dedication to providing safe recreational opportunities for all children.
Fourth Warders unite. Defeat her soundly. Send her back where she came from. Hoboken voters want honest, corruption free elections. They do not want wealthy cheaters!
Marianne Camporeale


As MSV had singled out Perry Belfiore by name in the post, his reply has been posted within the original story on the basis of fairness and prominence.


Roman, I am very fond of Marianne and believe she will be a great addition to the Housing Authority. Apparently, so did nine members of the council, yet they were not called out by name. Fox Hills is becoming an armed camp and only a strong center will hold that building together. Marianne can be that force. Of more concern is Eric Kurta continuing to beat the drum of polarization. There are no absolutes, no monoliths denigration through guilt by association should be shunned in favor of accepting people for who they are not what group they belong to. Marianne wrote and signed a letter opposing Zimmer, that is her right. Marianne should be allowed time to perform her duties and encourage to succeed absent knee jerk criticism.

Mayor Zimmer - one board position per person

Mayor Zimmer in a brief phone interview with MSV earlier today stated her strong preference that board appointments in Hoboken be strictly made along the lines of one person for one board position.

"It's best from a policy position that it should be one person for one board based on all the great people we have in Hoboken," she said regarding questions surrounding last night's appointments.

"Unless there's extenuating circumstances requiring it, people should be appointed to one board," referencing the City Council's appointment of Tony Soares, current Zoning Board President to the North Hudson Sewage Authority.

Regarding the role of the City Council on appointments the mayor stated, "I respect their decision.  I think Mr. Soares has been a good chair of the Zoning Board."

Instead Tony Soares, the current President of the Zoning Board got the City Council approval from an unlikely mix of votes.  Council members Ravi Bhalla, David Mello, Beth Mason and Nino Giacchi voted against Soares' appointment.

After his appointment, Tony Soares was seen outside City Council Chambers having a long chat of about half an hour with Michelle Russo, mother of Councilman Mike Russo.

Michelle Russo also spoke to other politicos in the City Council Chambers.  She sat in the back rows with former resident of Church Towers, Irene Smith who had sought a position on the Zoning Board.  She was quickly approved as a fourth alternate shortly later. 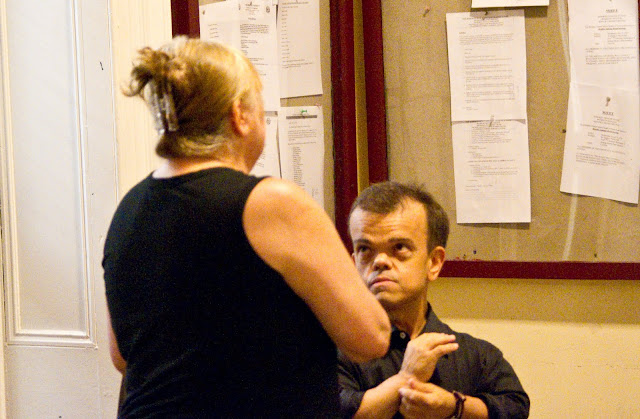 Related: Hoboken Patch.com also spoke to the mayor on this story.

Talking Ed Note: Last night in an email exchange with Tony Soares, MSV stated its preference on what should be acceptable in taking a role on Hoboken Boards.  (Those details are not being revealed for the moment.)

In an email exchange earlier today surrounding concerns on health care benefits for the role on the sewage authority, Tony wrote, "Employees on boards can not get healthcare."


Tony has offered to do an interview and MSV has asked for some timing options.

So what is reform?

People define reform in many ways.  Last night's meeting included a number of appointments and has created a backwash of murmurs throughout what can be described as the activist and/or reform community?

This is an open thread to discuss what you believe Hoboken reform means and what it's future should mean.

MSV is working on a story in this regard.  In the interim, Da Horsey wanted to make sure you knew, we are already hearing you, loud and clear.

Here's some questions swirling regarding a number of appointments made by the City Council last night.  If one was to ask the community that worked so hard for change what they thought, one could say there's some real questions emerging now.

Let's not focus on just process or improving such, that should be moving along.  Is it?
Seems like it was only yesterday Hoboken moved to decentralize the power of the Zoning Board because a mayor's authority was too centralized and open to corruption proved true in our sad recent history.  It was said it's better to diversify that power among a nine member body?  So are we now advocating centralized power again?  And why? 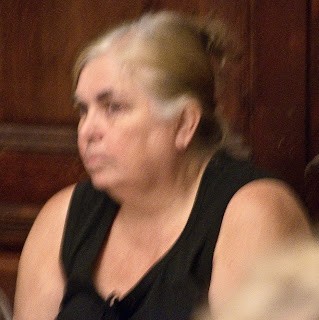 Councilwoman Carol Marsh moved into the role of City Council President last night.  The Councilwoman has been a measured voice on the Council and was quick to use the gavel early on and maintain order.

Council persons need to obtain recognition from the Council President before they speak under the Robert Rules of Order.  The new Council President showed a deft touch and keeping a meeting rolling along is part of that position's responsibilities. 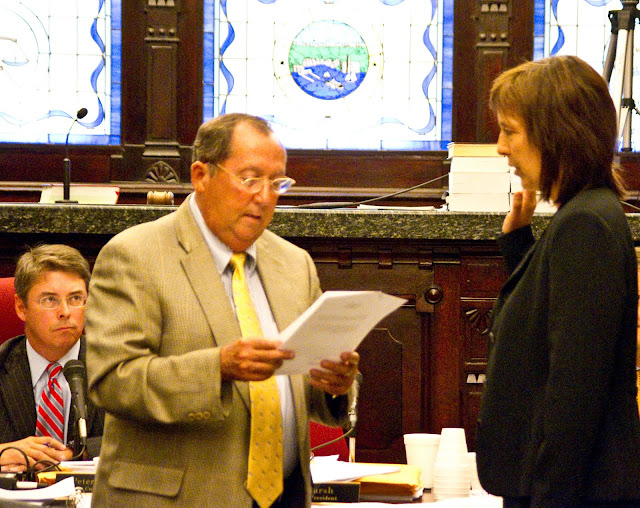 In a proud moment Police Chief Falco described as the pinnacle of success for a police officer, Officer Bret Globke was awarded a proclamation in City Council Chambers for his work in saving the life of resident Mo DeGennaro.