Is the City Council Second Board Appointment Illegal?

MILE SQUARE EXCLUSIVE
In the controversy of Hoboken Zoning Board President Tony Soares' second board appointment last Wednesday in the City Council to the Hudson Sewerage Authority, there's now questions arising on the validity of the City Council's action.  The problem stems from the fact it is against the City Council's own written policy to approve a second board position and the action itself may be illegal.
Based on existing policy as clearly stated on the City Clerk's application, the legality of the City Council's vote to give a second board position is now very much in doubt.
Page two of the application clearly states "City Council policy allows individuals to serve on only one standing board or commission at a time."  As indicated in an exact copy below on page two of that document, the top portion asks if there is any conflict the applicant has for the position.
Hoboken Board Policy Requirement
With Tony Soares already President of the Zoning Board, the legality of the City Council vote to authorize a second board position is potentially problematic.  Although the North Hudson Sewerage Authority (NHSA) is a county body, this board position represents Hoboken, the process is generated through Hoboken, conducts its meetings in Hoboken and is approved by the City Council as are all Hoboken board positions.
In a brief phone interview with Tony Soares this morning, the newly appointed board member stated he was well aware of the statement on the application itself and found it to be contradictory.  "I read it and asked about it.  I'm not a lawyer.  The city attorney knew this on Thursday and no one has talked about it," Tony explained.
Corporation Council Michael Kates was not available today but a lawyer on his team stated it was not clear what the legal policy is offhand and would investigate the matter. It's an open question if there is a corresponding Hoboken ordinance at the time of the vote supporting the stated City Council policy on the application.
Last Thursday Tony Soares attended his first North Hudson Sewerage Authority meeting as a full participating member.
The City Council members voting in favor of Tony Soares' appointment to a second board position were Council members Mike Lenz, Carol Marsh, Peter Cunningham, Mike Russo and Terry Castellano.
MSV has contacted the members who voted in favor of the appointment to inquire about the clearly stated City Council policy on the application and why they ignored it in voting an additional board position for Tony Soares.
The complete two page document can be found here:
http://hobokennj.org/docs/board/application_for_appointment_to_boards_and_commissions.pdf
State legal requirements mandate certain overlap such as a member of the City Council needing to be on the Planning Board.  Other arguments regarding the "synergy" of having multiple board positions fail to address that existing board members are allowed to attend other board meetings and participate on a public basis.
This story is breaking...
.
Posted by SmartyJones at Sunday, July 18, 2010
Is the City Council Second Board Appointment Illegal?
2010-07-18T10:30:00-04:00
SmartyJones
Hoboken City Council Board Policy|North Hudson Sewerage Authority|Tony Soares|
Comments

NY Times up front and personal with Hoboken's Corner Cars 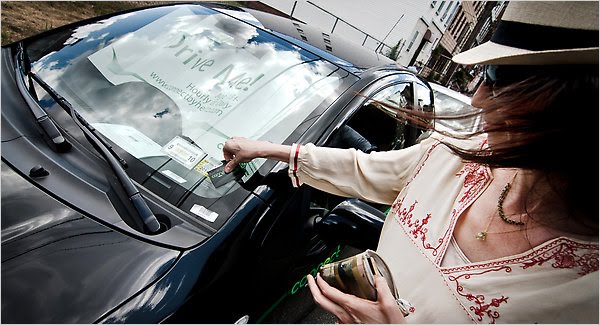 Hoboken's Corner Cars program is making more waves, this time in a nifty feature in the Sunday New York Times.  They take some vehicles for a test drive and examine the culture of car sharing and the uniqueness of the program and its tremendous accessibility.

There's something odd but novel in walking to a place in your neighborhood waving a card over the front windshield and driving a car you've never seen before where you like to where you want in the $5 to $16 per hour range.

Some humorous aspects as well with one author comparing a possible developing culture to moving from owning a library of CDs to a pay for what you use streaming model over the internet with music.  This in comparison to another person's study of car ownership in New York City during the 70s and 80s. In his study even with the heavy costs and problems of keeping a car he noted the unique psychology of New Yorkers who saw themselves above the folks using the tube (subway).  He said the psychology was found nowhere else.

In Hoboken, we're pioneers though not curmudgeons.  Well at least many of us.

Learn more and sign up at a discount for the Hoboken Hertz Connect Corner Cars at:

No insurance, no hunting for parking, no oil changes and a $100 credit if you return a Hoboken car permit when you sign up for the program.

Cuz we are the Champions...

MAYOR ZIMMER & MARIA PEPE CONGRATULATE “ SHOCKERS” SOFTBALL TEAM
Mayor Dawn Zimmer congratulated the Hoboken Shockers this week on winning the  division championship. The Babe Ruth 16 and under girls softball team was undefeated in both districts and states and will be playing at the Middle Atlantic Regional Tournament in Egg Harbor this weekend.
Team members Sybil Lynch, Jade Bracero, Natalie Classen, Samantha Maldonado, and Ashley Andujar were also congratulated by Maria Pepe, the Assistant Comptroller for the City of  and nationally-recognized trailblazer for girls sports.
In the 1972, 11 year-old Maria Pepe became one of the first girls to play Little League when she tried out and joined the Young Democrats team at the invitation of coach and now Hoboken Clerk Jimmy Farina, an act ESPN ranks the 5th greatest moment in women's sports. Girls were banned from playing at the time, and after pitching just three games, she stopped playing because Little League threatened to revoke 's charter. The National Organization for Women (NOW), with the approval of her parents, took up Maria’s cause, and after two years, won the court case in  which set the stage for Little League to change its charter to allow girls to participate in their programs and led to the creation of a girl's softball league. Maria was too old to continue playing in the league, but millions of girls since have benefited from her actions.
“I am very excited for the girls and appreciate how much it means to them,” said Maria Pepe. “I am proud to see how far the girls softball program has come since the ruling, I still do get choked up about it.” 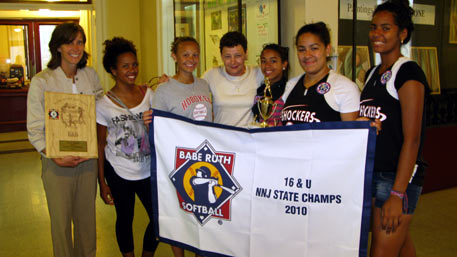