While trying to get some photos of the sea of yellow shirts filling City Council Chambers before the meeting, we captured some video with PBA President Vince Lombardi addressing members and supporters.

After we had a brief chat and discussed some of the concerns he felt were not being heard by the public.  His main point was the report the union prepared was not fairly evaluated.  He said the report was perhaps too long and an executive summary was missing and would have been useful.  He accepted an invitation to have it posted here if one is issued.

Talking Ed Note: The discussion with Vince Lombardi was cordial and polite.  If he (or anyone) considers MSV to be one of the blogs providing inaccurate information, there's no problem here providing a forum for that discussion too.

Looking forward to it.  Hoboken deserves and demands an open discussion of ideas and MSV is insistent on providing it without censorship.

Free parking in Hoboken due to weather advisory

City of Hoboken announces:
WIND ADVISORY AND FREE GARAGE PARKING FOR FLOOD-PRONE AREAS
The National Weather Service has issued a Tropical Storm Watch for our area. Although the center of Hurricane Earl is currently expected to pass east of the area, impacts such as strong winds and flooding are still possible.
In anticipation of the potential for flooding, the City of  is providing free parking in Municipal Garage B (located on  between  and River streets) from Thursday, September 2nd at 8:00 pm through Saturday, September 4th at 11:00 am for residents in flood prone areas with a valid residency parking permit.
Wind Precautions
High winds are possible in  this Friday, September 3rd. Be sure your property (including construction sites) is secure.
Bring in unsecured objects from patios and balconies and secure outdoor objects such as lawn furniture or garbage cans that could blow away and cause damage or injury.
The safest place to be during high winds is indoors. If at all possible postpone outdoor activities.
Watch for flying debris. Tree limbs may break and street signs may become loose during strong wind gusts. Keep an eye toward nearby balconies for loose objects that may fall.
Report downed lines to 201-420-2007 ( Fire Department) or 911 for assistance. Do not try to free lines or to remove debris yourself.
Avoid anything that may be touching downed lines, including vehicles or tree branches. Warn others to stay away.
Flood prone areas of Hoboken
·        Observer Highway & Marshall Drive, , &
·         &
·         &
·         from  to
·        First Street &
·         at  and
·        Third, Fourth & Fifth streets &
·         from  to
·        Second Street &
·        Eighth, Ninth & Tenth streets &  (area surrounding Shop-Rite)
·         &
Link: http://www.hobokennj.org/uncategorized/wind-advisory-and-free-garage-parking-for-flood-prone-areas/
Get the latest  news:
Email | Text |Website | Facebook | Twitter | RSS 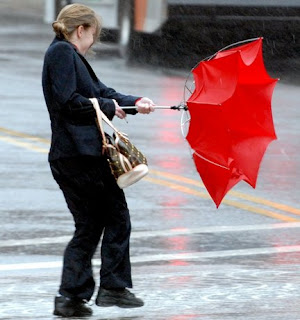