2010 National Night Out in Hoboken

Hoboken had a very successful National Night Out evening with well over 1,000 people participating.  Here's a video submitted from producer Ben Barbro.

The ties built between the Hoboken Police Department and the community are building blocks to make Hoboken a stronger, safer place.
Posted by SmartyJones at Monday, September 27, 2010
2010 National Night Out in Hoboken
2010-09-27T21:39:00-04:00
SmartyJones
Hooken National Night Out|
Comments

Mayor Dawn Zimmer and the the City of Hoboken are proud to host the Hoboken
Fall Arts & Music Festival on Sunday Oct. 3, 2010 from 11am to 6pm.
Admission is free. 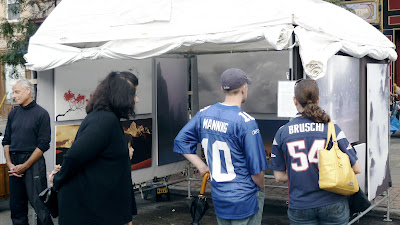 The fair will take place on Washington Street between Observer Highway and
7th Street and will feature more than 300 artists, sculptors, photographers,
craftspeople, local businesses, restaurants, and food vendors as well as
rides, games, face painting and much more. Visitors are strongly encouraged
to arrive via public transportation.
http://www.hobokennj.org/visit/how-to-get-here/

* Special section with Fine Artists located between 2nd & 3rd Street,
so if you are an Art collector, this is the place to be.  Oil paintings,
watercolors, acrylics, sculpture & much more

* Lots of great Food throughout the Fair such as: Thai, Indian, Greek,
French, Mexican, Cajun and Italian.

The festival is only 3 blocks from all public transportation including:
PATH, NY Waterway Ferries, NJ Transit Trains & Buses & Hudson Bergen
Lightrail.
For more information call 201-420-2207 or check us out at www.hobokennj.org 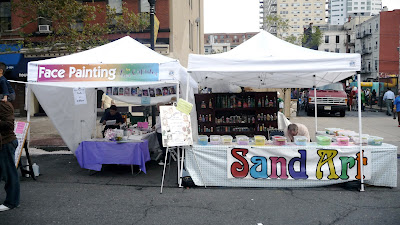 Mayor , The City of ,
The  Reporter,
and the  Division of Cultural & Heritage Affairs
present
The  30th Annual Artists Studio Tour
Free Self-Guided Walking Tour of Artists Studios,
galleries and community exhibition spaces
Sat & Sun Nov. 6th & 7th
noon until 6pm
There is still time to get involved.
We are looking for artists, photographers, sculptors, musicians, art students and more.
You don't need a studio to participate. There will be lots of community spaces to exhibit or perform in.
If you are a local business, there are opportunities for your involvement as well.
Call 201-420-2207 to get an application.
www.hobokennj.org 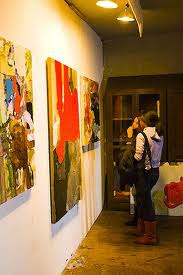 After a week of waiting for a response, 4th Ward Councilman Mike Lenz once again calls on his opponent, Timothy Occhipinti, to respect the voters of the 4th Ward and sign a Clean Campaign Pledge.
Councilman Lenz stated, “In this week’s Hoboken Reporter, Tim sidestepped, saying that signing a Pledge not to pay for votes and to submit complete ELEC reports was ‘silly’ and ‘not worthy of a response’.  He said that we should ‘talk about the Issues’ instead.  Well Tim, Corruption IS an issue here in Hoboken. As someone who has been in Hoboken for over 20 years, I am extremely disappointed that even after two of our last three Mayors went to jail for taking bribes, and the third Mayor hired a parking Authority Director who stole over a million quarters; Tim doesn’t believe that running a clean campaign is something the public deserves and has a right to expect."

Voters in the 4th Ward have been used by ‘business as usual’ politicians and forgotten again until the next election for too many years.  It’s time in Hoboken to address the deep seated problems, legally and ethically, of paying for absentee votes.  Former Mayor and current Inmate Peter Cammarano has become the poster child of Hudson County corruption but he was not the first and he did not do it alone.   The refusal of Occhipinti to sign the Clean Campaign Pledge is disappointing.

“I call on Tim to disown these tactics and sign the Clean Campaign Pledge.  If he has problems with certain parts, let’s discuss our differences and come to a common ground.  Tim can lay out all the campaign promises he cares to but without demonstrating respect for the Law and the voters, his words are meaningless.
The residents of the 4th Ward deserve an election they will believe is based on respect for the law and appearances matter.  Given the unfortunate history of both proven and alleged fraud in past elections, if someone able-bodied is getting paid by the campaign (full-time staff or temporary) on Election Day, they should not be voting absentee PERIOD.  Tim may not have been around long enough to know the real problems in Hoboken with corruption and illegal activities, but until he can agree to run a campaign free from the appearance and possibility of buying votes, there is no bigger Issue in this Election.”

From the office of Ravi Bhalla:

Dear Friends,
If there is one thing everyone should know by now about our Hoboken Mayor, Dawn Zimmer, it is this: she is a true leader that does not shy from making the hard decisions that strong leadership and real change require.  Whether it's taking meaningful steps to reduce our tax burden, reforming the way we develop in Hoboken, or offering innovative solutions to problems like parking and flooding, Mayor Zimmer has shown that she has the will and determination to move our city forward.
It is for this reason that I ask you to join Mayor Zimmer in celebrating her accomplishments on Thursday, September 30th from 7 pm to 11 pm at Teak Restaurant in Hoboken.  At this event, Mayor Zimmer will welcome the Honorable Cory A. Booker, Mayor of the City of Newark.  This is a great opportunity to meet two of New Jersey's trailblazing muncipal leaders, while also supporting Mayor Zimmer in her efforts to improve Hoboken for all of its residents.
For more information, and to RSVP, please go to:
http://zimmerforchange.com/images/uploaded/INVITErevWEB520w.jpg or

I hope to see you then!

A race for "the heart of Hoboken"

And nothing makes for stranger bedfellows in politics than the Hoboken scene.  Here is a screen capture of Councilwoman Beth Mason exiting the start of the Friday press conference.  Mayor Zimmer had just begun introducing her team and guess Beth knew she wasn't in those notes.


Ironically, even though Beth Mason isn't on "the team" the mayor was announcing, she got a mention for being present anyway.

Here's a link of the video someone was shooting for the Mike Lenz for City Council campaign:

Friday's police presser good news for Hoboken, but not for everyone

Friday morning's press conference on the police was no regular Saturday matinee.  There wasn't much time to dig in as the media advisory had gone out only the night before.  But being an outsider has some distinct advantages.  You can look at the situation just like any member of the public and in so doing ask some questions the public might have and more importantly seek.  It's an important role for the press to play.

So just as this big shindig was about to kick off, the mayor comes down the stairs followed by her administration, several of her council allies (who took some heated grief in arduous City Council meetings) and a group of HHA members along with Executive Director Carmelo Garcia.

Now what's wrong with this picture?  Okay, can you identify what doesn't quite fit?
Well if you look at the upper right side of the photo, it looks like the Administration and HHA lineup has been hijacked.  Minutes earlier, Councilwoman Beth Mason was on the phone and seemed content to watch the event with other spectators but suddenly she found inspiration.  She navigated past Da Horsey and cameras and went up the stairs and decided this might be actually good news and hey, did you see all the TV cameras?  This is going to be one helleva photo op.

But wasn't Beth Mason opposed to the Zimmer administration's plan to overhaul the police department?  Didn't she applaud in a City Council meeting just days earlier there should not be one layoff, her rightsizing plan from her mayoral platform  a year back be damned?  Well it looks like it's her.  Or maybe it's a double.  Why would Beth Mason an ardent supporter of well, all things Beth Mason be joining in and standing behind Mayor Zimmer?  Okay, let's double check the film.

Okay, that's definitely Beth Mason and she's apparently caused some confusion with Public Safety Director Alicea who has turned halfway around somewhat confused with the party being crashed.  MSV didn't see any words exchanged, but Beth seems to be communicating a message of her arrival on the scene.

As the event was just beginning, it didn't seem Mayor Zimmer was aware of the new addition to her group.  Then without warning and not a minute into the proceedings, Beth Mason decided she was no longer for this Mayor and the administration and bolted seconds into the event commencing.  Did her purple pluming poodle Lane Bajardi give her a signal to get the heck out of there?

Beth Mason can probably answer the question herself, but she jetted during the introductions.  She apparently realized as the mayor was going through the list of names written into her speech of those present and Beth Mason wasn't going to be named or credited.  Ironically, Mayor Zimmer saw her floating about and politely added her into her remarks.

Perhaps this confusion can also be chalked up to an old Brady Bunch episode.  Substitute Dawn for Marcia. Beth Mason will be playing the part of Jan seen below.


Talking Ed Note: Still no video on Friday's presser from the self-described "most complete website for news and business" over at Hate411.  Is the little angry ghostwriter feeling okay?  The site of hate for all things Dawn Zimmer is losing its intensity.  There's a brief note now even admitting the police jobs are saved "for now" but it gives the credit to Police Chief Falco and Hoboken Resident Perry Belfiore.  MSV respects Chief Falco but he handles the controls leading the day to day operations, he doesn't have a hand in executive decisions such as layoffs and neither would citizen Perry Belfiore.

For the record, MSV filed an earlier exclusive noting for the record City Hall had made a commitment to saving jobs based on retirements.  On Friday, 13 such retirements were announced as part of a plan that will save all the police jobs.  As long as the final seven of those commitments follow through as anticipated, Hoboken will not see the loss of any of the youthful vitality on the police force.

Although Hoboken411 has all the video, they can't use it.  Otherwise people will conclude like most everyone else, it's actually good news.  Instead, they weave their typical political conspiracy, courtesy of the little angry man.
Posted by SmartyJones at Monday, September 27, 2010
Friday's police presser good news for Hoboken, but not for everyone
2010-09-27T08:40:00-04:00
SmartyJones
2010 Hoboken Mayoral Election TBD by Beth Mason|HHA Executive Director Carmelo Garcia|Hoboken Mayor Zimmer|Hoboken Police Department|Lane Bajardi|
Comments

On Saturday, Team Occhipinti held its official opening of its campaign office on lower Monroe Street for the November 2nd special election.  But there's other news equally if not more important.  Tim Occhipinti has named Jamie Cryan, a fourth ward resident as his campaign manager. 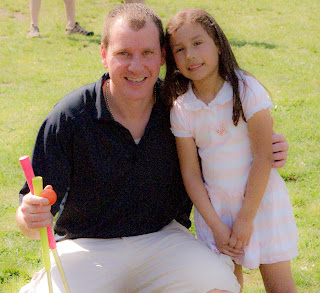 Da Horsey met Jamie back in May at a health fair event held on Mama Johnson field.  He helped out at the event and is looking to bring a positive campaign focusing on the issues and constituent service in the ward.  Government service is present in the family too.  Jamie's cousin is Union Assemblyman and majority leader Joseph Cryan representing the 20th Assembly district.

The real star of the family though is his beautiful daughter Andria, pictured here with her proud dad.