Tonight's regular meeting of the City Council is jammed and promises to go on for a long while.  Get the coffee pot up and going early and head on over to our colleague, the Hoboken Journal for a fun filled knock'em, drag'em out cat fight.

The last special council meeting had only a few items on the agenda with a closed session on the legal matters of the Municipal Garage being one, but that didn't stop members from bitterly denouncing being there when one agenda item, the Western Edge redevelopment was tabled after a few members of the public asked for more time to provide input.  (Hopefully more residents will evaluate and come back and constructively bring some good ideas to the table. Developers such as Tarragon/URSA are believed to be already executing expensive live push polls to sabotage the existing plan altogether!)

If that isn't enough of an incentive to stick around, the November 2nd special election is now less than a month off with not only the fourth ward council seat at stake but the mayor's working majority coalition.  Based on the bitterness being voiced at the last meeting you would think there is no fifth vote swing vote in the balance at all!  But no, that's just the Old Guard crying about today; family business has been slow but was recently spotted out and on the town to hold a press conference on one of their favorite areas: the Hoboken Parking Utility.

Councilman Mike Russo led the media on a mad chase circling their own "tale" on a rumor some office space would be moved from the termite infested office downstairs in City Hall to a midtown office he deemed remote and well, not midtown.

At the last council meeting Da Horsey requested sanity and respect for the will of the voter.  It's likely it was heard but do you think it will be acted on?

Hey, did you hear about the $200 million budget surplus?   Well okay, that's imaginary but that never stopped some council members from playing loose and fast with the facts, nor their feigned John Q. Public political operatives who pose as regular Hoboken citizens.  Let the droning begin!

Expect a cat fight to break out anytime.  Well one already did earlier today.

"It’s great that we can finally have a conversation with one of the real candidates in this election, Maurice Fitzgibbons, and not his current straw man, Tim Occhipinti.  Its very telling that instead of Maurice talking about why Tim would make a better candidate for the 4th Ward, he has to talk about himself and his reputation.  He is all but admitting that as he sees it, this campaign is not about Tim Occhipinti, it’s about the Cammarano team that he has surrounded himself with.

We once again call on Tim Occhipinti to sign the Clean Campaign Pledge and run a campaign that respects the voters of the 4th Ward.  We hope that Tim will reconsider the advice he is receiving from his mentor Maurice Fitzgibbons, who was recently convicted of flagrant and intentional ELEC violations and fined $2,625, and make the best decision for the 4th Ward.  The voters deserve more than Cammarano/Fitzgibbons/Belfiore style politics and business as usual."
Posted by SmartyJones at Wednesday, October 06, 2010
Lenz campaign responds to Maurice Fitzgibbons
2010-10-06T13:29:00-04:00
SmartyJones
Lenz campaign manager Sam Briggs|Lenz for council|
Comments 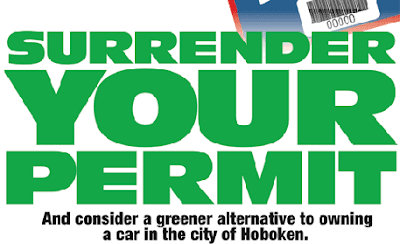 LAUNCHES “SURRENDER YOUR PERMIT” INCENTIVE PROGRAM TO ENCOURAGE CAR-FREE LIVING
Residents who turn in a parking permit will receive incentives valued at more than $500
The City of , in conjunction with car rental and car sharing companies, regional transit agencies, and local businesses, is announcing the “Surrender Your Permit” program (http://hobokennj.org/surrenderyourpermit) to encourage residents to consider alternate modes of transportation. Those who surrender a parking permit at the Hoboken Parking Utility will receive an incentive package valued at more than $500.
“Over the past year, we have been working to tackle Hoboken’s parking and transportation challenges by implementing a comprehensive set of progressive, demand-side alternative transportation solutions including the Hop shuttle system with GPS technology, the first city-wide car-sharing program in the nation, multi-space meters, expanded bicycle facilities, and pedestrian safety improvements," said Mayor . “This program is an integral component of our efforts to provide residents easy and practical options for living car-free in . We’re letting residents know that there can be more convenient, less expensive, healthier, and more environmentally friendly alternatives to owning a car in , and we’re going to continue to work to provide residents with better options."
Benefits of the Surrender Your Permit program include:
Other businesses and agencies interested in participating in the program by offering additional rewards may contact parking@hobokennj.org.
Even before the formal announcement of the Surrender Your Permit program, nine residents have turned in residential parking permits to the Parking Utility since the launch of Corner Cars.
“This is an important incentive to announce now that Corner Cars has been around for a while," said Councilman , Chairman of the Parking and Transportation Committee. "As people learn about the program and lease terms expire, I'm confident that through this extra incentive we will get the additional 33 permits we need to break even with the 42 parking spaces used by Corner Cars, leaving no doubt that this program represents a clear benefit to our community. That's before we consider all the future residents who don't bring cars to  and all the existing residents who decide against buying a car, which we may never be able to accurately account for."
More than 500 residents are now members of the Corner Cars program. Connect by Hertz recently announced that they are extending the $5 Tuesdays promotion ($5/hour rental for any vehicle in ) through the month of October.
Who benefits from ’s alternative transportation options?
Residents can learn more about the program at http://hobokennj.org/surrenderyourpermit.
Link: http://www.hobokennj.org/news/hoboken-launches-surrender-your-permit-incentive-program-to-encourage-car-free-living/
Get the latest  news:
Email | Text |Website | Facebook | Twitter | RSS
Posted by SmartyJones at Wednesday, October 06, 2010
Package for return of city car permits announced
2010-10-06T11:00:00-04:00
SmartyJones
Hoboken Corner Cars Program|
Comments