MILE SQUARE VIEW EXCLUSIVE SPECIAL FEATURE
With the Hudson County Board of Elections confirming there are more than several hundred vote by mail ballots mailed to fourth ward residents, the integrity of the fourth ward special election on November 2nd is officially at stake. On Friday the Occhipinti for Council campaign made charges of voter intimidation against the Lenz for Council campaign and included a letter to the State Attorney General pointedly complaining of "bounties" by "blogs" for the names of vote by mail voters.

The Lenz for Council campaign's response was to welcome a visit by the State AG and promptly list a number of real, actual electoral fraud activities in their own letter state authorities should be on the lookout for in the November 2nd special election.

In an outcome where the winner is anticipated to obtain in the neighborhood of a thousand votes, a head start for one side or the other in the vicinity of 250-300 votes may prove to be an insurmountable burden. MSV can confirm there are close to 350 absentee/vote by mail applications outstanding in the fourth ward based on data from the Hudson County Board of Elections, much of it coming from the 4-4 where "street money" is known to be distributed in amounts of $35, $50 and $75 or more for a confirmed vote by mail (paper) ballot and turning it over to "messengers," - no mailing required. Such voters by mail can then be fraudulently designated as "campaign workers" in what Tim Occhipinti appears to call "common cause." Occhipinti has named the good government group "Common Cause" as a blanket defense of vote by mail. But this isn't what Common Cause had in mind.


In an interview with Occhipinti campaign supporter Perry Belfiore several weeks back, the subject of vote by mail ballots arose. Belfiore delineated the processes for various types of vote by mail applications and indicated a lack of clarity how many such ballots would enter into the November election at that time, stating, "We don't quite know what the universe is." When asked who is "we" he replied, "Not me."

On Friday, the Occhipinti for Council Campaign charged the Lenz campaign and "blogger surrogates" with placing "bounties" on residents "for names of those who vote by mail." The charge is an obvious reference to Operation Bounty supported by Hoboken citizens for fraud free elections here on MSV and the Hoboken Journal and noted Friday in a Hudson Reporter story. The charge is easily vanquished - anyone can obtain a list of names of vote by mail applicants from the Hudson County Board of Election, it's public information.

It's not clear who in the Occhipinti for Council campaign authored this easily disproved fabrication, but MSV has evidence it was passed along the campaign chain of approval via Paul Lichstein, an Occhipinti campaign worker and strong backer of convicted and jailed ex-mayor Peter Cammarano.

At Wednesday night's debate, the systematic purchase of fourth ward votes was questioned and Councilman Mike Lenz decried the practice, inviting Occhipinti not to have campaign workers vote absentee, re: vote by mail. He directly asked Tim Occhipinti to join him in not doing so in a sidebar to his earlier Clean Campaign Pledge request. Occhipinti intially distanced himself from illicit voting practices saying on Hoboken Patch last July, "This will be a clean campaign from anything that I can personally control."

Instead of meeting his own stated standard, Occhipinti now can't bring himself to say he will not employ the nefarious practice of paid vote by mail "campaign workers." "If we need to have election day workers, to make sure we get out and pull people to the polls, absolutely we're going to do it." Implicit in Occhipinti's statement in his response to the original question stating fourth ward Hoboken Housing Authority residents "count on" street money payments is they'll get it. Occhipinti's refusal to answer the question about paying for votes in the HHA was both glaring and telling. Worse, he sounds almost exactly like Frank Raia who eerily preceded his words with his own in a PolitickerNJ's story, "If it means we have to pull people out, if they have to vote by mail, if we have to drag them to the polls, whatever."

Ironically, Occhipinti began his answer by pointing the finger at Councilman Lenz saying he had street money listed on his 2001 ELEC report when he ran for city council. Here's Tim Occhipinti's in the video responding to the question, "Would both candidates agree to use only unpaid workers on election day as opposed to paying between $35 to $50 a vote? Many people in the Public Housing units depend on this and vote accordingly."

Occhipinti who has loudly proclaimed his integrity and independence throughout his campaign, doesn't say where the money would come from for such election day "workers" and his recent ELEC report shows he's not even paid rent for the first month of his corner campaign office on Monroe St.

Three Zoning Board appointments are slated to follow after the fourth ward council election. The City Council will have the determining role in the philosophical direction of development in Hoboken in those selections. In the debate, Tim Occhipinti stated he was for moderate sized development but one supporter who attended a private fundraiser earlier is known to back the approximately 350 unit proposal for 38 Jackson Street. That proposal was yanked off the table by the developer before a final vote. Some speculate the sudden withdrawal has everything to do with the current battle for the fifth swing vote on the City Council.

So how much actual street money will be flying around the fourth ward by the time of the November 2nd special election? That documented bounty, pardon the pun, may not be available until well after the election results are tallied. Even then not all monies routed directly through "campaign workers" would necessarily be traceable.

For the Old Guard Machine operating in the playground in the back of the fourth ward, candidates may come and go but the plantation game stays the same. None dare call the practice of descending on the 4-4 at election time buying votes for a few quick bucks racist. Tim Occhipinti's campaign has tossed aside its earlier pronouncements and instead gone after MSV, the Hoboken Journal and Hoboken residents who back the law defending the integrity of local elections.

The Occhipinti campaign now designates anyone questioning electoral fraud practices as racist and fighting for fair elections, the suppression of minorities. Can cynicism cut any deeper? There's no further depth left in that well with weeks still to go in the election.

With Tim Occhipinti morphing this fast, there's no telling by November 3rd what kind of City Councilman he'll become should he win the special election. By all indications, should he be declared the victor and hold in the ballpark of several hundred vote by mail/absentee ballots, don't expect him to declare himself shocked. Expect him and some of his cynical backers to embrace them and declare victory. Will his family be proud of his renowned "integrity" then?

Talking Ed Note: Those in Hoboken's professional/reform/good government class who want to impact this race need to know that there's big stakes again in a real election in Hoboken and crunch time is here. Any half-hearted effort will not see the sentiments of the reform base in say the 4-2 put a wooden stake in the Old Guard Machine's vote buying heart in the 4-4. For that to happen, voters in the 4-2 will need to bring one or two friends in the neighborhood to the polls on November 2nd.

A Tim Occhipinti win would also resurrect the Hudson County ghost of Maurice Fitzgibbons who is dying to find more paydays than mere subsidized housing in Church Towers along with a hand on the wheel of power. Call it Maslow's ascending hierarchy of needs Hoboken style.

Video clip of Tim Occhipinti at the Jubilee Center debate, courtesy of the Hoboken Journal.

Congressional Candidate Henrietta Dwyer - 'Albio what are you afraid of a little debate?'

Henrietta Dwyer for the US Congress announces:
This last week I directed my volunteer staff to reach out to the Sires campaign to schedule a debate, so that the voters of the 13th Congressional District could hear both of our positions on the issues facing us in this important election.  Regrettably, Mr. Sires indicated that he has a full schedule.  A schedule so full, even though congress is in recess, that there is not even one hour available for a debate. My opponent is too busy to discuss his positions on the issues before the people he pretends to want to represent.  This practice of dodging and evading his constituents was on full display during the recent health care debate when he refused to hold even one town hall meeting to explain his position on the legislation.  We are used to the Congressman holding the views of his constituents as an afterthought so we were not surprised when we he declined our invitation.  On the other hand, with the record Washington has produced this last term, perhaps he’s just hiding.
On the jobs front, Hudson County has some of the highest unemployment in the region at 12%. Congress has played no small part in creating this state of affairs. It breaks my heart when I speak to families who have lost their jobs. We need more jobs here and more jobs now. Record joblessness will remain with us as long as Congress remains hostile to small businesses and the jobs they create.  My opponent and his friends in Congress irresponsibly left Washington for fall recess last week without passing or even proposing a budget for the first time in history while they also scheduled a tax increase for January.  Is it any wonder businesses are reluctant to invest in new workers in an environment like this? Does my opponent even care?
On the health care front, Congress has increased mandates on some companies, while exempting others, creating further uncertainty for the business community. The legislation passed this last term will make access to medicine scarcer and more expensive. It has reduced Medicare reimbursements to doctors, who may now elect to drop out.  It also defunds Medicare while adding 20 million new enrollees to Medicaid. I know our system was not perfect before, but what Congress passed this year is not an improvement for seniors or families. If elected I promise to support real health care reform, not health care rationing.  Just as important, I promise to listen and speak to the constituents of this district on this important issue, as my opponent has refused to do.
This campaign is about the real issues facing everyone this year, and I’m ready to tackle them while others hide.   I’m not a career politician. I owe nothing to the entrenched special interests in Washington. While others now work for them, I promise I’ll work for you. If elected, my pledge to you is that I will work hard, work smart and work honorably to represent you in Congress. 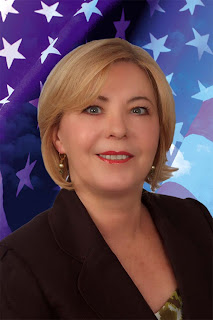 Email ThisBlogThis!Share to TwitterShare to FacebookShare to Pinterest
The Republicans of Hoboken announce: