Tonight the City Council once again has a long agenda and whenever there's a meeting leading into an election, there's sure to be plenty of flotsam and jetsam strewn about.  In addition to the the Hoboken Journal, word comes that Perry Klaussen of Hate411 will be broadcasting the meeting.  That can only mean one thing: Perry wishes to reward his little minion and give him a platform to spew out the biggest lies that will be repeated by same in ghostwritten fashion shortly thereafter. Now what possibly could have led to Klausfurher handing this consolation prize to his little minion?  Well MSV exposed yet another lame operation when the dimunitive Hoboken411 minion was seen in the first row last Wednesday practically mouthing the lines of his new underling, word for word like a stage mom.

MSV broke the story of Tim Occhipinti's version of Broadway acting where all his lines are prepared and written for him word for word.  Will Occhipinti have some lines prepared for him tonight or will the little angry man keep all the flostam and jetsam for himself?

Photo: Tim shows how high his stage mom comes up next to him.

Tune in to the Hoboken Journal for all the zaniness  and glass spitting tonight: 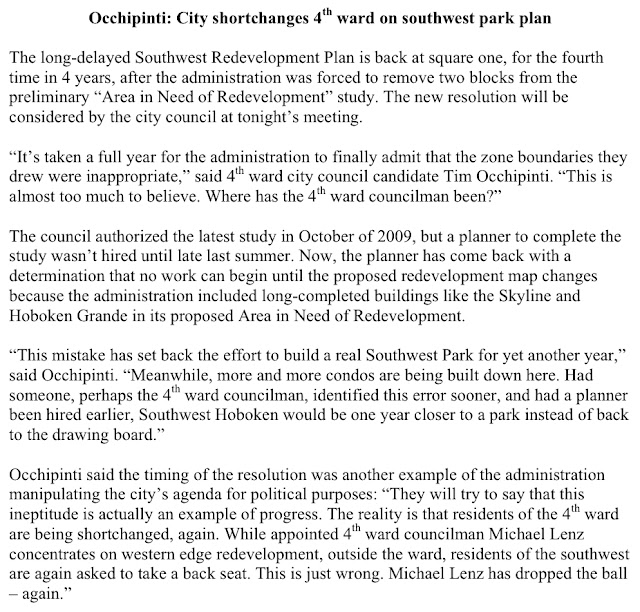 Talking Ed Note:  MSV is no longer getting press releases from Occhipinti for Council.  It actually began on Friday with their release and letter to the Attorney General complaining about a "bounty" for names of vote by mail applicants.  Looks like the same over at the Hoboken Journal as well.  MSV derided that release noting that's public information.  The attempt to derail Operation Bounty has failed.  The bounty has been doubled.

An inquiry asking for this press release was rejected by Occhipinti Communications Spokesman David Cruz.  He said it was his decision and Da Horsey was unfair and cowardly.

As a result, MSV stated policy of publishing releases from Occhipinti without editorial comment is no longer in effect.  It appears the hate filled voice known for its appearance at City Council meetings and ghostwriting at Hoboken411 is once again setting hellfire to the wind and looking for new attack angles to make some hay in the closing days of the election.  Hoboken411 will be doing further coordination with the Occhipinti campaign, of this there should be no doubt.

Parks are a legitimate issue in Hoboken.  But there's no quick solutions and as Councilman Mike Lenz stated, work on Patterson Plank Road is required before a real best solution in the southwest can take shape.  We're not looking to quote the Councilman here, we're just noting the common sense in his remark.

It should be noted that the most isolated biased voices in town over at Hate411 are deemed appropriate to Occhipinti for Council to send its press releases.  Censorship to that campaign appears to be no obstacle either as they are embracing it on multiple levels.  Everyone knows what Hate411 is about and that there's no free speech there.  Choosing that vehicle is akin to resorting to the censorship tactics of totalitarians.

If David Cruz wishes to articulate how MSV acted cowardly, we'll be happy to listen.  He declined to explain his accusation when asked earlier today.

Grafix Avenger met David Cruz after the Jubilee Center debate.  Her impressions were not positive.  What would one say when a man more than twice a woman's size sends a message by crushing a woman's hand on greeting while laughing, "I crushed Grafix Avenger's hand."

Media inquired about our run in with David Cruz at the same event.  We're honoring an agreement with a senior source on Tim Occhipinti's campaign not to discuss the matter and awaiting a response from that party.  Word has been out that the Occhipinti spokesman isn't making many friends on his own campaign either.

As for the content of this release, it's just the typical Hoboken411 hair splitting.  Hoboken has and will continue to address a slate of issues and problems.  It's a long list but don't expect change to address everything overnight at once.  Besides, does anyone believe Tim Occhipinti wrote even a comma of this?

Sidebar: This post is dedicated to a fine police officer serving Hoboken.  Running into him recently in the neighborhood, a quick chat about things overall didn't show he was a reader.  Later he revealed he is an avid MSV observer and morale is way up now on the police department with the plan announced by City Hall.  Expectations remain the final seven retirements due December 2nd will follow and there won't be any police layoffs.

MSV would like to wish him and all the fine people serving Hoboken on the police force the best.  And thank you for your service to our town.

You wanted "the juice" buddy - this one is for you.
Posted by SmartyJones at Wednesday, October 20, 2010
Occhipinti charges park for Southwest shortchanged
2010-10-20T12:51:00-04:00
SmartyJones
Candidate Tim Occhipinti|Occhipinti for Council|
Comments

Yesterday Union City Mayor Brian Stack reached out to touch Hoboken.  He came down the big ole hill from Union City and said he wants to make friends with some of Hoboken's residents in the Hoboken Housing Authority.  He didn't tell anyone at City Hall he was coming.  Normal etiquette would suggest one mayor holding a public event in their town would do so.

Can you name a few reasons why a dual job holding elected official would want to visit Hoboken's HHA community two weeks before an election?

State Senator Brian Stack is a powerhouse in New Jersey.  He has Union City under his wing and also holds a powerful seat in the state's senior legislative body.

Tim Carroll our favorite Hoboken reporter not just covering Hoboken sized up the situation and hits the right chords.  Actually he plugged into a big Marshall amp and cranked out some really big power chords.

In his story, Carroll notes the State Senator hasn't been in Hoboken since 2007 and his re-election campaign won't be held until next year.

Talking Ed note:  Da Horsey received notices from residents State Senator Stack would be parachuting into town.  He apparently didn't want that word out but it was certainly the buzz yesterday.

In 2007, there was a war waging in Hudson County.  Brian Stack was taking on the Hudson County Democratic Organization (HCDO) in hand to hand combat.  That war carried into Hoboken with Stack financing then Council candidate Dawn Zimmer's opponent, Councilman Chris Campos to the tune of six figures.  Yes that would be $100,00 of the mean green.

Mayor Zimmer received somewhere in the neighborhood of $6,000 from the HCDO.  When Dawn Zimmer defeated Councilman Chris Campos, Stack saw his investment go down the tubes.  But he's back and some might say his parachuted appearance into Hoboken's always popular at election time corner in the fourth ward was just a coincidence.

Back when Tim Occhipinti truly ran as an independent for City Council in 2009, he watched as the race around him motored ahead without him when the results came in.  He then found the appeal of Peter Cammarano to be too strong and backed him in the runoff for mayor.

After the election, Occhipinti grew closer to Cammarano and joined his team acting as official notetaker at City Council meetings.  (Since a mayor should be watching city council meetings himself, it's unclear why Cammarano would need Tim to do so but I digress.)

Here in the video above is Tim Occhipinti's first appearance speaking to Hoboken.  He spoke on behalf of Cammarano's centralized powers on the Hoboken Zoning Board.  Leave Peter alone, Tim said.  Well something like that.

Actually Occhipinti says a few things here.  But based on the debate at the Jubilee Center, one thing we can surmise is Occhipinti is far more comfortable saying the words of others.  That's no doubt the case here as well.

The question is who does he speak for now and who will he speak for should he be elected?  It's a legitimate concern to put it mildly.

Talking Ed Note:  MSV has been assured by a senior level member of the Occhipinti for Council campaign an opportunity for Q&A with Occhipinti will be available.  For the record, we asked one question after the debate at the Jubilee Center and that didn't work out too well after Occhipinti agreed to answer and the question was posed.  It was an impromptu question, open and fair.

We'd like to have a few questions answered and then also ask the same of Councilman Lenz.
Posted by SmartyJones at Wednesday, October 20, 2010
Tim Occhipinti runs an errand
2010-10-20T08:21:00-04:00
SmartyJones
Occhipinti for Council|Peter Cammarano and Hoboken Zoning Board|Tim Occhipinti|
Comments