The Republicans of Hoboken hosted a wine tasting event at Amanda's Restaurant Tuesday night and both the wine and the bipartisan group packed the rear room for a very well attended and enjoyable event.
The wines selected for the evening were a fine mix of white and reds to go with the good spirits, and company. Each bottle was numbered and everyone was given ample opportunity to sample and rate according to their personal taste.
At the end of the evening the revelations of professional scoring were revealed. The list assembled turned out to be a mixture all rated with a 90 score and prices from $15 to $45.
Diana Davis hosted the affair with a wide group of Hobokenites from all political circles in attendance.
Photo top: Diana Davis (r) with Mayor Dawn Zimmer and presumptive 2nd ward candidate Tom Greaney. Email ThisBlogThis!Share to TwitterShare to FacebookShare to Pinterest
From the office of Hoboken Democratic Chairman Ravi Bhalla:

Dear Friends,
Have you ever wondered exactly what your local Congressman and County Sherriff do for Hoboken?  On election day next week, you will have an opportunity to cast your ballot for the candidate of your choice for both of these important offices.
To facilitate an informed decision, I urge you to attend a meet-and-greet in Hoboken tomorrow night featuring candidates Congressman Albio Sires for U.S. Congress, and Undersheriff Frank X. Schillari for Hudson County Sheriff.  This is an informational event open to all Hoboken residents irrespective of party affiliation.
This event is the first time Congressman Sires and Undersheriff Schillari will be in Hoboken to meet with residents and answer your questions.  It is a rare opportunity for residents to meet the candidates, learn their positions on issues, and find out how their offices directly impact our quality of life in Hoboken.
Additionally, you may be wondering how next week's national mid-term elections, with control over the U.S. Congress at stake, will effect Hoboken.  Tomorrow night presents a great opportunity to learn directly from Congressman Sires about the impact of next week's national elections on Hoboken.
Here are the details:
What: Meet & Greet with Congressman Albio Sires & Undersheriff Frank Schillari
When: Tomorrow, October 28th, 6 pm to 7 pm
Where: Room 84, 84 Washington Street, Hoboken
Host: Hoboken Democratic Party
I hope to see you tomorrow night!
Sincerely,
Ravi S. Bhalla
Chairman,
Hoboken Democratic Party
Posted by SmartyJones at Wednesday, October 27, 2010
2010-10-27T22:08:00-04:00
SmartyJones
Albio Sires|Ravi Bhalla|Undersheriff Frank Schillari|
Comments 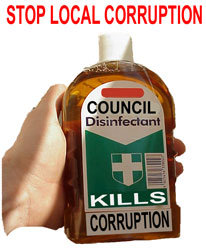 Fourth ward council candidate Tim Occhipinti spoke last night about his lack of knowledge on the massive operation churning out paper ballots in the HHA.  Today his just released ELEC report shows the early payouts have been already made - for election day work not even here!

Here's Tim Occhipinti's initial list of 80 'campaign workers' who have already been paid, I mean voted via vote by mail.  The list is downloadable.

The election for the fourth ward seat next week is officially next Tuesday but the money is already flowing in the HHA.  The report appearing today on the ELEC site shows some interesting information contradicting all Tim Occhipinti's earlier protests about street money.


MSV has taken an initial look at the report and notes several interesting aspects. There's already over dozens* "campaign workers" appearing in the usual area of the Hoboken Housing Authority - all with that familiar signature payment of $40.

MSV can also confirm the latest (and maybe final) figures of vote by mail from the Hudson County Board of Elections.  The fourth ward is now up to 559 vote by mail ballots!!!


How much do you wanna bet most of these people have voted absentee/vote by mail?

Welcome to Street Money Timmy Time!
Talking Ed Note: MSV has seen this coming all along and documented it every step of the way.  As we suspected all along, this story isn't over.  In fact, it's only heating up.
Will the other local media catch up?  Don't expect to see this on Hoboken411.  Okay, stop laughing.  The little angry minion doesn't like when you laugh at his "news" conspiracies.
More to come.  Promise.


And as reader Redrider requested, the Occhipinti ELEC doc for cross referencing paid 'voters' with 'campaign workers.'  Start on that lists on page 13.
Occhipinti ELEC 10-27-10

* The lists is now up to 80. This story is breaking hard.


UPDATE: 2:00 MSV can now confirm that every single person on Tim Occhipinti's ELEC report showing as a 'campaign worker' of $40 payments has also voted in paper ballots - all vote by mail!

Last night, fourth ward candidate Tim Occhipinti arrived late as a surprise guest to the event hosted by the Republicans of Hoboken.  The wine tasting event held at Amanda's was a jammed packed bi-partisan affair.  As always, Tim was polite and came over to say hello and shake hands.  Later we reconnected in a brief discussion where an interview was raised.  Tim suggested another time might be suitable.  He was again invited to do so as his campaign manager Jamie Cryan had reneged on a promise to set one up for last week.
MSV conveyed it's anti-democratic in Hoboken for a candidate running for elected office to refuse to answer even one question.  That's what occurred after the Jubilee Center debate where he accepted an invitation to answer a couple of questions, but then walked away without doing so.  It was one question off the cuff and framed this way: "The candidates aren't responsible for the questions tonight.  But you say you are an independent candidate.  What issues were not discussed tonight that people have not heard from you that reflect your independence?"
Tim paused for a few seconds, and then tried to defer the question to a staffer.  "Tim you're the candidate, I'm talking to you," came the response to his suggestion.  He then again paused and started walking away while asked, "Tim you aren't going to answer even one question?"
Enter Occhipinti spokesman David Cruz, whereupon a quick introduction and his offer to help was met with a request for a time to ask questions.  Cruz turned to walk away and said, "We only accept questions from credentialed journalists."  When asked, "David if I show you a credential will you get me five minutes to ask a couple of questions?" That was ignored along with the follow up, "David do we have an agreement?"
Back to Amanda's, Occhipinti said he had already answered questions at the debate and elsewhere and would limit questions to "accredited members of the press."  MSV offered to provide one and he again referred to a staffer suggesting follow up that route.  His offer was declined based on the earlier outcome at the Jubilee Center.
At that point, with clearly no future opportunity to discuss issues forthcoming, Tim was asked what he thought about the widely disparte 500 plus (vote by mail) absentee ballots mostly out of the Housing Authority in the 4-4. Occhipinti responded, "I don't even know about it.  It's vote by mail."  MSV posed the follow up, "What do you thing about it?" and Tim responded, "I think everyone has the right to vote.. as long as they vote."


Talking Ed Note: In the impromtu chat with Tim Occhipinti, he said he also said he doesn't read "your stuff."  He said the website is "very pro" but didn't complete the thought.  No issue there.  This website supports good government, accountability and the reform movement in Hoboken.  The thousands of readers who come week after week know exactly where MSV stands and they come back to read about Hoboken's governance.

MSV told Tim, "I'm hard and don't like the direction of where things are going.  I don't like the idea that people don't answer questions."  More on that to come.

In case it's not clear, this website serves Hoboken.  Questions are asked on behalf of the people to get answers they deserve, often unasked and sadly not investigated by the resident media.

To illustrate the state of our press locally, here's three simple words: vote by mail.


Next:  I'm not with Tim.
Posted by SmartyJones at Wednesday, October 27, 2010
Occhipinti on massive VBM in HHA "I don't even know about it"
2010-10-27T06:00:00-04:00
SmartyJones
Candidate Tim Occhipinti|Hoboken 4th Ward special election|Occhipinti for Council|
Comments