Two individuals are named in the affidavits: Matt Calichio, who was mentioned earlier as possibly having problematic ties to the Occhipinti campaign on vote by mail transactions in the Hudson Reporter debate.

The other is Frank Raia, the perennial candidate in Hoboken elections, most recently for Mayor last November as a suspect in another signed affidavit.

In an interview with MSV by phone, Frank Raia categorically denied he was involved in any way in vote by mail fraud.  "I don't know what the hell this is but they are playing with the wrong guy.  I can sue them all for defamation of character and sue them out of the town."

In a ripping tirade, Raia complained, "You haven't seen me knock on one door.  They are sore losers.  They should blame it (the election) on themselves."

Raia continued in a blistering rebuke of the charge in the complaint saying he knew nothing about it, "Whatever I've done, I've done for Dawn Zimmer, whatever they are accusing me of," he stated.  He then added ominiously, "I will sue them all and drain all their money until they're homeless.  Go after someone else."

Raia ended by saying, "There will be repercussions if they play with me.  I put them (Mayor Zimmer and Mike Lenz) there. Without me, she wouldn't be in that chair (mayor's office.)  They will pay.  I will wipe them out.  Go and pick on somebody else.  They're desperate because they know they're going to lose."
Posted by SmartyJones at Thursday, October 28, 2010
Matt Calicchio and Frank Raia named in vote buying scheme; Raia rejects charge
2010-10-28T16:56:00-04:00
SmartyJones
Candidate Tim Occhipinti|Frank Raia|Hoboken VBM fraud|Matt Calicchio|Occhipinti for Council|
Comments

The Mike Lenz for Council campaign has filed a complaint and order to show cause today in New Jersey Superior Court as a result of what we believe to be strong evidence that the Occhipinti campaign has embarked on an organized program of paying voters $40 or more to cast Vote by Mail ballots.  Mr. Occhipinti’s own ELEC filings reveal that out of 79 individuals identified as  campaign workers, 78 cast vote by mail ballots contemporaneously with receiving the payment.    In addition, several individuals have provided affidavits confirming that they were paid in exchange for casting Vote by Mail ballots.
Election Fraud is a serious matter, and the Mike Lenz campaign is confident that the Board of Elections, the New Jersey Attorney General and the Superior Court will review all of the evidence and make the decisions necessary to ensure that Hoboken’s 4th Ward residents receive the honest and fair election to which they are entitled.
Lenz Charges Occhipinti Fraud
Posted by SmartyJones at Thursday, October 28, 2010
The bomb drops on Tim Occhipinti - Lenz campaign files complaint for massive VBM fraud
2010-10-28T15:51:00-04:00
SmartyJones
Lenz for council|Occhipinti for Council|Tim Occhinpinti|
Comments

No one can quite explain it.  By some unknown unseen power, Occhipinti's 'campaign workers' have almost all to a person found their way to cashing in for $40 each while each is equally fascinated with the paper voting option - vote by mail.   (Designated "captains" get $300 for rounding up those elusive vote by paper mailers, pardon, those pesky 'workers.')


Dozens and dozens of Tim's Truth believers are scouring the fourth ward looking for a festivus poll.  Is that what they meant by poll? 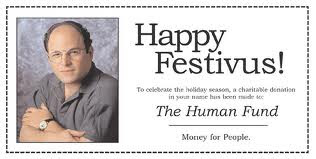 David Cruz the wordsmith Tim Occhipinti has on the payroll to deal with such nefarious problems trotted out some large doses of less than properly distilled spirits to PolitickerNJ yesterday in an attempt to explain The Anomaly saying:


The "elitists" like to claim, "They're poor people, they must be getting paid to vote."


"They're employment with us is not contingent on vote-by-mail.  It's not a requirement of them."


Meanwhile, Lenz campaign manager Sam Briggs extended another invitation to the Occhipinti campaign, although this one doesn't appear to share the mutual enthusiasm of earlier.

"Mr. Occhipinti has previously requested Attorney General oversight as well, and we call on him to join with us in reiterating that request," Briggs said.  "The Lenz campaign will cooperate fully with any investigation and hopes the Occhipinti campaign will do so as well."

David Cruz also said many 'campaign workers' have signed affidavits saying they are working in various ways, wearing t-shirts and "talking up the candidate."  Does that sound like a job or a no-show vote it in job?

You don't hear the Occhipinti campaign welcoming the Attorney General into Hoboken anymore now do you?

That's your biggest indicator right there.


Talking Ed Note: MSV received the latest Occhipinti for Council press release yesterday but declines to publish it.  It was not provided to MSV from David Cruz nor have any since the release several weeks back describing "bounties" being placed on applicants of vote by mail.  That obvious fabrication stated in a letter to State Attorney General Paula Dow may land up coming back to haunt them.

The latest Occhipinti release is an attack on a local builder who put up a four story home on lower Park. Approvals were made unanimously at the Hoboken Zoning Board for its erection including a variance. It was opposed by a Hoboken resident who lives at the top of a five story unit two doors down.  The builder is supporting Mayor Zimmer and most recently Mike Lenz for council.  The attack in the Occhipinti release mirrors a hatchet job on this Hoboken resident by one of Tim Occhipinti's campaign people, Lane Bajardi.

MSV will not air a regurgitated politically motivated hit job here from Hoboken411 and its little, angry minion.  It looks like a hail mary attempt to change the subject.

But the subject is only coming into focus.  More to come.

The Soprano State - 'NJ needs to say enough is enough'

Anomaly - any occurrence or object that is strange, unusual, or unique. It can also mean a discrepancy or deviation from anestablished rule, trend, or pattern.
In the following contexts, "anomaly" may refer to:
*

With yesterday's big election story on what we'll call going forward "The Anomaly," as Occhipinti spokesman David Cruz called the uncanny support of dozens upon dozens of election 'workers' all voting via vote by mail for his candidate, it's time to look deeper.

As the movie The Soprano State says, it changes when NJ (and Hoboken) residents say "enough is enough."

Although Peter Cammarano is gone, his friends and their election practices most certainly are not forgotten.  All his old friends have thought the old formula would just go by and no one would really notice.  Word spread quickly here with readers coming in from coast to coast, from Orlando to San Diego.

* Notice you don't see the fourth district of the fourth ward qualifying as an 'anomaly.'
This story is now ready to take the next phase.  Have no doubt, it will.


Related: Timothy Carroll formerly of the Hudson Reporter now with PolitickerNJ has followed up on the story broken wide open here on MSV.  His latest story, "Inside Hoboken's absentee boom," is a marvel with obfuscation galore from Occhipinti spokesman David Cruz.