Reader Legal Honeybee emailed some interesting documents on the former convicted mayor to Peter Cammarano previous - Anthony Russo who is believed paying off to the City of Hoboken his "restitution" for crimes against the town while mayor.

There's a little problem with the restitution.  Anthony Russo claimed to gamble away all the proceeds of his ill gotten gains and has paid next to nothing on the ballpark $332,000 owed as part of his conviction.  His barely there payments have lowered it to only about $325,000.

In the last City Council meeting, ex-mayor Anthony Russo's name came up and the subject of his restitution to Hoboken as well.  His cousin, Councilwoman Terry Castellano tried to give the appearance all is on the up and up, the convict in La Familia is doing right by Hoboken and paying for his crimes.  Well if you consider an ante of just over $7,000 on a bill of over $332,000 paying.

Here's her sleight of hand in action.  It's pure Castellano at her finest:

Notice how Councilwoman Castellano tries to direct the discussion in both the beginning and then in the end, her specialty.  Councilman Mike Russo tries to divurge the discussion for a walk on the dark side, but fails to throw the true facts off track.  The former convicted mayor Anthony Russo hasn't in fact paid 10% of the restitution total to Hoboken.  In fact, he's hardly paid much of it at all.

Unlike in Europe, the existing laws in the US allow people to quickly transfer over assets for a nominal figure before the government comes in and seizes it for crimes while in office.  Property sales are usually within the family and go for the bargain basement price of $1.  The Russo family maintains a lovely home in Belmar while they mostly live in subsidized housing in Church Towers.  Councilman Mike Russo has fractional "ownership" in the Belmar home as well.  (He also had a condo on Monroe Street while he was living in subsidized housing on the taxpayer's dime.  He's since sold it.)

If the government had employed a RICO action, it could have seized and sold the Russo Belmar property but now it's too late.  The spoils from that visible gain are still used by the Russo family while they maintain a voting base of their "supporters" cultivated on the backs of other Hoboken taxpayers and at the expense of civil servants who really deserve an opportunity for subsidized housing.

The reason that's not the case? Church Towers has no annual income verification tied to rent charged beyond a small $100 surcharge so there's no incentive to leave no matter additional money residents earn.  Turnover is kept at a minimum, and Hoboken's deserving young police, fire and other civil servants are left out in the cold.   The de facto control of the Russo clan is preserved maintain a voting base within the Church Towers domain.  The Russo's are believed to control the whole process and the wait list.

Church Towers also had its pilot renewed in March of last year with no adjustments made whatsoever to this situation.  You can thank Councilwoman Beth Mason for that.  She traded support from the Russo clan in the spring of 2009 in a run for mayor.  They allowed her to trade away her reputation on good government while ensuring they got something in their pocket up front.  She sold out decent government for power and lost everything in the deal, especially her creditability with reform minded voters.

MSV planned on releasing the story Monday morning but on Friday, our colleague at the Hoboken Journal did a fine comprehensive piece beating us to the punch.  Seems our reader, she of legal honey nectar had an itch to get out that sting.

It's a fine job and worth a read if you haven't seen it yet:

Update: The Hoboken Advocate posted some beguiling data showing yet another contradiction surrounding the purchase of the Russo's Belmar home.

A transcript excerpt from Anthony Ruso's sentencing states the property was bought with proceeds from Michelle Russo's job as a real estate agent flipping real estate to newcomers but the mortgage shows both Anthony and Michelle Russo on it.

Wonder how much the proceeds from the sale of the Russo's Belmar property would go to the $300,000 plus debt to Hoboken? 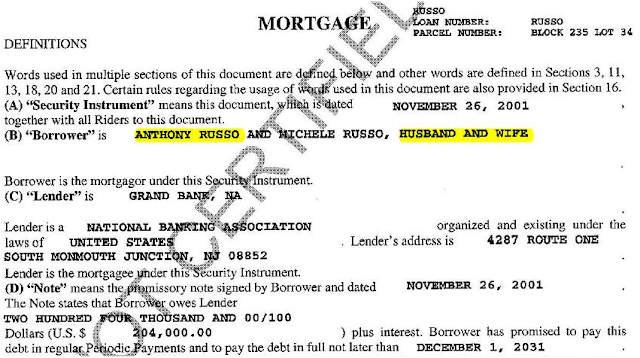 There's a new website in Hoboken bringing a new flavor to digging and uncovering waste and corruption in town.  Which means you won't be hearing about it in other than negative vague attacks by politicians, the old guard and their supporters who view light on such matters as simply unfathomable.

Eric Kurta, the Wile E. Coyote launched the new website, the Hoboken Advocate to provide a clearinghouse of information often missed in the today focused local media but so valuable it shouldn't be missed.

In this case, his is the first (and only) website to post the very late but finally submitted ELEC report from one former mayor: Peter Cammarano.

One of the funniest things in the report is how they had to put in Solomon Dwek, the government's star witness in Operation Bid Rig as a contributor.  The money had to be accounted for and it's actually in the report, but there's a little mention to it belying the less than enthusiastic obligation to do so.

Kurta views the new website as a place to revisit and revamp research he's done earlier while adding new features from "a notebook" filled with items the old guard doesn't want you to see revealing inefficiencies, incompetence, and yes corruption in the Mile Square City.

Best of all the new website will provide open-source information.  Eric Kurta who has given Hoboken a great deal back over the years is providing the site free to anyone to use as they like - inviting all to excerpt, copy, and lift as they see fit.  (This should really aid the boys of hate at Hoboken411 as they really lack imagination in their blatant lies of late.  Kurta stopped submitting his original research there although it pops up now and then with his name removed.)

Every town should be so lucky to have an Eric Kurta who is willing to dig and find the things that go bump in the night or fly through a City Council meeting in a flash without much debate or discussion causing the homestead much harm.   What the old guard calls the "good old days," and hopes to see reborn now with Tim Occhipinti heading to the council table.

Expect more vocal complaints about "the internets."  Well they should just blame that Wiley Coyote.  They don't have the guts to because they fear the light being turned on them.  No doubt he will.

Take a look at the new site:

ASSEMBLY PANELS TO CONTINUE FIGHT FOR WOMEN’S HEALTH CARE, REVISE MEDICAL MARIJUANA USE RULES & REFORM AFFORDABLE HOUSING LAWS
Bills to Confront HealthCare Costs, Help Families Pay for College, Create Jobs & Economic Growth & Protect Consumers Also on Tap
(TRENTON) – Assembly committees on Monday will continue the fight to fund women’s health care, revise the Christie administration’s medical marijuana use rules, reform New Jersey’s affordable housing laws and promote job creation.
It will also consider landmark legislation to for the first time confront out-of-network health insurance costs.
Also on the agenda are bills to help working families struggling with college tuition payments, protect consumers from Gov. Chris Christie’s new law allowing the state to escheat unused telephone cards and help residents combat unfair consumer contracts.
The hearings will be streamed live at: http://www.njleg.state.nj.us/media/live_audio.asp.
The Assembly Appropriations Committee will meet at 2 p.m. to consider legislation (A-3273-3274) to appropriate $5 million in untapped funds from another account to restore funding cut by Republicans for women’s health programs in New Jersey, while also requiring the state to apply for federal matching dollars for Medicaid-eligible health care consumers.
“This is an issue of paramount importance, one that cannot be treated with casual indifference by those looking to pander to the governor,” said Assemblywoman Linda Stender (D-Middlesex/ Somerset/Union), who is among the bill sponsors. “We have put two new viable solutions on the table. Anyone unwilling to consider them must accept responsibility for denying women access to crucial medical care and prevention screenings.”
Assemblywomen Valerie Vainieri Huttle (D-Bergen), Linda Greenstein (D-Middlesex/Mercer), Celeste Riley (D-Cumberland/Gloucester/Salem) and Pam Lampitt (D-Camden are also sponsoring the legislation.
The Assembly Regulatory Oversight and Gaming Committee will meet at 2 p.m. to consider a bill (ACR-151) sponsored by Assemblyman Reed Gusciora (D-Mercer) to declare the Christie administration’s rules for medical marijuana usage as inconsistent with legislative intent.
The bill would give the state health and senior services commissioner 30 days to revise the proposed rules.
"The name of the law includes the word compassion," Gusciora said. "I do not believe that these regulations exemplify that word.”
The Assembly Housing and Local Government Committee will meet at noon to consider legislation to abolish the Council on Affordable Housing and revise affordable housing laws.
“This is a reasonable compromise that ensures towns will have a diverse housing stock that takes into account the needs of not only low and moderate income residents, but working class residents too,” said the bill sponsor, Assembly Speaker Pro Tempore Jerry Green (D-Middlesex/Somerset/Union).
The Assembly Commerce and Economic Development Committee will meet at 2 p.m. to consider legislation (A-3143) sponsored by Assembly Democrats Lou Greenwald (D-Camden), Annette Quijano (D-Union) and Lampitt to create jobs and economic development by expanding the Urban Transit Hub Tax Credit Act and the New Jersey Economic Stimulus Act of 2009.
It will also consider a bill (A-3389) sponsored by Assembly Speaker Sheila Y. Oliver (D-Essex/Passaic) and Assemblyman Albert Coutinho (D-Essex) to revise the financial assistance available under the Business Retention and Relocation Assistance Grant Program.
The Assembly Financial Institutions and Insurance Committee will meet at 10 a.m. to consider legislation (A-3378) sponsored by Assembly Democrats Gary S. Schaer and L. Grace Spencer (D-Essex) to bring transparency, disclosure and quality assessments to the health care marketplace and reduce costs for consumers and businesses
“This legislation seeks to give New Jerseyans the information necessary to make informed and financially prudent decisions regarding their own medical care,” said Schaer (D-Passaic/Bergen/Essex).
The Assembly Higher Education Committee will meet at 10 a.m. to hear testimony on barriers that prevent more women from entering into science, technology, engineering and math fields.
It will also consider several bills to help working families and students pay tuition and other costs associated with attending college.
The Assembly Consumers Affairs Committee will meet at 10 a.m. to consider three-bills (A-3433-3434-3435) sponsored by Assemblymen Paul Moriarty (D-Gloucester/Camden), Patrick J. Diegnan Jr. and Peter J. Barnes III (both D-Middlesex) to help consumers combat a system that has given unscrupulous businesses the advantage in contract disputes.
The Appropriations panel will also consider a bill (A-3159) sponsored by Moriarty, Diegnan, Vainieri Huttle to exempt telephone calls from the newly implemented Republican escheatment law.
The bill exempts gift cards or gift certificates usable solely for telephone services from the escheatment processes imposed by the budget signed into law by Gov. Christie in June.
Complete Assembly committee agendas can  be found at:
http://www.njleg.state.nj.us/legislativepub/legcal.asp
Posted by SmartyJones at Sunday, November 07, 2010
Assembly Democrats present multiple plans with live stream hearings option
2010-11-07T08:05:00-05:00
SmartyJones
NJ Assembly Democrats|
Comments