Hoboken networking event for a good cause

Hoboken has a lot going on almost all times of the year, but once again autumn has sprung upon us and here's a great local event for people to get together and network while helping others.

This Thursday night at Room 84 on Washington.  Wintry babes not included. 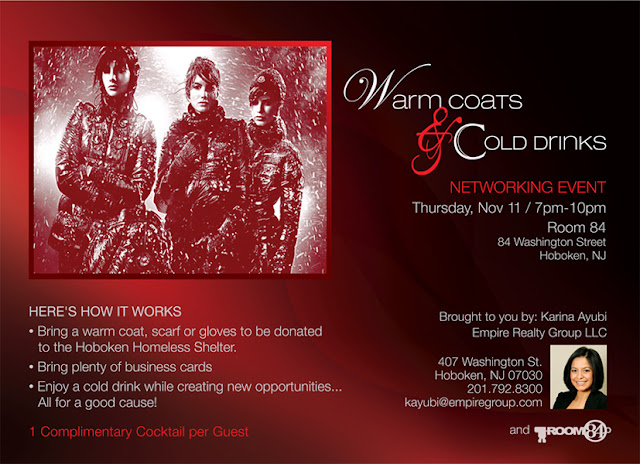 Hoboken transportion solutions to be featured in NYC

TRANSPORTATION & PEDESTRIAN SAFETY SOLUTIONS TO BE FEATURED AT “STOP SPEEDING ” IN NYC
’s innovative solutions to improve pedestrian safety and reduce congestion will be featured at a "Stop Speeding Summit" this month. The event, hosted by Transportation Alternatives at the NYU Wagner Graduate School of Public Service, is a groundbreaking summit to address the pervasive effect speeding has on myriad aspects of our lives, from the health of children precluded from outdoor play to the billions of dollars that crashes cost society in medical, emergency services, rehabilitation, property damage and travel delay costs every year.
Presenting on behalf of  will be Ian Sacs, Director of the Transportation and Parking Department. He will be showcasing the various programs that have made Hoboken so well known around the country for prioritizing pedestrian safety and walkability, such as Corner Cars, the recently implemented "Twenty is Plenty" awareness campaign to encourage drivers to slow down, and “Hoboken Daylighting” – the installation of inexpensive poles at intersections to improve visibility between vehicles and pedestrians.
The Zimmer Administration's transportation and parking solutions have been recently featured in a wide range of print media and professional journals including the New York Times, University of California Berkeley Access Journal, Urban Transportation Monitor, and most recently, on the front cover of theNew Jersey League of Municipalities Magazine (November 2010).
Residents may attend by registering for the event for free at the link provided below.
Event Information
Partners & Sponsors
American Traffic Solutions
The  for Transportation Policy and Management
The Wagner Health Network
The Urban Planning Student Association
The Wagner Transportation Association
Start: November 19, 2010 - 8:30am
End: November 19, 2010 - 5:00pm
Location: The  of Public Service
http://www.transalt.org/events/calendar/4850
Link: http://www.hobokennj.org/news/hoboken-transportation-pedestrian-safety-solutions-to-be-featured-at-stop-speeding-summit-in-nyc/
Get the latest  news:
Email | Text |Website | Facebook | Twitter | RSS
Posted by SmartyJones at Tuesday, November 09, 2010
Hoboken transportion solutions to be featured in NYC
2010-11-09T17:01:00-05:00
SmartyJones
Hoboken Transportation solution highlighted in NYC|
Comments

Occhipinti lawyer: any campaign fraud "not sanctioned by the campaign"

The Hudson County Board of Elections certified the fourth ward special election yesterday, but it failed to connect the dots on the clear lines of evidence presented showing a likely organized effort for voter fraud.

The Lenz for Council campaign is continuing to press its case with 200 challenges presenting a host of problems in the vote, especially in the vote by mail operation.

The story highlights key differences in the perspectives of each campaign.  Notable from Councilman Ravi Bhall'a perspective is the 78 of 79 'campaign workers' named on Tim Occhipinti's ELEC report being paid just days after their vote by mail ballots were submitted.

Councilman Bhalla decried the refusal of the Hudson County Board of Elections to see the obvious voter fraud patterns evidenced,  "They went ballot by ballot instead of looking at the total."

Michael Goldberg defends much of the rejection by Hudson County while later distancing the Occhipinti for Council campaign from wrongdoing claiming it "definitely wasn't sanctioned by the campaign," and is quoted as then saying one bad apple "doesn't spoil the bunch."

An investigation announcement on the massive incongruity of the candidates' vote by mail ballots is anticipated by Michael Harper, Hudson County Superintendent of Elections today.  It should address the County's position where Occhipinti received 390 votes to Lenz's 34 in paper ballots - over a ten times differential.  The candidates were separated by only 50 votes on the machines.

Talking Ed Note: This story was sourced with information from Claire Moses' story on Hoboken Patch.  Her comprehensive story is available at the link:

At the previous City Council meeting, Councilwoman Terry Castellano put out into the Hoboken ether a description of ex-mayor Anthony Russo's ways as doing "something wrong."

The clip as seen here November 7th from the previous City Council meeting is probably only a small taste of what is to come from the "new era" with Tim Occhipinti seated as fourth ward Councilman.

Although MSV can't confirm it as there would be no response from Councilwoman Beth Mason on her aspirations to put the words 'City Council President' on her mass mailers for the spring Council elections, some key observers expect her to attempt to eject the current City Council President Carol Marsh.

One of the first orders of business apparently after Councilman Tim Occhipinti is again sworn in for the public showing before the next City Council meeting, will be to act as the rubber stamp and be the fifth vote to cause the uproar of bad taste.

Bad taste has rarely been a concern for Councilwoman Beth Mason.  Last year on the same day of now convicted mayor Cammarano's resignation, she released a press release as Dawn Zimmer was sworn in to replace him.  She had earlier indicated she was not available for the ceremony as she was on vacation.  Her press release told Hobokenites Zimmer shouldn't get too comfortable in the mayor's seat.

Now only if Councilwoman Mason can see Mayor Zimmer get a parking ticket or run over a orange cone on Madison Street, she can demand her resignation and be installed as mayor.

Just imagine the fun and games the City Council will be with Beth Mason running the show and her angry little Hoboken411 minion controlling the microphone.  What orchestrated fun they will bring to the town (less the texting during meetings.)

Such is the toxic nature of Hoboken's political culture.  This town is going to find out the results of what the Hoboken Housing Authority 'voting' residents have unleashed on us all, especially its taxpayers.

Here's what we have been missing out on as detailed from the Hoboken Advocate's excerpts from the Assistant US Federal Attorney:

"The unfortunate reality was that when Mr. Russo took office, he swept through the City of Hoboken like an unsuspecting storm, damaging the City of Hoboken and its citizens by depriving them of his honest services...Any good deeds by him during his tenure as mayor, pale in comparison to the corrupt manner in which he misused his office for personal gain. He simply expected and demanded to be paid in exchange for awarding municipal contracts...."

To fully comprehend the extent of his greed, when one merely needs to reflect that from on or about June 23rd, 1997 through November 30, 2001, the defendant personally took in excess of $317,000 from one city contractor alone."