Sadness on the Hudson 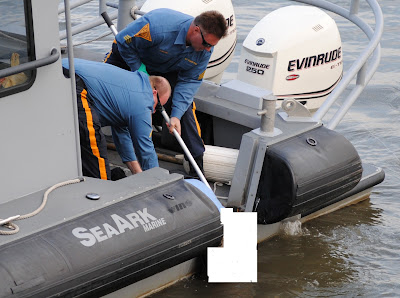 This afternoon in Hoboken a woman approximately 40 years old jumped into the Hudson River in the area of 3rd and 4th Street.  NJ State Police later arrived and were seen removing the body of a woman from the river believed to be the same person.

In respect to both the woman's untimely passing and her family, details have been removed from the photo.
Posted by SmartyJones at Saturday, November 20, 2010
Sadness on the Hudson
2010-11-20T21:01:00-05:00
SmartyJones
Comments

The Machine and Hoboken411

Augie Torres at the Jersey Journal has his typical integrated piece on the county scene and today MSV decided to write a reply to his mish mash of thoughts on Grafix Avenger.  While it appears to Da Horsey he's trying to make a better effort in his insider column, he makes some mistakes, the most grievous and glaring being his failure to link to the controversial graphic and story on GA's site.

Instead, just like that Jewish Democrat PAC site, he links to Hoboken411.  That's pretty much like handing the keys of your house to the crook who has been casing it for a week.

This pattern of linking to a propaganda site run by a cadre of Beth Mason fanatics is disturbing, but coming from a journalist is frankly unforgivable.

It's way past time for the curtain to be pulled back and the light shone on the orchestrated machinations of Beth Mason, Lane Bajardi and Perry Klaussen on Hoboken411.  It's amazing the local media hasn't made a point of highlighting this cabal at all over the time it's been transpiring.  That it fails to raise its voice at the orchestration to suppress dissent and free speech is unpardonable.

That a journalist would follow that roadmap is beyond sad.

(He also couldn't find even a few words to note the County prosecutor sending the fraud problems on to the State Attorney General's Office.  Gee, just like Hoboken/Hate411.)

Here's one small excerpt from his column with my stream of thought reply, including errors:

Zimmer is in a bind because her opponents want to hear her take on the whole thing. The administration wants to put a leash on some of their pro-bloggers, but I doubt they can or should -- they guarantee future fun and chaos in a city full of egos. As for Pincus, all I can say is that when they ask her to resign from the Zoning Board, after things blow over, that the Avenger should refuse, on principle of course. Then watch the JibJabs fly.

Well Augie I will say it seems you are trying to make more of an effort here, so there will be no scathing sarcasm this round but I must note your column failed to connect the dots between Councilwoman Beth Mason's pathologically lying attack poodle Lane Bajardi and his frothing rage attacking Grafix Avenger at Monday's City Hall meeting on the satire from a 1934 movie poster showing not one Nazi insignia and the week's ending events where Tim "personal integrity" Occhipinti's campaign finds a pile of problems on legal voting methods now sitting on the desk of the State Attorney General.

Worth noting Mr. Torres or does election fraud finding its way to the State from the Hudson County Prosecutor via Hoboken not even merit a mere mention?

Unrelated? Why don't you look into it and tell us? First the graphic in question was up almost two weeks before it became part of a a lashing of lies flung wildly at the City Council meeting. In addition Lane Bajardi has been on a jihad against Grafix Avenger for months now going back to the spring. (That video is available at http://hobokenhorse.blogspot.com.)

More disappointment in your assessments here though. First as a writer you show a cardinal failing in linking to Lane Bajardi's ghostwriting efforts on Hoboken411. Now why would a writer point to an attack dog's work as the source instead of the so called offending matter? Could you not find the graphic itself and the actual story written on Grafix Avenger? Really? Is it laziness or do you just not care or in fact wish to advance the propaganda of orchestration by the silent victim Beth Mason?

It's getting more difficult to witness these obvious flaws in how you approach your subject matter and conclude you are making a fair effort, don't care or in fact are supporting she of the ever deep pocketbook expenditures for an ever growing list of consultants, political operatives all linked to her lynching site, Hoboken/Hate411. Does this orchestration to snuff speech and savage smaller voices not give you pause?

That a small website by an individual who writes satire and about her family being targeted by the Hoboken/Hate411 minion over months says a lot about Councilwoman Beth Mason. The link illustrated by the Jersey Journal to the Jewish 'organization' that turns out to be political action committee making a "condemnation" on behalf of Beth Mason yet another. Turns out a board member there has more than PAC interests on his mind and he too found it necessary not to link to the source of his ire but yet again Hoboken411. When not doing fundraising for Beth Mason, is this all just sheer coincidence?

Last, I'm not clear why you even suggest the administration wants to put a leash on some of their "pro-bloggers." I started my website because of that crook Peter Cammarano, not Dawn Zimmer. I've had several opportunities to interview the mayor as well as other officials including Judy Tripodi the fiscal state monitor who agreed to do so because of a desire to see the truth told. What does that tell you about the state of journalism in our midst?

The former fiscal state monitor for Hoboken later sent me an email out of the blue lamenting how she was being depicted in a horrible graphic on Hoboken411. She's hardly the first one nor the last. Anyone who gets in the way of Beth Mason, elected official, appointed official or citizen who speaks out is liable to be savaged in City Council meetings or on her designated hate site by the unemployed but ever busy Lane Bajardi. Character assassination, vitriol and the politics of personal destruction are the trademark here.

Although it's somewhat heartening to hear you say the Administration shouldn't try to control some of their "pro-bloggers," what you don't really understand is people are not acting on any direction and personally I have never seen it. The mayor does not comment on my work when I've seen her at events and seems to have a healthy attitude about the distinctions between her role and citizen voices. It's an intelligent path. Notwithstanding the constant carping by Beth Mason's paid political operatives, there isn't any organized support for the administration.

While there is always reference and attacks made to websites in Hoboken as "pro-Zimmer," you never hear about Hoboken411's allegiance to Beth Mason where money has certainly exchanged hands more than once. While sites generally interested in supporting the good government agenda of the mayor are acting as individual voices as citizens on a part time basis, Hoboken411 has savaged many Hoboken people while never ever saying anything critical of Beth Mason.

It's also somewhat tiring to hear the attacks repeated without any substance most recently on the 4th ward special election. While there's general agreement between pro-reform websites such as The Hoboken Journal, Grafix Avenger and Mile Square View, it's not even in the ballpark of what's going on between Beth Mason, her 'friend' Lane Bajardi and Hoboken411.

You want to do a story - do that story. Are you brave enough to tackle the obvious?
What you don't admit is in Hoboken, there's a healthy voice of the people at the grassroots exerting itself. On Mile Square View, free speech is advocated, supported and censorship is not tolerated. Hoboken deserves places for people of all positions and views to be aired.

That's not even permitted on Hoboken411. Of all the savage hit pieces done with no sourcing, no quotes from both sides, (especially its victims) it's pretty distasteful to see you link to that as "the source" of the offending graphic. Oddly, that's exactly what that Jewish PAC did on behalf of Beth Mason.

Why don't you take a scratch at that and let us know what you come up with? In the meantime, link to an actual source when you "point" to a controversy. Failing to do so, make you subject to suspicion like Beth Mason's fundraiser/supporter Larry Stempler. For more on that, take a look at Grafix Avenger. http://grafixavenger.blogspot.com