Board of Ed announces times to meet final Superintendent candidate

The Hoboken Board of Education invites all to come and meet the final candidate for the position of Superintendent of Schools.

Please come to Hoboken High School on Tuesday, November 23rd between 1:30 PM and 2:30 PM, and again from 4:30 PM to 6:30 PM. You will have an opportunity to meet the candidate and learn more about him. The Board has also advertised a Special Meeting on November 23rd at 7 PM to consider the appointment of a new Superintendent, contingent on Hudson County Executive Superintendent approval. This meeting will be held in the Board offices.

The search process began in June with the hiring of a specialized recruiting firm, who then reached out to the community, teachers and staff for their input during the search.

In October, the consultant presented approximately 50 potential applicants to the Board. After several weeks of interviews and a group visit, one finalist remains.

The Hoboken Board of Education is currently in contract negotiations and is awaiting approval from the Hudson County Executive Superintendent. For this reason, confidential information regarding the candidate cannot be shared at this time.

What can be shared is the thanks of the Board to everyone who took the time and worked so hard together on this important task.

Hoboken is an amazing City with a wonderful school district; it deserves nothing short of a stellar Superintendent, with proven experience, passion for public education and a positive vision of the future for all district students! Come join us on November 23rd at 1:30 PM or 4:30 PM
Posted by SmartyJones at Sunday, November 21, 2010
Board of Ed announces times to meet final Superintendent candidate
2010-11-21T18:23:00-05:00
SmartyJones
Hoboken Board of Education|
Comments

Atlantic City: The League of Municipalities recognizes good governance practices and recently highlighted the Hoboken Corner Cars program as a positive innovation but the good news for the town doesn't end there.  Hoboken's Zoning Board attorney placed the town on top again with a prestigious award.

The award for ethics in government - the Michael A. Pane Award was presented to Dennis M. Galvin, Esq by both Mrs. Pane and her son, Michael Pane.  The plaque reads, "Conferred upon the Attorney who has exemplified the highest standards of ethics and whose work has significantly enhanced the integrity of local government."


Mr. Galvin, addressed the State’s local government lawyers, saying: “No one is perfect. We are all put to the test. The difference is how we respond to our test by the choices we make. We must seek out the better nature in ourselves and in those we represent. Good and bad choices are contagious. Let’s make ethical behavior viral.”

Mr. Galvin is expected to submit an article on the subject for the League of Municipalities publication.

Anti Semitism rears its head on Pier A? 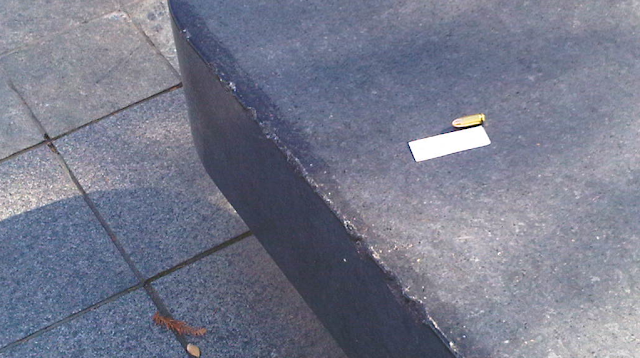 This just came in from a reader and it's not easy to know what to make of it.  But someone is clearly looking to stir up trouble.  The police are looking into the matter now over at Pier A Park.  The bullet appears to be real.
Posted by SmartyJones at Sunday, November 21, 2010
Anti Semitism rears its head on Pier A?
2010-11-21T13:16:00-05:00
SmartyJones
Comments


This week provided some illumination in grafix, performance art and the art of the sleaze even overfilling an angry drunk's glass filled with the foul taste of anti-Semitism thrown in the mix.  One thing bartenders know in Hoboken is not to give another shot to an angry drunk.

That's exactly what occurred Monday night when Beth Mason's favorite angry performance artist decided to use similarity to a movie poster as a prop to make charges of fascism and anti Semitism legitimate tools for grabbing a balance of power seat on the local zoning board.

In the time reporting on the Hoboken scene, there's nothing to touch the foul pit of ambition and power so distasteful as what transpired in the City Council and beyond last week.

What began as a possible distraction to Old Guard expectations of law enforcement entering Hoboken on the criminal matter of electoral fraud, turned into a wretched stench in short order when a small Jewish political action committee made a condemnation of a graphic of questionable taste, one that could have people digesting its merits pro or con in reasonable disagreement - including the Jewish community in Hoboken.

But could anyone have anticipated Monday night we'd hear Councilman Mike Russo launch an assault on a Hoboken woman who is both Jewish and who has seen family perish in the Holocaust charged with anti Semitism just so his clan can get their hands on another zoning board seat?

As for the shameless lies from Lane Bajardi and reckless charges of fascism, the only reply worth making is has he taken a look in the mirror lately?  There's no cancerous poison in Hoboken more a threat to freedom for its residents than the political operative machinations emanating out of that heap of bile in the City Council, Hoboken411 and in scheming calls and text to upper Hudson St.

MSV is well aware there are many readers here of Jewish heritage.  Da Horsey would make no claim to speak on their behalf but has heard from some personally and in the comments section over time.  It's hard to imagine anyone is happy with what's transpired in Hoboken this past week on an area of such great sensitivity as anti Semitism.  One can expect there is a great deal of discussion among family and friends over coffee in the kitchen and in many family rooms, the second ward included.

Beth Mason and her trail of circling dollars with her fundraiser/supporter Larry Stempler is going to make a great many people feel queasy in the stomach as the financial relationship continues to come to light.  The web is untangling and the sordid truth verifies the absolute worst.

Although Beth Mason probably thinks it's all fine, many reasonable people from all areas of Hoboken are already reeling from the stench.

Mike Novak once the counselor to the king, (ex-mayor Cammarano thought he was anyway) believed to be interested in a Zoning Board seat at a minimum and maybe the 1st ward Council seat piled on the Nazi charge express with wild attacks on Twitter.  He set his sights on the mayor while earlier making a call to Grafix Avenger saying he was getting "complaints," but refused to say from who.

That a former Zoning Board member would enter into the mix as part of this foul soup sufficiently tells you all you need to know.  All the players on the stage entered for some fun and games.

But this time Beth Mason and her paid assassins have gone too far.  The blowback from the people of Hoboken isn't gong to be pretty.  Nor should it.

Talking Ed Note: MSV attended most of the City Council meeting last Monday and couldn't help but notice the Council of No's restraint through the course of the evening.  Councilman Mike Russo even failed to exhibit his typical rudeness to Director Ian Sacs on the wildly successful Corner Cars program.

We asked a regular attendee their thoughts but concluded differently.  The Old Guard forces were expecting something and it wasn't good news.  Earlier this week a person heavily involved in the Tim Occhipinti campaign came over to complain about the photos taken of them in the Council chambers saying, "I'm having a bad day."

So they all knew trouble was coming from the Hudson County Board of Election kicking the matter to the country prosecutor for criminal examination.  What they didn't see coming was the matter also being forwarded to State Attorney General Paula Dow's office.

Attorney General Paula Dow previously worked with Gov. Christie in the Federal Attorney's office.  She's a Democrat who also headed the prosecutor's office in Essex County, the most challenging and overburdened in the entire state.

To her review and office's intervention in the matter of Hoboken's fourth ward election we can only say godspeed and please come to Hoboken for the spring time.