The Hudson Reporter weighs in on Tim Occhipinti's 'election'

Ray Smith at the Hudson Reporter wrote his story adding insights on the expenditures in the fourth ward special election last month.  It highlights the glaring problems still under review in the NJ Attorney General's office.

Among the points the story highlights:


Former Councilman Mike Lenz comments into the exploitation and victimization of the Hoboken Housing Authority residents saying, "the workers are not the villains; they're the victims.... the people who made the payments, the people who financed the payments, and the officials who have let it go on for too long."

Would such paymasters be aptly described as racist?

Talking Ed Note: There's only one reasonable conclusion to draw from the Hudson Reporter story.  Either Tim Occhipinti has the laziest campaign workers in the history of elections or they were paid $40 each to to vote for him.

Almost a full third of Occhipinti's vote came by paper ballots, obscenely beyond NJ's 5% average but that percentage would even be higher if numerous other VBM weren't thrown out.

Of the 575 'campaign workers' the majority voted by mail.  About a hundred votes were thrown out on cursory review by the Hudson County Board of Elections - almost all for Occhipinti meaning that his 399 by mail vote was clearly intended to be in the range of his 'campaign workers.'

Such a coincidence exceeds the 78 of 79 paid vote by mail 'campaign worker' voters revealed first here on MSV before the election.  Occhipinti spokesman David Cruz called that mathematical improbability 'an anomaly.'  You can call Occhipinti's entire vote by mail operation the anomaly ad infinitum.

Councilman Mike Russo in a PolitickerNJ story said he hoped Tim Occhipinti would generate 600 vote by mail votes.  MSV heard accounts a VBM campaign was being conducted out of the Russo Civic Association with one resident recounting a request to go there and submit a paper ballot vote.

Although MSV can't determine what the outcome of the fourth ward election would have been if the clear massive fraud was removed, the problems revealing themselves are more than sufficient to see law enforcement enter the fray.

What will the NJ Attorney General's office determine from this?  It's very quiet there and they have not said a word.

The black cloud over the City Council carries into 2011 and every 5-4 Council of No majority vote with it.

* Source: the Wiley Coyote at the Hoboken Advocate 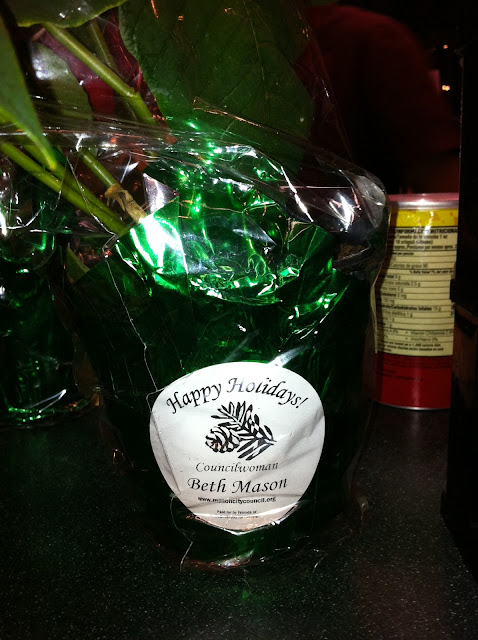 In these tough economic times, shelf space for any business is more critical than ever.  Beth Mason brought a bunch of these plants pictured above promoting herself to the uptown Sparrow Wine location telling them to give them to its customers.

Why would a politician even ask a private business to host and hand out their 'gifts' to residents?  Is that the equivalent to having city workers 'donate' to your campaign or what the ever shrinking cadre of Beth Mason cultists called "voter intimidation" when Operation Bounty announced a reward for reporting voter fraud leading to a conviction?

The best one can say about such thinking here is it's certainly inappropriate for a council member to go to a local business and have them use their retail space to promote themselves having her plants all over their shop and telling them to hand them out to its customers.

Would those Mason cult of personality adherents call this: "business intimidation?"

That's some chutzpah and it's not even the turn of the year leading into the 2011 election.


Talking Ed Note: The Hoboken Journal has a part two to this story with similar plants being issued by Councilman Mike Russo.

Did Beth Mason buy Sparrow Wine?  If so, then this is certainly appropriate, but if not, it's beyond inappropriate.  One could say it's transparently unethical.
Posted by SmartyJones at Sunday, December 19, 2010
Business intimidation? Beth Mason says to local wine shop - hand my 'gifts' out
2010-12-19T13:16:00-05:00
SmartyJones
Beth Mason holiday 'gifts'|Sparrow Wine|
Comments