Mayor Zimmer sent out a tweet on today's landmark signing of arbitration reform into law:

Claire Moses at Hoboken Patch has also weighed in with a story on the post election brouhaha of the ad infinitum anomalies in Tim Occhipinti's 4th ward campaign. 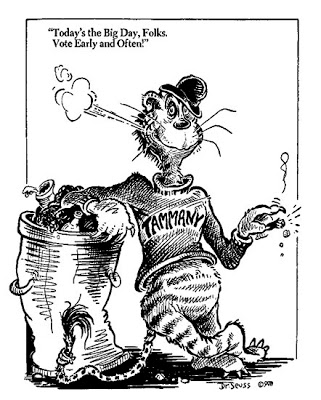 For those yet to see it, there's a number of quotes from parties central to Occhipinti's dilemma: David Cruz, spokesman who first described the 78 of 79 'campaign workers' on the pre-election campaign report all voting by mail and being paid within the timeframe of their vote as 'the Anomaly,' defends the broader problems where upwards of 80% of the 500 plus unseen army voted by mail.

Also, we have quotes from Matt Calicchio, Sandra Smith of the HHA and on the other side, comments from Councilman Ravi Bhalla and Stevens history Professor Jonathan Wharton.

It may be late entering into the holidays, but the conclusion is exactly what MSV has been saying all along: the black cloud over Tim Occhipinti (and his handlers) carries over into 2011. The story concludes with the New Jersey Attorney General's spokesman declining comment on any "pending investigation,' as the matter is not closed.

Talking Ed Note: One glaring person (and fact) missing from the article is Beth Mason who gave Occhipinti $13,400 much of it right before the election through her personal council committee, Friends of Beth Mason. Based on the Hudson Reporter story confirming $22,000 alone was paid out on election day, it's clear those monies were used to pay those 'campaign workers.'

Notice how Beth Mason is unavailable for comment when the heat turns up. It's a pattern and one that will be interesting as this story develops and from the looks of the new sheriff in town (AG Paula Dow), it's developing.

Councilman Mike Russo who was seen at a midnight meeting at Tim Occhipinti's campaign office when election investigators made rounds in the HHA earlier in the day is also oddly not heard from in this story.

The two people who stood to benefit most with the installation of a Tim Occhipinti are now as quiet as church mice.