Noting the anomalies in the invisible army of Occhipinti 'campaign workers,' Blue Jersey flatly calls for an investigation.  The matter currently rests with the NJ Attorney General's office after the Hudson County prosecutor forwarded the case when a folder of criminal referrals showed up from the Hudson County Board of Elections after its own initial investigation uncovered multiple problems.

The punchline though comes with the website's plotting a graphic speaking volumes on how Tim Occhipinti's campaign stands against other Hudson County elections last month.  Blue Jersey writes:

Take a gander at this graphic, then tell me you don't see red flags. You're looking at a chart of the vote-by-mail percentages for the Hudson County general election. Compare Occhipinti's absentee voter percentages with other Hudson races, and with Lenz's race: 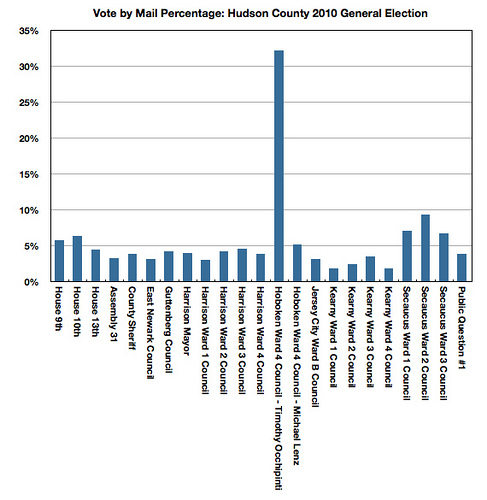 MSV earlier detailed this exact information on Tim Occhipinti's massive output of VBM to the overall percentage of his vote and noted it would be even higher if almost a hundred other paper ballots were not tossed by the County.  In addition, it's been previously noted here the current statewide average falls into the range of 5%.  There's been some clashes with people who insist on tossing red herrings to distract from that fact, some statewide elected officials.


As the attention on the numerous glaring problems in the election are becoming more widely known with stories from the Hudson Reporter and Hoboken Patch, the question remains open where this heads as we turn into 2011.


The graphic is the quickest rebuttal to the voices of denial.  In New Jersey, denial by those involved in racketeering is hardly news.