Residents should call the Hoboken Police Department at 201-420-2100 for ALL emergencies. 911 service is temporarily down and will be restored as soon as possible.

Posted by SmartyJones at Monday, December 27, 2010

CITY OF HOBOKEN WORKING TO CLEAR STREETS; RESIDENTS URGED NOT TO DRIVE

Six plows have been out continuously cleaning Hoboken’s streets since Sunday afternoon. The City has brought in a private contractor to help, and nine plows are currently on the road, with more on the way.

Despite the plowing, drifting snow due to strong winds has re-covered streets and made them treacherous to drive on. A state of emergency remains in effect, and residents are strongly urged to stay home and not drive. Only vehicles with chains or snow tires should be on the roads.

Mayor Dawn Zimmer thanks Hoboken Environmental Services employees, the Hoboken Police Deptment, and the Hoboken Fire Department for their dedicated service during this challenging blizzard. In addition she thanks Hudson County, which has been plowing continuously in Hoboken since Sunday, as well as Stevens Institute and NJ Transit, which are continuing to plow their respective areas as well. 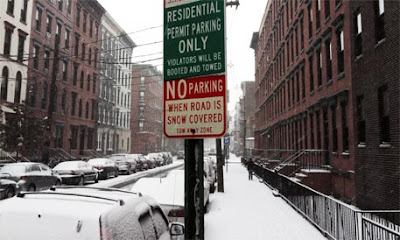 Effective immediately, Hoboken Police will begin towing vehicles parked along all snow emergency routes. Abandoned vehicles anywhere in the City will also be towed. If your car has been towed, please go to the Parking Utility in City Hall for a tow release.
Emergency Snow Routes
Street                          Location
Both Sides
Willow Avenue              to
Third Street                   to
Fourth Street                 to
Fifth Street                    to
Street to
Residents are reminded that dumping or shoveling snow into restricted fire hydrant areas or into City streets is a violation of the law and subject to a fine. Keeping these areas clear is vital for the safety of the general public.
Streets remain treacherous and only cars with chains or snow tires should be on the roads. Vehicles that get stuck make it difficult for plows and emergency vehicles to move through.
The Hoboken Parking Utility is extending the courtesy to  residents with Residential parking permits to keep their vehicles in Garages B () and D () at the reduced Resident rate of $5.00 through 8pm on Monday. Regular rates apply at other times.
Link: http://www.hobokennj.org/news/police-to-begin-towing-cars-along-emergency-snow-routes/
Get the latest  news:
Email | Text |Website | Facebook | Twitter | RSS
Posted by SmartyJones at Monday, December 27, 2010
Here come the big rigs - towing of emergency snow routes begins
2010-12-27T10:54:00-05:00
SmartyJones
Comments

Reduced rate garage parking has been extended. Residents parked in Garages B & D may remain there until 8pm for the same $5 rate.
Posted by SmartyJones at Monday, December 27, 2010
Reduced rate residential parking extended to 8:00 PM
2010-12-27T10:33:00-05:00
SmartyJones
Comments