(Meeting is posted here in its entirety. Very revealing!)

The real snow comes on Tuesday night but tonight Hoboken prepares to be snowed when Beth Mason and Mike Russo team up on their talking points to snow the rest of the city on why they needlessly grandstanded shutting down a temporary budget proposal with one Mikie Squared wrote on the back of a napkin over dinner.

No joke, Mike Russo actually brought a handwritten budget into the City Council, plopped it on to the table and said here's the one we should vote on.  (It doesn't add up but he along with Beth Mason and the Council of No Four plus Nino Giacchi insisted everyone do a big circle jerk, drop everything and figure out how to make it work.)

Since it's election season (again) and they truly believe Hoboken people are a) ignorant b) stupid c) love lying public officials d) all of the above - there's no reason to believe this won't be another episode of the Twilight Zone.

Tune in at 8:00 if you can't be there to see all the fun and politrickin in person, live chat is available here.

Hey, did anyone ever tell Mike Russo what century it is? Even in the late 20th century they had this thing called a computer and something called a spreadsheet where all kinds of financial data was worked on to do things like budgets.

Update post mortem: The Beth Mason-Mike Russo faction was able to push through a temporary budget amendment that will force an emergency budget (unnecessarily) at a later date but this was another bad night for their faction. The public beginning with Scott Siegel took apart their transparent attempt to defend the grandstanding on the budget at the last meeting and shredded it entirely. The public portion at the beginning is worth a close look out of the gate. The whole ruse of forcing these unnecessary wasteful adjustments instead of following the NJ State guidelines on a temporary budget amendment based on the prior year awaiting an audited/finalized one is brought into the light.

The Council passed a temporary underfunded budget of 17.5% and the majority led by Mike Russo refused to logically address why it is doing so. Questions asking for what benefit or savings it brings to the city were ignored and pointedly so. The intentions are clear and obvious - it's politrickin what they desire even if it puts the city workers payroll at risk.

Beth Mason is caught redhanded attempting to manipulate the speakers list in order to favor her minion, Lane Bajardi of Mason411. Yours truly refused to go along and it was all exposed at the 1:24 mark.  The City Clerk was called upon to show the short list of public speakers revealing the little subterfuge between Beth Mason and Lane Bajardi.

Councilman Nino Giacchi was so rattled by the public's inquiries on the matter of why the State guidelines on a temporary 90 day budget is being ignored, he obfuscated trying to hold to an apparent agreed party of five line but more importantly he claimed a "memo" was sent to pile on in the questions and comments posed by the public. This was very unusual for Councilman Giacchi to make wild allegations against the public instead of addressing his failure in joining with "the majority."

Since this junta running things (re: the Mason-Russo faction) operate in this fashion it's hard for them to believe the public grassroots will rise up and state their mind. There's significant tells in the bitterness against the public through the course of the short meeting as it's exposing the intellectual dishonesty on display and the Beth Mason-Lane Bajardi-Hoboken411 operation as never before.

Yes, these are reform minded individuals but it's clearly messing with their minds. Was curious who would attend the special meeting but was pleased to see accountability brought to bear on the City Council.  They ignored reason pointed out repeatedly to them but howled in pain throughout (especially with cancerous bile pouring out from their little minion).

The public should take note and make a point to speak more. There's a handful of people who refuse to respect democratic values in a public government meeting. They are losing their grip even while holding a five vote majority and unable to muster anything but a few catcalls. The public should make its voice heard stronger, louder and more often at the front of the City Council leading into the May elections.

Former Councilman Mike Lenz encapsulated perfectly all the budget issues as well as the political machinations of the Beth Mason-Lane Bajardi-Hoboken411 political operations in one fell swoop at the 1:36 mark.

PREPARES FOR SNOW STORM
The National Weather Service has issued a Winter Storm Watch from Tuesday evening through Wednesday afternoon. Possible snow accumulations of 6 to 12 inches are predicted.
The City of  is taking a variety of measures to alert residents of the upcoming storm and ensure public safety. A Reverse 911 message will go out to residents, and a robocall will be used to contact resident parking permit holders. Information will be distributed via the City website, the Nixle system, on Channel 78, with electronic variable message signs placed at entry points to the City and at the PATH station, and by police officers stationed along snow routes and at the PATH station.
The City is offering suggestions for residents to minimize the impact of the storm:
·        If you do not have to travel, stay home and do not drive. If you must travel, use mass transit. Vehicles that get stranded in the snow will hinder emergency response and cleanup operations.
·        Do not park on emergency snow routes. As soon as streets are snow-covered, cars along these routes may be towed. A state of emergency does not need to be declared for towing to occur. Additionally, the Police Chief has declared the entire length of  as well as  between  and  to be temporary no parking zones due to the snow emergency. A list and map of emergency snow routes is available on the City website: http://www.hobokennj.org/departments/transportation-parking/emergency-snow-routes/. The City has designated  from  to  as well as  for storing removed snow. Residents who believe they have been towed should call Mile Square Towing at (201) 217-3133
·        Consider parking in a municipal garage. Due to the predicted storm, a special rate of $5 per 24 hour period is being offered in Garages B () and D () to residents with a parking permit decal or Temporary parking permit placard beginning at 8pm on Monday, January 10 through 8pm on Thursday, January 13. This rate is applicable while space is available.
·        Residents may contact the  as of 3 pm on Tuesday with questions or areas that need snow plowing by calling 201-239-6643/6644/6647/6648. For emergencies, call 911 or the Hoboken Police Department at 201-420-2100.
·        Monitor the City website, http://www.hobokennj.org or sign up to receive free email or text updates from the City via Nixle by visiting http://local.nixle.com/city-of-hoboken.
·        Download, review, and distribute to neighbors or post in common areas the storm parking information flyer:http://www.hobokennj.org/docs/transportation/StormParkingFlyer.pdf
·        Residents are reminded that it is illegal to shovel snow back onto streets or onto fire hydrants. Property owners or occupants are responsible for clearing sidewalks of snow within 6 hours of the completion of a storm, and residents are urged to assist elderly or disabled neighbors with clearing snow from their properties.
·        Alternate side parking regulations will be suspended during the storm.
·        Residents who wish to extend their stay in the garage and who have a parking permit decal or Temporary parking permit placard are reminded that overnight parking (8pm to 8am) is available at a rate of $5.00. This rate is available in Garages B (), D () and Midtown every day of the year.
Link: http://www.hobokennj.org/news/hoboken-prepares-for-snow-storm/
Get the latest  news:
Email | Text |Website | Facebook | Twitter | RSS
Posted by SmartyJones at Monday, January 10, 2011
It's no blizzard but...
2011-01-10T15:55:00-05:00
SmartyJones
Hoboken Snow Preparation|
Comments 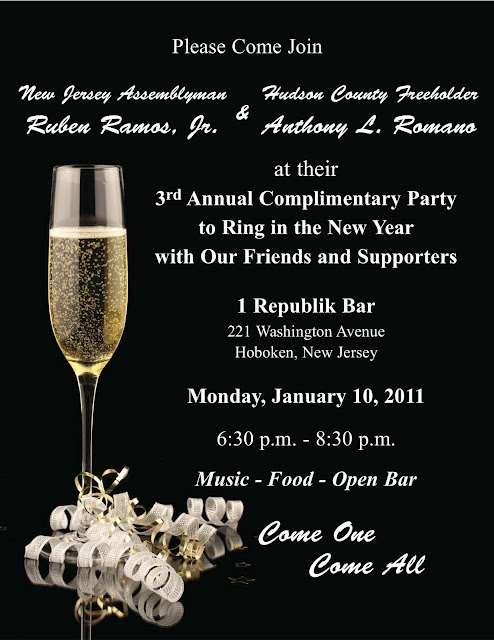 Horse Sense: Mason & Russo - time to clean up your mess

With the takeover of the City Council complete at least until the council elections in May, Beth Mason and Mike Russo have been running their playbook joined at the hip.  Their biggest challenge in the first City Council meeting in 2011 with the overthrow of the sitting Council President was taking on the mayor's temporary budget, typically a straightforward process where a NJ municipality takes three months based on a percentage in the range of 26.5% from the previous budget until a required audit is completed.

That of course was not good enough for Mike Russo and Beth Mason.  They plotted over days obviously leading into the meeting with a plan to undermine a three month temporary budget by half the time claiming it was "to put the administration's feet to the fire."

So where's the fire or better yet, where's the beef?  The whole grandstanding process turned into a descent into the Twilight Zone with Mike Russo springing his budget on to the Council and finance professionals present demanding it be immediately acted upon.  With a working majority, it was a perfect example of a typical staged attack with the purpose of making as much trouble as possible with next to no benefit.  Actually, what benefit did Mike Russo introduce as a reason for subjecting the Council, city professionals and public to this handwritten budget from off the back of his dinner napkin?  He didn't give one.

And where is transparency available to us as Beth Mason said recently on another matter back in only December?  This so called temporary budget amendment was sprung on the public just like her and Russo's midnight "emergency" power grab - with no transparency whatsoever.

Clearly Beth Mason and Mike Russo plan springing politrickin like this on a regular basis right through the May council elections.  It's all part of a clear premeditated "shock and awe," program to make the public think they are actually doing something useful.

Last year, there was plenty of noise from both Beth Mason and Mike Russo on the budget and that's where it ended.  Neither worked to make any significant reductions in the surprisingly useful budget workshops where some real hard work by Directors in the Administration and City Council members produced savings in the range of several hundred thousands of dollars.

Can Beth Mason or Mike Russo make any such claim they played a significant role in those efforts?  Beth Mason actually made a complaint one of the two workshops was not noticed properly and refused to join her colleagues on the dais.  Instead she showed up, complained the meeting was improper and then sat in the sparse audience offering no value whatsoever to the 2nd ward or any Hoboken residents.  (The City Clerk confirmed the meeting was in fact properly noticed.)

Tonight at 8:00, Beth Mason and Mike Russo have to clean up their mess.  If they fail again, city employees can't be paid as the cutoff is Tuesday.  Joined philosophically in siding with city employees over the taxpayer, how ironic does it get?

Of course if any disaster should befall the town since their foolish actions leading to no bills being paid by the city in almost a week, they'll just turn around and blame the Administration.  The concept of shame seems devoid from their character when they enter council chambers.

Put power in the hands of the incompetent where ability is far exceeded by craven ambition and this is the result.

Correction: The state standard for a temporary budget is not in the range of 26.5% as stated but exactly 26.25%.
Posted by SmartyJones at Monday, January 10, 2011
Horse Sense: Mason & Russo - time to clean up your mess
2011-01-10T06:00:00-05:00
SmartyJones
Beth Mason|Hoboken City Council|Mike Russo|Politrickin incompetence|
Comments