It's Official: the Wiley Coyote, Eric Kurta is in for the 1st Ward City Council election! 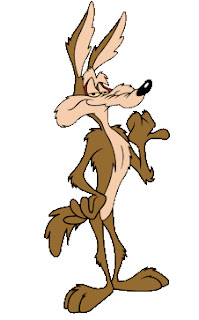 The seat currently held by Terry Castellano, cousin of former convicted felon and ex-mayor Anthony Russo means a key clash of Hoboken's past and future will be contrasted in this May's city wide council elections.

Eric Kurta is a long time advocate of good government policies currently serving on the Hoboken University Medical Center board where a successful bidder to buy the facility and relieve Hoboken taxpayers of a $52 million bond liability was just announced.  He's also Vice President of People for Open Government.  His role was central in passing landmark pay to play legislation in Hoboken when he served as President in the legendary organization.

The video below "Cammarano Condescends," shows a member of POG in a mano-a-mano battle with then Councilman Peter Cammarano with Terry Castellano barking out her desire to get a shot at Eric Kurta.

Rumors of candidates are circulating in other wards but MSV as a matter of policy will not float their names without expressed consent.  There is broad speculation on the 3rd ward with several candidates having given consideration to take on Councilman Mike Russo, but none have moved forward to step up to the plate yet.

Long time political player, Frank Raia is a 3rd ward resident but it's not clear if he is considering such a move this round.  The 3rd ward remains wide open for a candidate to step up to the plate.

Earlier the Hudson Reporter searched similar documents showing 2nd ward resident Tom Greaney filing required ELEC forms in a similar matchup of Old Guard versus reform minded candidates.  That was the first salvo with a matchup where Tom Greaney takes on the monied Beth Mason who ditched reform to form an alliance with the Russo clan.


Talking Ed Note: Eric Kurta is also the editor of the Hoboken Advocate, a website linked here on MSV.  We think he's going to be a bit busy on other things though.
Posted by SmartyJones at Friday, January 14, 2011
It's Official: the Wiley Coyote, Eric Kurta is in for the 1st Ward City Council election!
2011-01-14T21:43:00-05:00
SmartyJones
Beth Mason|Eric Kurta|Hoboken University Hospital|the Wiley Coyote|
Comments

In a letter to the City Council heads, Mayor Zimmer requested Beth Mason and Mike Russo get back to her by the end of the month indicating what should be retained in the City's budget surplus.  Noting it would be their decision as it's determined by the City Council, she asked them to provide specific "input on the matter," on how to handle the surplus so it could be taken into account in preparation of the new budget.

The letter also notes the $10 million cash was set aside for the 2010 budget a figure falling within the range recommended by financial experts and rating agencies.

Last week at the emergency City Council meeting Beth Mason and Tim Occhipinti were asked in the public session to correct their misstatements on stating there was a $20 million surplus.  Beth Mason refused (she's never wrong you know) and now will be charged to submit the surplus amount the city should retain.  She's previously said it should be given back, and stated that exact position again at the emergency City Council meeting Monday.  (It happens to be in the video below.)

As there is no $20 million available based on the most recently available figures, it should be interesting how Beth Mason explains this one.  If nothing else, it will be entertaining.

Talking Ed Note: Well Beth we don't care where you get it.  Give us our $20 million. 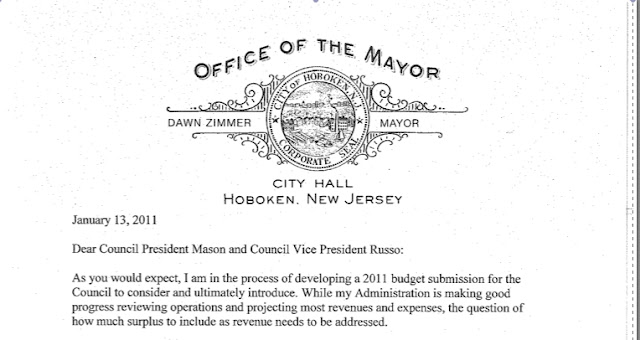 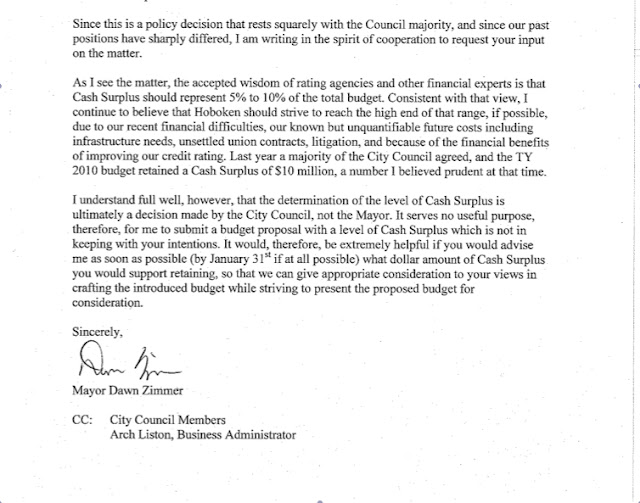 MILE SQUARE VIEW EXCLUSIVE
During the coronation of Beth Mason to Council President, one could easily believe it was all peaches and cream with her family stopping by to witness the event.  But politics in Hoboken is a rough and tumble atmosphere, and the Mile Square City is a valuable property, sitting atop many visions for further grandeur in the political stratosphere of the Soprano State.
Using the City Council chambers to run a political operation is actually not new to Beth Mason.  At various times she's hired a cameraman to come film Council meetings, not for "transparency," - that was Old Beth - but to gather footage for cut and paste political hit jobs with TV and Youtube ads.  MSV was proud to uncover a critical one days leading into the fall 2009 mayoral election here:
http://hobokenhorse.blogspot.com/2009/10/horse-sense-lane-bajardi-youre-sham.html
At the coronation City Council meeting Beth Mason again hired her trusty camera service to come and film the event.  Nothing particularly surprising in that, but further examination showed a quite different intent and transparency had nothing to do with it.
As the meeting got underway, Da Horsey noticed the cameraman was spending an inordinate amount of time filming the audience with the camera pointed in the direction of the front third across the room.  The cameraman was not filming the audience per se, he was continuously filming one section of the audience.  And it then became clear who was his person of interest:
Clocking this for a bit, the cameraman seemed intent on obtaining continuous footage of Mr. Greaney who was doing nothing more than sitting quietly observing the meeting.  After some time passed, the camera swung to the front of the room but then minutes later he returned to the true job moving the camera back to continuously filming where Tom Greaney sat.  This went on for a good long spell.
Having met Mr. Greaney, Da Horsey trotted over to give him a heads up to what was transpiring.  As he was being informed of the political operation underway in City Council chambers, Tom clearly did not know on who's behalf the filming was being done.  He was completely taken by surprise to hear he was being filmed for yet another Beth Mason City Council special feature to come: a cut and paste hit job to be determined later by Beth Mason's re-election campaign.  As this was being relayed, the first speaker completed their remarks and then Beth Mason immediately called out our name to come to the microphone.
The only problem: our name was way down on the lower end of the list but now magically Da Horsey was bumped all the way to the top.  How did that happen?  Mere coincidence?
It was fairly obvious to us Beth Mason saw that her cameraman's handiwork was spotted and his cover of filming the meeting blown. (He was shooting the meeting for the purpose of transparency right?).  Showing her deft political instincts, Beth Mason wielded the power of the City Council chair and quickly bumped Da Horsey all the way to the top of the list in the hope she could stop Tom Greaney from learning he was being surreptitiously filmed for a later cut and past hit job like was done previously to then City Council President Dawn Zimmer in the infamous "Stop Hiding the Budget" sham video.
Coronation or not, Beth Mason wanted that stock footage and by darn she was going to get it even if it meant bumping Da Horsey way up the speaker's list in the hopes her operation wouldn't be blown and communicated to Tom Greaney.
Too late, sorry Beth.  I hate when that happens.
Talking Ed Note: Just in case anyone thinks Beth Mason merely made a casual error on a speakers list with only five people signed up at the emergency City Council meeting Monday, here's another example of Beth Mason's transparency.
If you believe she'll be posting that video, you'll have better chance of seeing hell freeze over.  Beth Mason doesn't even have a complete video of the meeting to make available.  This time we'll bet Beth Mason won't make the claim like she had during last Board of Education election season, this was for transparency.  (Yes in an interview she really told MSV that.)  She pulled the plug on filming meetings there when things didn't look good in her opposition to Kids First, although a family contribution of $5,700 was later shown in an ELEC report to a rival group.
MSV sat on this story although it was obvious what she was doing the same night she took the gavel.  It only took one additional meeting to reconfirm how transparent Beth Mason is in wielding the powers of City Council President.