City: Let's get a planner and ensure good development for the Terminal and Rail yards

CITY RECOMMENDS PLANNER FOR  TERMINAL & RAIL YARDS
At the next Council meeting on February 16, 2011, the City Council will consider a resolution to award a contract to Wallace Roberts & Todd, LLC to conduct the redevelopment plan for Hoboken Terminal & Rail Yards. 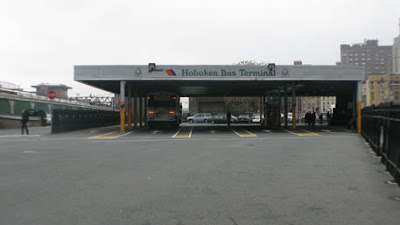 “ needs balanced development that reflects the vision of our community and puts our needs first,” said Mayor . “That is why I have strongly advocated for selecting and paying for a planner ourselves, so there is no doubt about whose interests they represent. I am glad we are making real progress in that direction.”
Following a Request for Qualifications process initiated by Mayor Zimmer and led by Community Development Director Brandy Forbes, the firm was unanimously recommended by a review team composed of the City Council’s Planning, Zoning and Economic Development Subcommittee, the Community Development Director, a member of the Quality of Life Coalition, and a member of the Hoboken Rail Yards Task Force, a community group.
The City Council’s Planning, Zoning and Economic Development Subcommittee agreed to recommend awarding the contract to Wallace Roberts & Todd, LLC to conduct the redevelopment plan for the Phase I scope of work for an amount not to exceed $77,000.00. While the entire NJ Transit redevelopment area is 52 acres in size, the first phase of the project encompasses a 1.8 acre portion along .
Mayor Zimmer continues efforts to negotiate an agreement with NJ Transit to clarify that the City has authority over the redevelopment process for the entire 52-acre project. However, she repeated her previously stated view that in the absence of a signed agreement with NJ Transit ensuring that the City has final authority to approve or disapprove any proposed project for the 52-acre site, she adamantly opposes moving forward in a piecemeal manner.
Click here to view the Request for Qualifications response submitted by Wallace Roberts & Todd.
Link: http://www.hobokennj.org/news/city-recommends-planner-for-hoboken-terminal-rail-yards/
Get the latest  news:
Email | Text |Website | Facebook | Twitter | RSS
Posted by SmartyJones at Monday, February 07, 2011
City: Let's get a planner and ensure good development for the Terminal and Rail yards
2011-02-07T23:02:00-05:00
SmartyJones
Comments

At the last City Council meeting, the Beth Mason - Mike Russo junta suffered through the limited presentation on the election reform package sponsored by Council members Peter Cunningham and Ravi Bhalla.  The package, consisting of an updated pay-to-play ordinance and tightening a loophole to stop wheeling.

Beth Mason who declared herself a champion of pay-to-play reform sits atop the problem, obliterating the spirit if not the law in her family contributions to the Tim Occhipinti campaign in 4th ward election last November.  Where $2,600 is the individual maximum, she routed well over $13,000 and based on the list of contributions to Occho-corrupto, it's suspect that isn't the real and final tally.  More on that for another day.

With almost five figures tossed in just days from election day, it's next to impossible to suggest Beth Mason is unaware those monies weren't directed to the hundreds and hundreds of 'campaign workers,' in the 4-4.  The exploitation of the Hoboken Housing Authority residents for a mere pittance earns Beth Mason the title Queen of Wheeling.  Her political consultants certainly believe the money doesn't place her in legal jeopardy with the NJ Attorney General even as the November election remains under review.  But the court of public opinion has yet to weigh in on her actions and in May they get the chance to do so when all of Hoboken turns its lonely eyes to the voters of the 2nd ward to end her financial pollution of local elections.

In the video below, the brief introduction is obviously paining Beth Mason as she must await conclusion of the remarks before shuttling it off to a subcommittee thus preventing the public from weighing in on the matter at the next City Council meeting.  The last thing she likes to hear from the public is questions, most recently from 2nd ward resident Eileen Lynch on rent control.  Even worse would be more questions and comments on wheeling after her role in the rancid temporary budget fiasco last month.

A cynical plan hatched between Beth Mason and her ally Mike Russo on this election reform package will look to chop up its elements so she can continue to flood the town with her money in the council races above and beyond the legal limits via her PAC - "Friends of Beth Mason."  Then she'll crow about being "a champion of pay-to-play" all the while she's paid to play with a puppet sitting next to her on the City Council doing the bidding of her and Mike Russo.

Beth Mason has lobbed bombs at her colleagues on the City Council before for merely the appearance of impropriety when it served her political ends.  The local media has yet to even question her actions on the transparent destruction of existing election law.  Al Sullivan in the Hudson Reporter touched on the race with Tom Greaney Sunday noting her earlier contributions to Tim Occhipinti without even mentioning the issue of her onerous funding.

The election reform package will be an issue in the public's mind although the passage is clearly not going to pass in its current form.  The housekeeping to the original pay-to-play ordinance will most likely be moved along at some point but detached from the critical component of enforcing the limitations on maximum contributions.

The video below shows Peter Cunningham laying out the importance of upholding wheeling portion of the legislation, while some other members notably Council members Nino Giacchi, Mike Russo and Beth Mason seem more than a tad disinterested.

The Council of No can't wait until they can weigh in with a big negative.  The question is will they pay for it at the polls in May?