Hoboken Councilman Ravi Bhalla has quickly countered the letter by Assemblyman Ruben Ramos.  It should be crystal clear who is working to advance the power of Hoboken residents and support our true freedoms in free and fair elections and who is fighting for the status quo with all its loopholes against.

I write in response to Assemblyman Ruben Ramos’ letter regarding my recent commentary on his February 16th letter to the City Council regarding campaign finance reform.

While Assemblyman Ramos is dead wrong in his claims about alleged lapses of judgment when it comes to pay-to-play, he is certainly entitled to his opinion.  When these false accusations were first made about me about a year ago, my response to media outlets was that I would pledge to work to strengthen our pay-to-play laws and close the current loopholes in the law in Hoboken.  In co-sponsoring anti-wheeling legislation along with Councilman Cunningham, I seek to follow through on the promise I made to the public when this topic was raised last year.

Assemblyman Ramos may find my efforts ironic, but I feel that action, not words, is the best means for the public to truly know a public official’s position on pay-to-play and wheeling.  The pay-to-play and anti-wheeling measures I have advocated are a part of that effort to put words into action.

Regrettably, in the span of two days, Assemblyman Ramos has accused a sitting mayor (Mayor Zimmer) of trying to “score cheap political points” by advocating campaign finance reform, and personally attacked a sitting chairman of the local Democratic Party (myself), in response to our good faith efforts to close loopholes in campaign finance laws.  I find this conduct unbecoming of an assemblyman representing Hoboken and highly disrespectful of Mayor Zimmer and myself.  I wonder if this type of behavior would be tolerated if it were directed at other mayors in Hudson County.  Most importantly, I also believe it calls into question whether Assemblyman Ramos is truly serious about addressing the corrupting influence of money in local elections.

If all of this back and forth demonstrates anything, it is that there are problems in our current finance laws that need to be addressed.  Let’s move forward and work together to close loopholes in our campaign finance laws and fix the problem at hand.

If nothing else, I am pleased that Assemblyman Ramos, in his letter, has stated his support of Mayor Zimmer’s efforts to enact pay-to-play reforms.   Accordingly, instead of personal attacks, I request that Assemblyman Ramos provide the Mayor and City Council with constructive input on how to strengthen the anti-wheeling ordinance proposed at last week’s meeting.   On the issue of pay-to-play and campaign finance, the public has a right to expect action, not words, from our public officials, including Assemblyman Ramos.

This letter originally appeared on Hoboken Patch from Assemblyman Ruben Ramos.  It provide insights into the mind of the Machine adamantly oppossed to restricting wheeling.  For them such an event would be an absolute catastrophe.

Ramos does a pretty good job attempting to muddy the waters.  He is trying to say Hoboken is not the master of its own domain and can not push ahead to stop wheeling.  We've seen quite a bit of that in recent days.  It reeks of desperation.  Both sides know this would be the absolute death knell for the backhanded money laundering to overwhelm the will of the people.  Be it a PAC or an individual, shutting off the loopholes will place Hoboken in good company - such as Atlantic and Monmouth counties and Marlboro township.  How does Ruben Ramos explain that?  He doesn't and he can't.  Instead Ramos tries to argue about individual self-funded campaigns.  That's not even at issue here.
(Minions please take note before you try to trot out this rubbish.)

Let's be 100% clear.  This anti-wheeling legislation by reform members of the City Council: Peter Cunningham, Ravi Bhalla, Carol Marsh and Dave Mello puts a stake right into the heart of the Soprano State.  Dead center and will kill them dead, dead, dead.

For that reason, expect them to fight this like nothing else.  They already have with Beth Mason urgently fighting to prevent even a brief introduction of the details by the original sponsor Peter Cunningham. 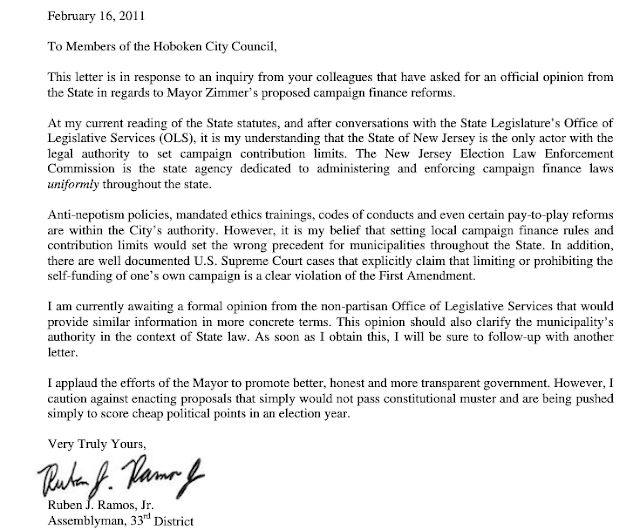