Greg Lincoln held his kickoff Thursday night and the event brought out several dozen people on a cold night including some real star power with the mayor speaking in support of his 3rd ward candidacy along with former Councilman Tony Soares.

Everywhere you turned though was another local official.  It's a nice show of support for someone highly respected in the Hoboken community.  Greg's speech is notable on several fronts but most importantly, he's asking for support to make the 3rd ward battle a real race.

There's enough new residents in the 3rd ward to give Mike Russo a real handful of trouble that he's given to all of Hoboken.  But it's required to get the word out.

As the Irish political philosopher Edmund Burke said:
All that is necessary for the triumph of evil is that good men do nothing...

The following is the letter from Mayor Dawn Zimmer to the Appleseed organization concerning transparency on the hospital sale negotiations: 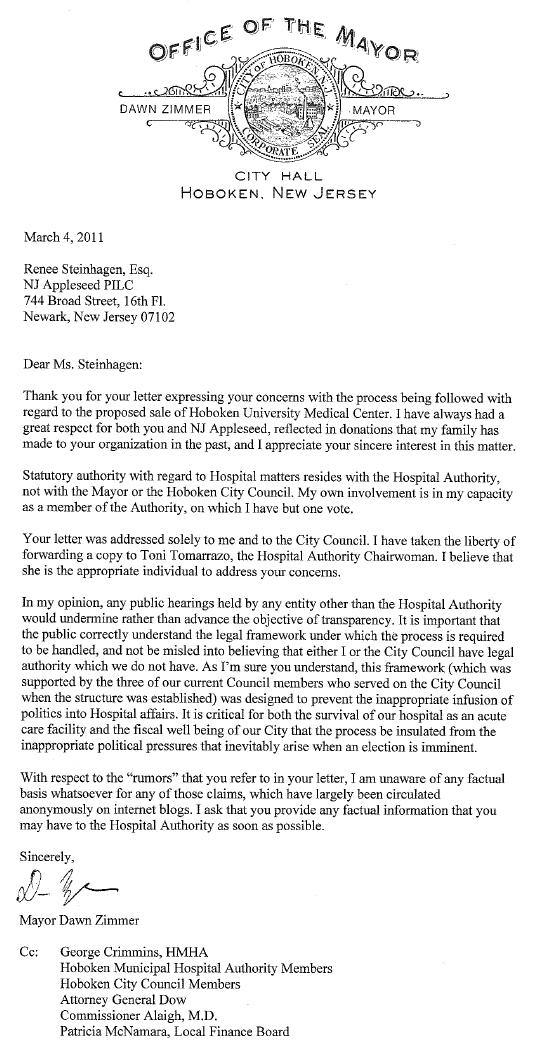 With the sale of Hoboken University Medical Center to HUMC Holdco pending and likely only days away from completion, an effort to stage a last minute sabotage is well underway with Beth Mason's propaganda vehicle Hoboken411 or Mason411 doing everything possible to stop it.


Mason411 pointed its bottomless bile at one of Hoboken's most revered good government advocates over decades, Eric Kurta in a bid to undermine his 1st ward council bid against incumbent Terry Castellano in another addition to its toxic brew.


A letter from Alice Crozier, President for People for Open Government is the vehicle used to inflict the damage: 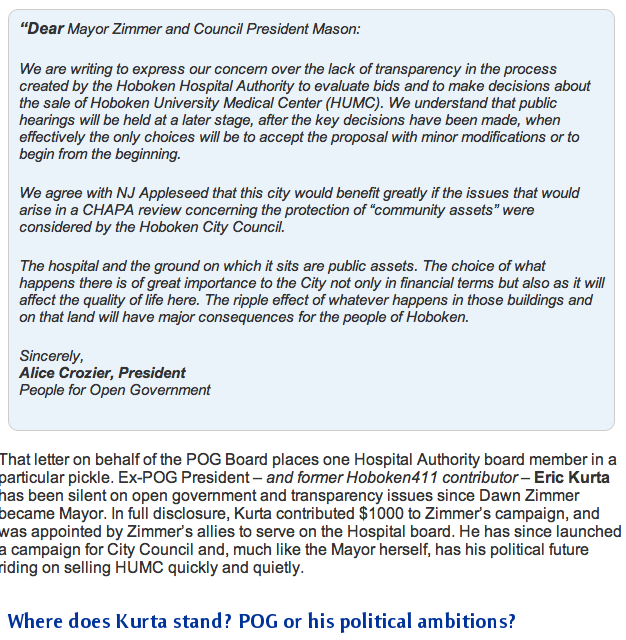 There's been an operation to undermine the sale of the hospital over months.  MSV attended the early January meeting when the negotiation with the bidder was announced and Councilman Mike Russo flat out declared the Hospital Board had no authority to sell the hospital.  The comment went unreported in any of the local media!  Russo added his concern how his personal in and out of network insurance cost would be affected.


Councilwoman Beth Mason sat quietly at the same meeting and has recently kept a low public profile on the matter of the hospital negotiations until the last City Council meeting where an obvious coordinated effort began to complain about the Hospital Board not giving the City Council a role in the sale.  The only problem - the City Council has no role in the sale, it voted to approve the creation of an independent authority who is charged with any decision.   The threats to take legal action and force Hospital Authority members to answer all their questions is an absolute farce.  The Hospital Authority was designed to prevent the exact politicization we see days before the transaction approaching completion.


POG the legendary organization finds itself in a most unfortunate position.  Weeks ago back in early January, the process for bidding ended and the mayor appeared with many members of the public to announce the process would now enter into a quiet period of negotiations followed by a public process to review the hows and whys the bidder was chosen and give the public an opportunity to weigh in on the matter.


The Jersey Journal interviewed the Hoboken Municipal Hospital Authority Chairwoman Toni Tomarazzo this week and she stated when negotiations are completed all the reasons why HUMC Holdco was selected for exclusive negotiations among the bidders would be revealed.


None of this is actually news and everyone has known the process for weeks already.  The public meeting on the matter was held in early January.  (MSV put up the complete video when it became available that month and the Hoboken Journal posted its video from the meeting prior.) So why the attacks about "transparency" in the 11th hour with negotiations almost concluded?


Well it's political season and the bile from the boys of hate at Mason411 are in her majesty's service in a bid to aid her control over the City Council.  Nothing new there, Mason's vile angry little minion has been curtailed from his Ch. 78 news anchor duties and he's been reduced to working on crappy telephone push polls across the city.


Everyone knows that tune and how Hoboken411 operates.  With its dwindling readership, Hoboken Patch has already surpassed it as the only full time news website in town and others such as the Boken and the Hoboken Journal have eaten into its readership.  Hoboken411 lost any semblance of creditability long ago.


But why are others jumping out of the woodwork now?  The announcements now to throw a wrench in the sale is clearly at least in part, an organized effort.  You haven't heard any complaints about keeping the noose around the city's neck with a $52 million bond underwritten by the Hoboken taxpayer in City Council meetings since 2007 either.


Someone re: a reporter should spend some time investigating why POG and another organization are all saying the same things along the lines of Mike Russo concerning the sale of the hospital just as the transaction nears completion?  Why is POG President Alice Crozier and this group Appleseed believed to be linked to Beth Mason writing letters publicly to the mayor and Councilwoman Beth Mason but not including the group charged on the matter of the hospital - the hospital board?

The POG letter, like the one from Appleseed, is directed to the Mayor and Council President because it asks for a hearing before the City Council that would consider aspects of the sale called for in the CHAPA law (Community Healthcare Assets Protection Act) that the HHA is not legally required to take into account but which we think it is unwise to ignore.

While MSV appreciates the response, it's notable the timing is at best unfortunate and the letter is already being used as a political ax against former POG President Eric Kurta and the mayor.  Noticeably absent from the Mason411 hit job is that this request directed to the mayor and Beth Mason has no legal jurisdiction on the sale whatsoever.


Looking back, it was the Hoboken City Council with members Terry Castellano and Mike Russo patting themselves on the back when they put the noose around the taxpayers necks.  Councilman Nino Giacchi was also on that City Council voting affirmative.  They gleefully signed on the dotted line.


The Jersey Journal printed its story earlier this week on a financial transaction for a leaseback opportunity - a method to free up cash in lieu of the hospital being sold.  It was frankly premature for the anticipated buyers to do so but it is hardly indicative of anything but a commitment to raise the funds required to make a long term commitment and keep an acute care facility in Hoboken for years to come, the stated goal of the hospital authority.


Those airing complaints with a pending sale about transparency are far too late and succeeding explanation on the transaction will be coming in due course.  No transaction of this complexity in the tens of millions of dollars is going to be publicly negotiated.


As MSV predicted earlier, Mike Russo and his cohorts would try to sabotage the sale of the hospital in any way possible.  And so he has.  MSV has first and second hand knowledge Beth Mason has been working quietly behind the scenes, talking to the union representatives and speaking to members of the community organizations to undermine the transaction as well.


Now Beth Mason appears to be launching a final salvo in a last second bid to stop another victory for Hoboken.  In 2007, Beth Mason spoke out against the City of Hoboken going into the hospital business.  Now she is doing everything she can using her propaganda vehicle, Mason411 in a desperate attempt to keep another good day in Hoboken from occurring.


Will her and Mike Russo's efforts succeed?


Related: Grafix Avenger has an exclusive on one of the players emerging emerging out of the mire attempting to muddy the hospital sale as well.  She notes how odd it is this group has written a letter complaining about the matter.  But she wonders, why haven't they written the letter to the hospital board?  GA has the answer: