Board of Education candidacies announced

Here's the latest news on the announced candidates: 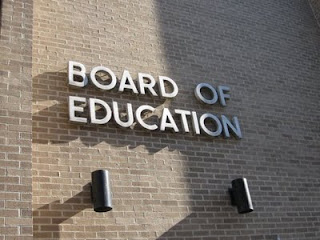 Nine candidates in all and one official slate with most likely one other to be announced at a later time:


Steve Feinstein is a Hoboken parent of two: one in Hoboken High School and the other in Elysian charter.

Clifford Godfrey is a Stevens graduate and volunteer for Save the Youth and the Stevens basketball program.

Notably absent is the Maureen Sullivan, or Maureen First brand of Real Results.  BoE commissioner Sullivan while making about one good suggestion a year has completely alienated her BoE colleagues and parents in the district.

She's been obstinate in regurgitating misinformation and then being schooled by Business Administrator Bob Davis on her claims.  Fortunately for her, she's not up for re-election otherwise she would be better off sitting that out too.

Talking Ed Note:  If I had one good idea a year to offer, I'd not alienate other team members re: board votes.  Then you could actually have a shot at getting something done.
Posted by SmartyJones at Tuesday, March 08, 2011
Board of Education candidacies announced
2011-03-08T21:00:00-05:00
SmartyJones
Comments

Breaking: Mayor Zimmer - 'It's time to move the parade to a Wednesday'

Mayor Dawn Zimmer announced at a press conference today she intends to move the St. Patrick's Day Parade to a Wednesday to avoid the problems Hoboken residents have seen over recent years with the event held on a Saturday.

The mayor will be looking to the City Council, Hoboken residents and the business community and parade organizers for support in making the move.

In all of 2009, there were three reported rapes and two reports over the Friday-Saturday parade weekend.

MSV's non-scientific snap poll from last night shows most respondents support making a change in the parade from Saturday.  More to follow.

Update: The NY Times released its story on the parade and it's not pretty:

Indeed the level of excess is only now coming into focus; the city’s police chief and the mayor held a news conference on Tuesday to announce some of the grim statistics. There were 34 arrests, up from 25 in 2010. Two women told the authorities that they were sexually assaulted over the weekend.

Officials at Hoboken’s main hospital said they admitted 166 people on Saturday, the highest such one-day total at the hospital.

Firefighters responding to a backyard blaze were greeted by revelers on a balcony who spat down and also poured beer at them. Then someone threw a flower planter down, the fire chief, Richard Blohm, said.

Hoboken411 the truth challenged website all things Beth Mason has begun its all out jihad to win her re-election in the second ward.  In its typical juvenile cartoonish fashion, her ad sits above a threatening jihad like figure brandishing a huge knife.  What does a knife have to do with the St. Patrick's Day Parade?  Good question.

Readers sent in some of the latest from Hoboken's online cesspool:


But that's not the end of it.  Beth Mason sits proudly over an attack on dwarfs too:


And here is yet another Beth Mason appearance and yes, it's ironic:

As most readers know well Hoboken411 is on a jihad to get its sponsor Beth Mason moved up the ranks of power in town.  The political operations run in City Council meetings are then reported as news on Hoboken411 in the hope that voters are just paying scant enough attention to the details.

Beth Mason has every right to spend her family's money as she wishes, that's never been an issue although she tries to use that as a defense.  That's strictly a personal matter.  But is this the way she wishes to achieve her ambitions?

At the last City Council meeting Beth Mason's attempted to limit the speech of others this time both the public and once again her council colleagues.

More on that to come as MSV goes to the videotape.  You need to see it to believe it.  But clearly the wheeling moneyed designs are well underway and Beth Mason intends to suffocate Hoboken with her money in an attempt to wield yet more power.

The Chairpersons of the Republic and Democratic Parties of Hoboken jointly urge Hoboken residents to serve as District Boardworkers (a.k.a. “poll workers”) in the 2011 elections.

“Serving as a poll worker is a rewarding and proactive way to get involved in the democratic process,” said Diana C. Davis, Chairwoman of the Republicans of Hoboken. “We would like residents in Hoboken to be aware of the process of applying to serve as a poll worker.”

Residents interested in serving as poll workers must fill out a simple, one page application (see attached) and submit it to the Hoboken City Clerk’s office, located at 94 Washington Street, Hoboken no later than March 11th.    The submission of an application does not guarantee designation as a poll worker in any particular election, and applications submitted after March 11th may be rejected based on timeliness.

“This is a wonderful opportunity to serve the community and take an active role in the election process in Hoboken,” said Ravi S. Bhalla, Chairman of the Hoboken Democratic Party. “I hope that residents interested in improving the voting process will consider serving as a poll worker this year.”

In addition to the public service residents provide by serving as a poll worker, they are also compensated in the form of a $200 payment for the day and the satisfaction of knowing they performed a service for Hoboken’s community.

Talking Ed Note:  One of the biggest contributions residents can makes is to participate in this election day activity.  MSV was given first hand reports of problems in the November 4th ward election, still pending review at the highest law enforcement agency in New Jersey of serious problems.

One person relayed their knowledge of voters in the 4-4 who had already voted by absentee were being "allowed" to vote on the machines.  According to that witness, it was not isolated.  Another eyewitness noted a political operative was doing everything possible to slow down the voting process in the 4-2, a stronghold of reform voting in the fourth ward.

MSV like the public can only await the results of the New Jersey Attorney General's Office and if the numerous problems in the massive fraud of that election will be pursued.  Tim Occhipinti "won" on the machines with a difference of 50 votes.  Those who reported on election night witnessed the immediate celebration in the Occhipinti for Council campaign even as hundreds of paper vote by mail ballots had yet to be tabulated.

They clearly knew the results of those efforts by the Queen of Transparency and the King of Absentee Ballots.
Posted by SmartyJones at Tuesday, March 08, 2011
Wanted: Poll workers at elections to protect voter integrity in Hoboken elections
2011-03-08T07:15:00-05:00
SmartyJones
Comments