Beth Mason has a petition drive going on and today a crew of paid staffers working outside the 12th and Washington office.  There was no sign of the self-proclaimed "watchdog," although her letter is selling yet more lies on the budget surplus in this weekend's Hudson Reporter.

From what MSV witnessed, not one of the dozens of people walking by her office signed although one person asked why pictures we're being taken as he was eating a Mason bagel spread.  Told the pictures were gong online he begged that he not be included.  We patted him on the arm and told him not to worry leaving after telling him the two magic words.  Neither included Franz.

The guy said he was just there for the bagel.

Talking Ed Note:  Monday is "Grist for the Mill," and if you have anything to put forward get it in now.  This grist promises to be extra chewy and will anger some people who won't believe the truth is out yet again.  It's going to be delicious.
Posted by SmartyJones at Saturday, March 12, 2011
Beth Mason still collecting petitions on Washington St. and the Shipyard
2011-03-12T15:36:00-05:00
SmartyJones
Comments

1st ward council candidate the Eric Kurta: 'Our work on campaign finance reform is not done'

At the March 2 City Council meeting, Council members voted unanimously on legislation put forward by Hoboken’s People for Open Government (POG) addressing unethical campaign contributions to political candidates and officeholders. Unfortunately, our work cleaning up elections in Hoboken is not yet done, and I fear this legislation will serve a little more than window dressing for our City Council which is unwilling and unable to police itself adequately.
As recently as 3 weeks ago, the Council majority killedlegislation which would have limited an individual's ability to wheel money to candidates – a way for donors to legally launder money and circumvent campaign finance laws. Several local residents, aware of how wheeling has influenced recent elections, spoke out about the issue at the March 2nd meeting. Hypocritically, the Council acknowledged the legislation they just passed did not go far enough and asked POG to draft a new ordinance – just like the one they rejected.
As the former president of POG, I am intimately familiar with the good work the organization has accomplished over the years. POG has made Hoboken’s city government more open and transparent and has helped to clean up much of the corruption that burdened our great city for too long. It is heartwarming to see that those long hours spent petitioning in the streets, negotiating a lawsuit settlement, and hammering out ever-improved legislation have finally resulted in legislation. It is good news for the people of Hoboken that we have taken such large steps toward a fairer election process. However, the City Council must remember that drafting and passing legislation is the responsibility of the Council, not POG.
I applaud the Council for passing these much-needed pay-to-play ordinance revisions which close loopholes in our city's campaign finance laws, and I commend my successor Alice Crozier and the rest of POG’s board for their hard work on this issue, but we know more needs to be done. As someone who has led the charge to jump start campaign finance reform in Hoboken, I urge the City Council majority to make good on their promise to adopt a comprehensive anti-wheeling ordinance. We need to prevent big money and outside influences from buying Hoboken elections, and there is no excuse for delaying. I urge the City Council to work expeditiously with anyone willing to craft a comprehensive anti-wheeling ordinance that will prevent donors from circumventing the public interest. I gladly offer my assistance in helping toward that end.
The people of Hoboken know that if we want lower taxes, a smarter public transit system, well-maintained infrastructure, and more park and open space, then we need to ensure that our government is open and responsive to the citizenry. To that end, the electoral process must be fair. Thanks to the continued work of POG, we are beginning to see some improvements. But, we will need a comprehensive campaign finance system if we are ever going to elect representatives who look out for the public interest and not their own self-interest.
Sincerely,
Eric Kurta

Just days after Hoboken completed installation of the wireless flood monitoring system, 4th Ward Hoboken Council candidate Rami Pinchevsky sent an email to Mayor Dawn Zimmer and Director of Environmental Services Director Jennifer Maier asking that the City do more to clear the streets after moderate to heavy rains.
“Over the last few days, Hoboken has undergone a number of flood watches. Although, the city did not receive enough precipitation to create a flooding emergency, it did spawn a separate public nuisance.” Puddles of overflow from the sewage system have accumulated on the sidewalks and streets of the 4th Ward. The stagnant water, dirt, garbage, and other pollutants is unsightly and may even pose a health concern.
Rami wrote in his email, “while I applaud your tireless efforts to correct the underlying causes of the flooding problem, I ask for your help in providing city residents with short-term relief in the aftermath of flooding. I am asking that the City do more to clear the streets and sidewalks following moderate to heavy rainfall, which would go a long way towards improving the conditions of our streets and improving the quality of life for 4th Ward residents.”
Rami is an outspoken advocate for the new flood monitoring system as the first step toward creating a smart, cost-effective flood prevention system in Hoboken. His own car has been flooded twice in recent years. In contrast, his opponent adamantly opposed the flood monitoring system as a waste of taxpayer money since residents “could simply watch The Weather Channel.”
For more information about Rami Pinchevsky, please visit RamiForCouncil.com
Photos of the sewage overflow are here: www.flickr.com/photos/ramiforcouncil
Video of Occhipinti's statements against flood monitoring system: youtube.com/user/ramiforcouncil
Posted by SmartyJones at Saturday, March 12, 2011
COUNCIL CANDIDATE RAMI PINCHEVSKY TAKES ACTION ON FLOODING
2011-03-12T09:14:00-05:00
SmartyJones
Comments 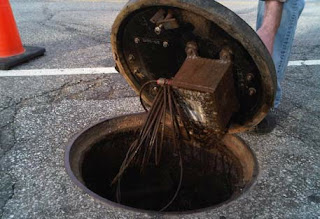 The City of  recently finished installing a state-of-the-art wireless sewer monitoring system. Sensors have been placed under manhole covers in key locations throughout the City.
“This is one of the most technologically advanced and innovative wastewater monitoring systems available, and it will collect and transmit important data today as we are hit by another strong storm,” said Mayor . “I have been advocating for this system since 2007 when I was a Councilwoman, and I’m proud that we are another step closer to addressing our longstanding flooding problem. The wet weather pump under construction should alleviate much of the worst flooding, but we need this high-tech system to collect the data we need to understand how we can completely and cost-effectively solve our flooding problem for the long term.”
In June, 2010, the City Council voted to award a contract to EmNet to install the real time flood monitoring sensor system. On March 3rd, EmNet completed the installation of of the system.
EmNet is a multi-disciplinary engineering company specializing in real time wireless technology solutions to help optimize various utility assets. The EmNet monitoring technology utilizes a network of embedded sensors, computerized manhole cover telemetry devices, and innovative data analysis tools. This system is entirely battery powered and uses cellular connections to broadcast real time water level data from the sewers to a secure website. Advanced data analysis tools are used to transform large amounts of data into insightful information concerning the behavior of the sewer system under various weather conditions.
Link: http://www.hobokennj.org/news/hoboken-completes-installation-of-wireless-flood-monitoring-system/
Get the latest  news:
Email | Text |Website | Facebook | Twitter | RSS
Posted by SmartyJones at Saturday, March 12, 2011
EmNet flooding technology installed, flood pump coming online this summer
2011-03-12T09:00:00-05:00
SmartyJones
Comments