According to a story at Hoboken Patch, the Russo family costs Hoboken another $100,000 based on evidence of illegal benefits paid out in health insurance benefits to former mayor and convicted felon Anthony Russo.  The information comes way courtesy of the auditing efforts conducted by Mayor Zimmer's Business Administrator Arch Liston.


Anthony Russo obtained the illegal health insurance even after the State conducted a review of his service and eliminated his time as mayor toward any credited pension service years ago.  How the ex-mayor and convicted felon was able to obtain the paid health insurance for himself and most likely his wife, Michele "five dollars a tow" Russo is at the moment unknown.


Business Administrator Liston identified two people ineligible for the city paid health benefits after an audit was conducted late last year.  The other person is not a public figure and has not been named but was also removed from the city rolls.

Councilman Mike Russo has been challenged on his knowledge about the taxpayers again being taken for a ride again by his family but is citing ignorance pointing to an earlier audit conducted by Fiscal State Monitor Judy Tripodi as his defense.  At that time a handful of people were eliminated from the rolls - but Anthony Russo was not among them.  Mike Russo has pointed to that as clearance for his father's receiving taxpayer paid health benefits, but an earlier Hudson Reporter story demonstrated he was ineligible for health benefits years previous.   The likelihood Mike Russo could feign ignorance on the matter is questionable at best.  How many family dinners do you think that benefit lost came up?


Michele Russo has also been a common fixture at recent City Council meetings.  She participated in the ceremony with Councilman Mike Russo when he was appointed Vice President in the City Council under his ally Councilwoman Beth Mason.


The City is reportedly investigating how to recover the taxpayer funds estimated to be in the area of $80,000 - $100,000 based on Hoboken Patch's report.


Their story referenced the accusation by Councilman Mike Russo claiming his family was targeted in the audit by the mayor but failed to note the audit turned up two ineligible candidates, Anthony Russo being only one pointing to a real broad based effort.


Even by the standards of the Council of No, their vehemence to stop all progress for Hoboken proved concerning to many observers.  MSV noted there appeared to be some additional motivation although Mike Russo has toned down his "act" somewhat recently even if the votes are the same.  Now we know where the added motivation derives.

As it turns out the timing of the revelation had nothing to do with the mayor and everything to do with a fight to retain the benefits and keep the Hoboken taxpayer on the hook.  Anthony Russo's health insurance benefits were ceased only at the beginning of this month as he filed an appeal to retain them delaying the inevitable.


Does anyone remotely believe that Mike Russo had no knowledge of any of this until the mayor's letter to the City Council last Friday?  Yet he blames the mayor for the timing of the exposure even with his father's appeal being the cause.


Anthony Russo still owes over $300,000 to the City of Hoboken.  His reduced sentence was based on restitution of that money but he claims he lost all his money and illicit extortion gains from gambling.


Now you can add approximately another $100,00 to the bill.  Mike Russo and Terry Castellano have no interest in seeing for any of it paid back to Hoboken and have remained silent as Anthony Russo fought his appeal to get more from the taxpayers.

But they voted to have Director Ian Sacs pay for a professional conference in Vancouver he attended because they deemed his travel inappropriate at Wednesday's meeting.   They tried to stick him for the $1,000 transportation cost even though it had been approved in advance by Business Administrator Arch Liston.


What kind of budget hawks are these?

Da Horsey wishes to dedicate this community serving Russo breaking series to Executive Publisher Jimmy the K.  His encouragement, perspective and support has been instrumental in the establishment of MSV after ex- mayor Peter Cammarano's arrest and more importantly ever since.   Without him, MSV would have never happened.

Reform Council Candidates to current council: Do Your Job! 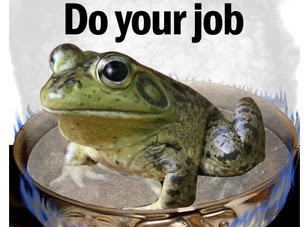 While we are delighted that the City Council passed Mayor Zimmer's bond ordinances for upkeep and acquisition of parks, we are dismayed by the lack of priorities shown by the council majority in rushing to end session by midnight. The priorities of our municipal government should be doing the business of the people to the best of their ability, trying to meet an arbitrary deadline because Council Members would rather get home than finish their jobs.

We pledge to take the responsibility of the council seriously and put the interests of our constituents first. If the length of the meetings is such a problem, you either stick it out or meet more frequently. It is negligent and irresponsible for our council to simply get up and and walk out.

When business is rushed in this manner, our City Council misses important operational deadlines. Last night due to a hurried majority led by Council President Beth Mason, Hoboken will be unable to pay the police in concert with the much-hailed contract signed by the Mayor a few weeks ago.

We cannot afford more of the same. We must elect council representatives that put the public interest before self-interest. We must Move Hoboken Ahead. 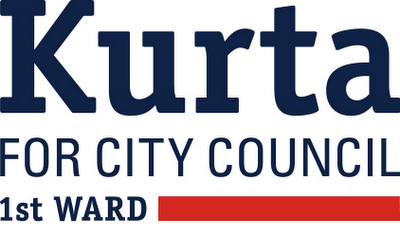 STATEMENT FROM 1st WARD COUNCIL CANDIDATE ERIC KURTA ON PARKS
I am proud that Mayor Zimmer's bond ordinance to acquire more parks in Hoboken has passed the City Council. Her parks proposal is an important part of a much larger plan to make Hoboken more family-friendly.

However, it is disheartening that political grandstanding of a few councilmembers who needed clarification of the bond process and their legal responsibility jeopardized this sorely needed public good. If we genuinely want to improve our city and keep growing families from looking for greener pastures, we need to allocate more parks now. Delays must not be tolerated.
Posted by SmartyJones at Thursday, March 17, 2011
1st ward council candidate Eric Kurta: Stop the grandstanding roadblocks on Hoboken Parks
2011-03-17T22:52:00-04:00
SmartyJones
Comments

Bike Hoboken is proud to be co-sponsoring H-Mag's March Mixer at Dino and Harry's. See the official invite from H-Mag below:

hMAG's March hMIXER is right around the corner! Co-sponsored by Bike Hoboken and benefiting Rock'n 4 Autism, the March mixer will be on Wednesday, March 30th at Dino & Harry's, 7-9PM. 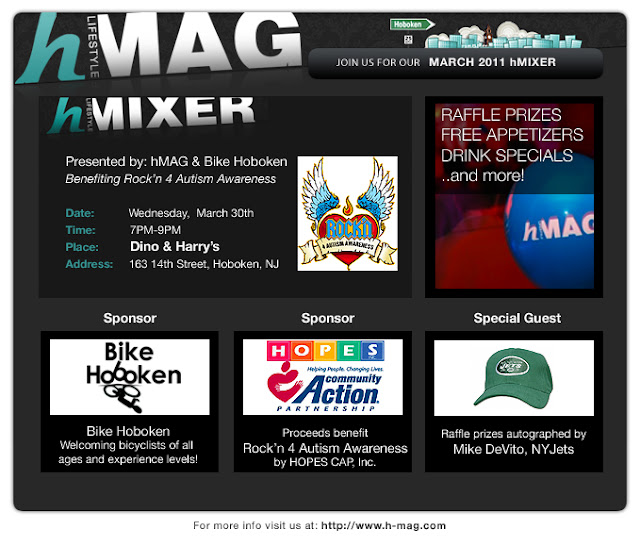 Mayor Dawn Zimmer's $20 million park acquisition bond ordinance unanimously passed the City Council at last night's meeting to thunderous applause, and as a 4th Ward resident, I could not be happier.

However, it is disheartening that the public needed to get so riled up in the first place. The fact is that many of our elected representatives were not acting in the best interest of their constituents when they voted against this parks plan. Fortunately, the public was able to pressure those 4 members to change their minds over the past two weeks, but we should not forget their political grandstanding which jeopardized this important ordinance.

I have been a long-time advocate of additional parks in Hoboken. My first involvement in local issues was over the Save Block 11 movement. Ever since then, I have been working to get more parks in the 4th Ward because it is a community resource that is severely lacking in our part of the City. I am extremely proud of my friends and neighbors who came out to support the acquisition of more land for parks against hypocritical lawmakers who falsely claim to work for the public interest.

We finally have a plan to buy more land for parks, a Mayor who will carry it out, and a community so passionately behind the idea that the council majority could not stand in the way.

Mayor Zimmer Thanks Council for Passage of Open Space Bonds

"I am very excited that the Council unanimously passed the $20 million open space bond ordinance. I was disappointed when Council Members Russo, Castellano, Giacchi and Occhipinti voted against this important measure on first reading, and was gratified that they reversed their positions and voted in favor last night. This important step towards acquiring more land for open space represents the fruition of years of hard work by many, many community members. I am proud that the Open Space Trust Fund sponsored by Councilman Cunningham and myself four years ago, and all of the campaigning we did to help pass the referendum, provided the foundation for this key step to bring more park space to the City of Hoboken.

As I said in my State of the City address, we must ensure that every Hoboken resident is a short walk from a quality park. Given the lack of park space on the western side of our City, my Administration will be focusing our energy on that area of Hoboken.

I was surprised that some Council members suggested in press releases and tweets that I had given them private assurances on the basis of which they changed their votes from the first to the second reading. I want to assure the public that no such private assurances were given. All Council members were told in private precisely what they already knew based on my public statements before the first reading: I am committed to bringing more park space to the western side of our City where it is most needed.

I want to thank all Council members for supporting this bond as well as the $1.6 million bond for capital improvements on existing parks. Together these two ordinances will give us the tools we need to provide quality parks for our residents."
Posted by SmartyJones at Thursday, March 17, 2011

Transportation and Parking Director Ian Sacs will host a community meeting on Wednesday March 23 from 6:00 to 8:00 pm at the Rue School gymnasium, 301 Garden Street, to involve residents in the process of improving safety along Newark Street.

The City of Hoboken has $240,000 in federal funding for improving safety along Newark Street between River Street and Washington Street. The funding, which was secured by Senator Robert Menendez, was awarded in 2009, and due to the time-sensitive nature of the funds, community input is critical to moving forward with the project.

On July 19, 2010, the City held the first community meeting to get initial public input. Below is a word cloud highlighting the feedback from that meeting. 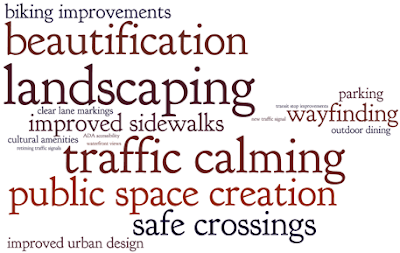