Tapas with Tom at Lola's on Sunday 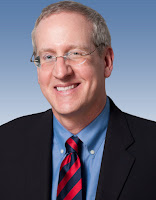 
We will be gathering at Lola's 153 14th Street from 2 to 4 pm
There will be food and a cash bar, and of course kids are welcome.


Carol Marsh will be the honored guest.


Please invite your friends and neighbors  We hope to see you there.

“HOP” COMMUNITY SHUTTLE BUS SYSTEM EXCEEDS 50,000 PASSENGERS
50% Ridership Increase in 6 Months
The Department of Transportation and Parking announced today that the Hoboken Hop community shuttle bus system recently surpassed 50,000 passengers since re-inception of the program by Mayor  in Fall 2009. Since mid-August 2010, the Blue Hop has been joined by the Green and Red Hops for a comprehensive city-wide system, providing shuttle service within a 5-minute walk of nearly every  resident.
“Thousands of residents in all corners of the city are finding The Hop easy and convenient for getting around ,” said Mayor . “I am happy we are able to provide this service to our residents who deserve high-quality community transportation options.”
Over the past six months, system ridership has increase by 51 percent, with hundreds of passengers riding The Hop buses every day, including students, seniors, commuters, parents, and city employees. Several larger buildings have even found The Hop as an economical alternative to the high cost of exclusive shuttle services. Since the implementation of the new Hop system, nearly four times as many residents have benefited from shuttle services compared to the Crosstown Shuttle. 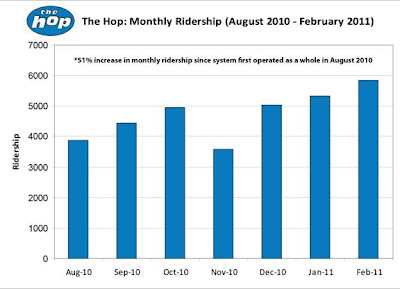 The position of each bus along its route is tracked in real time using state-of-the-art GPS technology and is accessible by three means:
The Hop webpage on the city's website receives more daily hits than any other page (except the homepage), and the text messaging system exceeds 2100 requests per week.
Unlimited ride monthly and annual passes are currently undergoing testing and are expected to be available to the public this summer. They will be available for purchase at Hoboken Parking Utility as well as online pending City Council approval of HPU’s permitting software. Condos and larger apartment buildings can already pre-purchase single-ride passes for their building tenants at the Parking Utility.
“We recognize that The Hop is critical to many residents as they move around , so making the system better is a major area of effort for us,” said Transportation and Parking Director Ian Sacs. “We're focusing on reliability and convenience at the moment as we add technology features that make the bus accessible for everyone.”
In Fall 2009, Mayor Zimmer re-instated the city's community shuttle bus and re-branded it "The Hop", with "hop on, hop off" service on the far side of every block along its route. The new system added GPS technology and improved on route coverage, frequency, and reliability. Since then, the system has expanded city-wide to three routes: Blue, Green, and Red.
Blue Hop: covers southern  up to .
Green Hop: covers western and northwestern  up to .
Red Hop: covers eastern and northeastern  up to .
The Hop service runs from 7:00am to 7:00pm Monday through Friday (Blue Hop runs until 8:00pm). During off-peak hours (9:00am to 4:00pm), the Red Hop operates as the Senior Shuttle. The current single-ride fare is $1.00, $0.50 for students, and free for seniors and children under 12.
For more information, including a live map, routes, and schedule of all Hop buses, visit the city's website: http://www.hobokennj.org/thehop 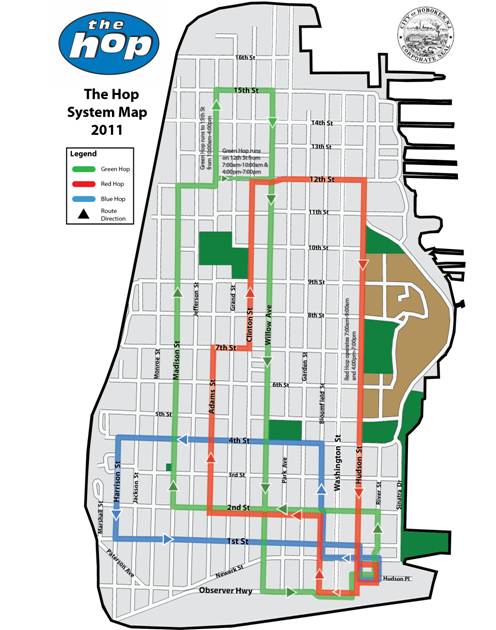 
RECEIVES $4.1 MILLION IN STABILIZATION FUNDING
Mayor  and the Hoboken Municipal Hospital Authority are pleased to announce receipt of $4.1 million in hospital stabilization funds for Fiscal Year 2011.
“We advocated strongly for this funding in order to enable  to continue to provide access to quality healthcare as we pursue the transfer of the hospital to private ownership,” said Mayor . “The Hospital Authority and I thank Governor Christie and Health Commissioner Alaigh for this critical funding.”
“As authority chairwoman, I’ve worked very closely with Mayor Zimmer and I thank her, Governor Christie, and Commissioner Alaigh,” said Hoboken Municipal Hospital Authority Chairperson Toni Tomarazzo.
“This support will help to ensure the continued operations of the hospital and our ability to serve residents of  and surrounding communities,” said Hoboken University Medical Center CEO Spiros Hatiras.
The Hoboken Municipal Hospital Authority is negotiating to transfer the hospital to new ownership with the objectives of maintaining the facility as a full-service acute-care hospital, relieving the City’s taxpayers of the $52 million bond guarantee obligations made to save the hospital in 2007, and preserving the jobs of Hospital employees. 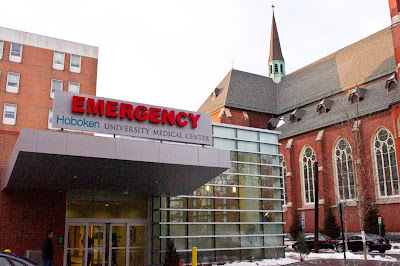 Dear friends and neighbors: my name is Greg Lincoln, and I am running for City Council in the 3rd Ward.

I am running for City Council because I want to bring the representation to the 3rd Ward that is long overdue. I believe that everyone in the 3rd Ward needs to be represented – not just those who benefit from the system and want to maintain the status quo.

I am running for City Council because I’m a homeowner and taxpayer who loves living in Hoboken. My wife, two sons, and I have lived here for almost six years and love the vibrant, diverse, and welcoming atmosphere of our town. Over the past 18 months Hoboken has been moving in a positive direction, yet my opponent seemingly does nothing but put up obstacles to impede this progress.

For too long, the 3rd Ward has been represented by a councilperson who is unwilling to properly do his job. A councilperson who submitted, without consulting his council peers, a temporary budget scribbled in pencil. A councilperson who, as the Chair of the Finance Committee, “lost” almost a million dollars in parking meter funds and called it a “mistake.” Meanwhile his friend, the former Parking Utility Director, has been indicted for stealing approximately 55 tons of quarters.

For too long, the 3rd Ward has been represented by a corrupt family dynasty that has been more concerned about their own finances than the interests of our city. We all know about the father, Anthony Russo, who pleaded guilty to accepting bribes, served jail time, and still owes our city over $300,000. There’s also the mother, who while serving as Parking Commissioner, was named in FBI documents for demanding $5-a-tow kickbacks. Despite these illicit gains, the family occupies affordable housing units that should go to people who actually need them.

I am running for City Council because we are at a critical juncture. The Mayor and her supporters on the council have taken firm stands on fiscal responsibility, nepotism, and pay-to-play; they have improved transportation and infrastructure, making Hoboken a better place to live. My opponent has resisted most of these positive changes.

I am running for City Council because the 3rd Ward deserves to have an honest choice.

This letter to the Editor was featured in last weekend's Hudson Reporter
Posted by SmartyJones at Monday, March 21, 2011
3rd ward candidate Greg Lincoln no "lost" million in quarters if elected to City Council
2011-03-21T19:00:00-04:00
SmartyJones
Comments