4th ward Council seat holder Tim Occhipinti on breaking the law, 'It's funny, I liked it!'


COUNCILMAN TIM OCCHIPINTI VIOLATES ZONING LAW – PAYS FINE
Fourth Ward Councilman and Chair of the City Council’s Zoning and Development Subcommittee, Timothy Occhipinti, plead guilty yesterday to violating local zoning laws. Occhipinti failed to remove campaign signs from his headquarters after last year's special election in the Fourth Ward in a timely manner and missed his original court date.
Fourth Ward City Council candidate, Rami Pinchevsky, said "Mr. Occhipinti owes Fourth Ward residents an explanation as to why he refused to take down campaign signs after receiving a warning from the city that he was in violation of the law."
"As head of the Zoning and Development Committee for the City Council, it is inexcusable that Mr Occhipinti would disregard the law in such a manner. His brazen behavior shows an utter disrespect to city residents and the law he has duly sworn to uphold. Mr. Occhipinti should publicly apologize for his behavior," said Rami.

Prior to yesterday’s court date, public records show that Occhipinti received a written notice to remove campaign signs from the windows of his campaign office, following this past November’s election. After his failure to comply with the warning, a citation with a mandatory court appearance was issued to him.

Talking Ed Note: Here's video of Tim Occhipinti leaving court yesterday after having pled guilty in Secaucus.  He was recently appointed as head of the Zoning and Planning Subcommittee by Councilwoman Beth Mason but broke the law and ignored the notice of the violation at his campaign office.  After skipping the court appearance in Hoboken, he made the court case this time.

The video shows Tim Occhipinti finding law breaking very amusing.  Before he's asked about breaking and flouting the law of the very committee he heads, he displays an arrogant response, putting his hand up to push the camera away saying "Are you kidding?" adding a political non-response.  His lawyer Michael Goldberg was also the lawyer for Peter Cammarano then interjects with some typical lawyer gibberish as the fine is being paid at the cashier window.

It should also be noted that the city incurred additional costs having a zoning officer attend the hearing out of town when taxpayer's dollars could be better spent here in Hoboken.  Of course Tim Occhipinti could have obeyed the law in the first place but he choose to flout the warning and the law altogether.

You won't be reading about this on Beth Mason's website Mason411.  Can't mess with her investment and she's in for maybe $20,000 just the last round.  (The law on individual contributions of $2,600, that's for the little people.)

Although this guilty verdict is in for Tim Occhipinti, there's not been any official notice from the NJ Attorney General's office on the much more serious matter of the massive alleged fraud in his November election.

His army of 575 paid campaign workers along with close that in submitted paper ballots remains under scrutiny of law enforcement.

Rami Pinchevsky spoke at the informal soiree speaking passionately on the importance of a park for the southwest and improving the traffic situation possibly taking steps to reroute some of it as a solution.  He also noted the contributions of his host and others in government including the mayor in advancing Hoboken and bringing much needed progress in a number of areas including spending and taxes.

Talking Ed Note: Enthusiasm was high and there was some added buzz as word got around about the head of the Zoning and Planning Subcommittee Tim Occhipinti had showed up this time for his court appearance in Secaucus earlier that day.  Occhipinti's headquarters violated the town's signage rules but he "zoned out," and boycotted the first court date in Hoboken perhaps believing he could escape scrutiny.

The court rendered a small fine and Occhipinti was questioned at the courthouse where he fled first to the police asking for aid to stop the questions.  He later fled out the side entrance with his lawyer's getaway car at the ready.  The lawyer is thought to be from the Peter Cammarano campaign.
Many residents who bought the Occhipinti "I'm independent" line are now beginning to discover just what a bill of goods they were sold.  The pet shop is once again open for business with Tim Occhipinti's sign back up.
How soon before the $40 collection for paper ballots begins anew?  It won't be long now.
Posted by SmartyJones at Wednesday, March 23, 2011
Former Councilman Soares' meet and greet Pinchevsky event a hit
2011-03-23T19:19:00-04:00
SmartyJones
Comments

City on surplus: let's hear the truth from the auditors

CITY AUDITOR CLARIFIES SURPLUS ISSUES
Due to confusion that was created by Council President Mason’s letter to constituents, the City asked for clarification from the City’s auditor regarding the budget surplus.
The letter speaks for itself, and in the interest of ensuring a full understanding of this issue, the public is strongly urged to read the auditor’s letter in its entirety to understand the full facts regarding ’s surplus and the manner it is legally permitted and fiscally appropriate to be used.
The letter can be viewed on the City website: http://www.hobokennj.org/docs/businessadmin/auditor-letter-3-23-11.pdf
Link: http://www.hobokennj.org/news/city-auditor-clarifies-surplus-issues/
Get the latest  news:
Email | Text |Website | Facebook | Twitter | RSS 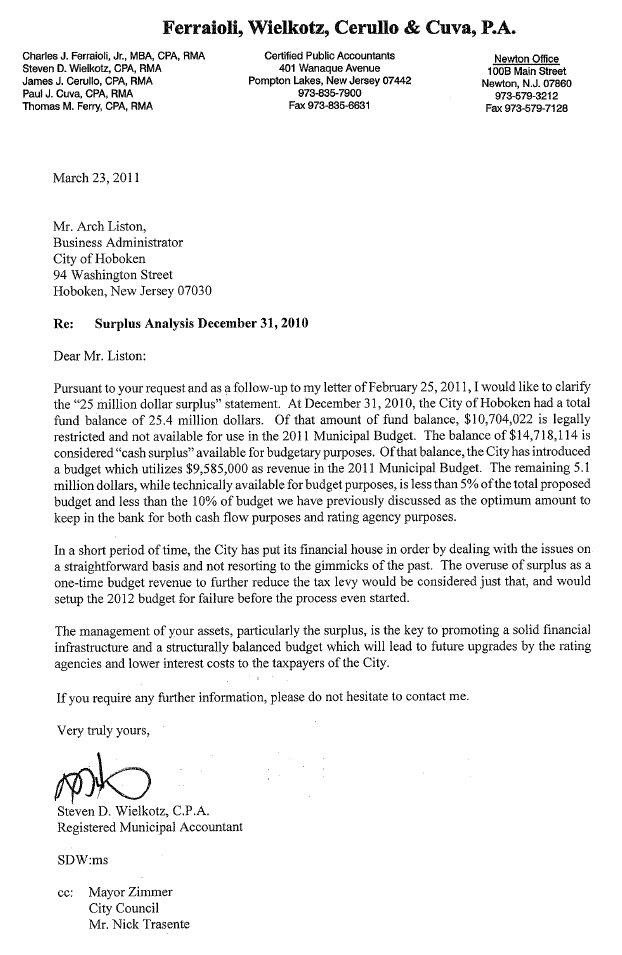