The following article is a refutation of the article appearing yesterday on Hoboken411 (see MSV story below) by Hoboken Zoning Officer Ann Holtzman:


The 411 piece this morning would actually be funny if it were not so blatantly false.  Only those who are in the wrong would say that politics played any role in my actions, unless, of course, it’s your opinion that a politician should get a pass.  I on the other hand feel they should be held to the same standard as anyone else who violations the zoning ordinance.
Meanwhile, this whole thing is running cover for Beth Mason who had neither a Zoning Compliance Certificate nor a CCO for her office which she opened last weekend, despite the fact that I sent Mason an email earlier in the week reminding her the paperwork needed to be filed, and then follow up by stopping by her office on Friday to remind them to get it done.  No application was filed with my office or documentation provided until the following Monday afternoon.
I was advised Monday morning that an attempt to end-run my office was made by former Corporation Counsel Steve Kleinman (who should know better), on the Thursday after I emailed Mason.  He called the Construction Office, demanding they come do an inspection even though no Zoning Certificate had been issued.  It is my understanding that the Construction Office did accommodate them and the inspection was done.  However, no CCO was issued until the Construction Office was in position of the Zoning Compliance Certificate on Monday.
In the “no good deed goes unpunished” column; I emailed Mason to give her an opportunity to file her paperwork, and avoid being in violation.  Her response - she sends her attack attorney’s to “deal” with City Hall.  In her paranoia, my professionalism and proactive communication was construed as an attempt at political retribution; for what?  Now, her attack dogs are going to come after me on Hoboken411 for doing my job.  I find it sad that she and her team really think everyone is out to get them.
FACT CHECK:
My position is a Civil Service position, not a political appointment.  I was hired by Director Forbes, not the Mayor, after a publicly noticed search was conducted and numerous candidates were interviewed.  I believe the Mayor may have signed off on my hiring, but I did not meet with nor was I interviewed by the Mayor.
The Kurta/Pinchevsky office was issued a Zoning Compliance Certificate four (4) days prior to their opening, as such they were operating within the requirements of the Zoning Ordinance which I administer.  I am not responsible for administering Construction Code.  The document that was later issued by the Construction Office was a Certificate of Continued Occupancy, not a Certificate of Occupancy.  No CO is required for the use of an existing commercial location unless significant alterations are made which would require the issuance of construction permits.
The Kurta/Pinchevsky office was never ordered to close.
Mr. Occhipinti’s election was on November 2nd.  By ordinance the signs should have been removed immediately following the election.  By December 6th, a full month later, they still had not been removed, and I sent him a notice to remove them.
Occhipinti was issued a ticket by my office only after he had been noticed three (3) times.  The first notice was made by both mail and email.  The second notice was delivered in person via a one-on-one conversation.  Mr. Occhipinti was noticed a third time via email the week prior to the ticket being issued on December 20th.
A day or two after the ticket was issued and mailed, a city employee friend of Mr. Occhipinti came by my office to let me know that it would be taken down by the end of the week.  Not until the ticket had been issued did they make any effort to take action.
It is the judge’s prerogative to issue a change of venue whenever he/she feels there may be the appearance of conflict.  Because Mr. Occhipinti is a sitting council person, the judge referred the case to Secaucus.
My appearance in Secaucus court, at taxpayer expense, was required as the issuing officer.  If Mr. Occhipinti had complied when noticed to do so, neither he nor I would have had to appear.
Ann Holtzman
Zoning Officer
City of Hoboken
Posted by SmartyJones at Thursday, March 24, 2011
Hoboken Zoning Officer sheds some light on the truth and the falsehoods of Hoboken411
2011-03-24T18:05:00-04:00
SmartyJones
Comments

Hoboken411 re: Mason411 piling up the lies again on zoning, people and campaigns

Hoboken411 is at it again and the boys of hate in league to all things Beth Mason have piled up a bunch of whoppers as election season heats up.  Most Hoboken readers know this already as the steady diet of lies is countered by other places but that doesn't stop Mason's minions from trying. 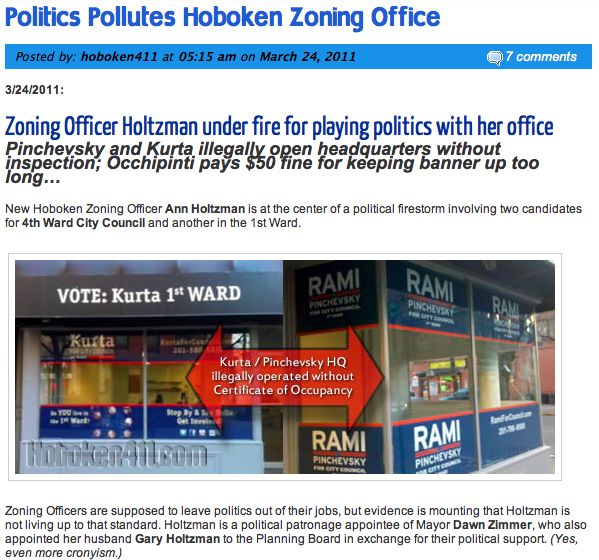 The lies in this article with no attribution whatsoever of course piled up a pile of excrement so high, the Hoboken Zoning Officer Ann Holtzman has submitted an article for publication outlining the truth on all the issues.   That article will be published on MSV shortly.  It's going to pack a wallop and bring to light not only all the lies in yesterday's Hoboken411 screed of falsehoods, it reveals more on the behavior of a certain sponsor of that website.


Gee can you guess who?

STATEMENT FROM MAYOR ZIMMER
According to several eye witness accounts, Director Sacs was attacked today by a City employee inside City Hall.  Witnesses included a Police officer and a retired Police officer.
“While I believe Director Sacs is the victim of workplace violence, I am calling for an independent 3rd party to thoroughly review this matter,” said Mayor .  “Workplace violence is an extremely serious matter and cannot be condoned. My Administration has zero tolerance for such conduct, and I urge the Council to support this internal review and codify the Ethics ordinance which seeks to address this issue.”
A claim and counterclaim have been filed by the parties, and the case will proceed through a municipal court outside of in addition to the 3rd party independent review which will begin as soon as possible. The alleged attacker has been suspended without pay pending further investigation.
Posted by SmartyJones at Thursday, March 24, 2011
Mayor issues statement on workplace violence regarding Director and employee inside City Hall
2011-03-24T14:45:00-04:00
SmartyJones
Comments

Dear friend,
Having been involved in various reform efforts since the early nineties, I have long worked for positive change in Hoboken. I now feel that the time has come for me to seek elected office so that I might accomplish that which I cannot do as a private citizen. I hope to build upon the efforts of those who have already accomplished so much toward improving our community. I want to bring fresh ideas and positive solutions to the City Council and to help keep Hoboken moving forward. To succeed in this effort, we must mount an aggressive campaign. My opponent is a four-term incumbent with a solid base of support. Our campaign will require – and has been building – an organized grassroots organization. Our campaign consists almost entirely of volunteers and will do as much as it can with a limited budget. Any help that you can provide will amplify our message by enabling us to create the mailers, flyers, and signs needed to get the word out to the First Ward voters.
Please join us at a fundraiser in support of my campaign for the First Ward Council seat.
Eric
·
·         Where:  Room 84   -   84 Washington Street
·
·         Date:  Thursday, March 24, 2011
·
·         Time:  7:00pm–9:00pm
Minimum Contribution: $50
·
Special Guests:  Mayor Dawn Zimmer, Councilman Ravinder Bhalla
Event Committee:  Ms. Ann Graham, Mr. Joseph Branco and Mr. Jahn Andersen
**** Open Bar & Hors d'oeuvres**********
·         RSVP: frances.jennings@gmail.com
·
·         Website: www.kurtaforcouncil.com
Read more »
Posted by SmartyJones at Thursday, March 24, 2011
A few words and ideas on the event tonight at Room 84 from Eric Kurta
2011-03-24T08:00:00-04:00
SmartyJones
Comments