Tom Greaney to Beth Mason: Think on personnel matters before you attack

Yesterday, an unfortunate incident occurred involving a city employee and Parking Utility Director Sacs.  There are many rumors circulating about precisely who did what and why.  The Hoboken Police Department was involved, and the City is properly conducting a third party administrative review so it can make appropriate personnel decisions.
As an experienced Human Resource professional, I understand the sensitivity involved in personnel decisions and the urgent need for the city to conduct its own investigation to determine the facts and circumstances. Investigations of these types are best done by qualified and independent third parties. Mayor Zimmer acted quickly and appropriately in moving to refer the matter to a third party investigator.
Unfortunately, Council President Mason, my opponent in the race for Second Ward City Council, chose to put out a highly politically charged press release. By doing so, she has politicized a highly sensitive personnel matter.  Quite simply, that was the opposite of how this matter should be addressed.  It is imperative that our public officials act in a thoughtful and restrained fashion when dealing with personnel matters.  Putting out a press release without knowing the facts is simply wrong.
Even during a political season, public officials must be willing to recognize that the duties of their offices take precedence over political machinations.  This is especially true when dealing with personnel matters that can have profound impacts on careers, and the management of our city.
I am deeply disappointed and disturbed that my opponent either didn't know, or didn't care, when she chose to politicize this matter. Both the citizens of Hoboken, and the parties involved, deserve better and more responsible leadership. 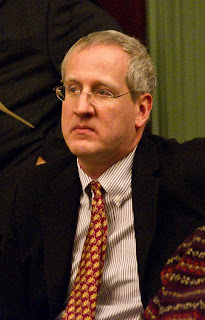 Ian Sacs, Director Transportation and Parking released this letter to the media asking for it be printed in it's entirety unedited directed at Perry Klaussen at Hoboken411. As always MSV is pleased to provide uncensored, uncontrolled views throughout the mile square.

I am writing in a personal capacity in response to your account of events involving me that were posted on your blog page yesterday, March 24, 2011. My purpose is to clear the record, not so much for my sake, but for the sake of your readers who may be angered, incited, or enraged by information that inaccurately depicts my actions in such an unprofessional manner. When taking this job, I knew that the intense politics of Hoboken would drag my efforts through the mud, and I accepted that reality willingly. But I did not sign on to anyone deliberately distorting my work and efforts as a way to encourage hate and violence among innocent an unsuspecting residents.

I have a deep compassion for my neighbors and my employees, which is why I took this job; it is painful to see them be so cruelly misled. I am deeply concerned that your politically motivated speculations and distortions of the truth lead to more such hate and violence, as it has certainly done so already on many occasions. I wholeheartedly believe that I have done nothing wrong, the charges are false. I am confident that nothing will be learned to justify, warrant or support any of the accusations.

Yesterday, while walking to work, I encountered one of our city shuttle buses at 2nd Street and Willow Avenue illegally parked, unattended, idling, with the keys hanging from the ignition. Anyone could have stolen the bus, and it was in the crosswalk creating a pedestrian safety hazard. Moreover, it was not where it should be at that time on its route. This is all entirely unacceptable and not an appropriate way to run the community shuttle bus service, for which I am responsible. Not only could the bus have been stolen, the fare box money in the box stolen, the bus taken for a joy ride by kids, or entered and vandalized, but the bus was illegally parked in the crosswalk in such a way and on such a narrow street that it severely blocked visibility and it could have caused a collision, an injury to pedestrians, or in the worst case, a fatality. Avoiding and preventing these things is exactly what I work hard to achieve each and every day, so to find one of my own vehicles in such a position is extremely alarming.

Whatever the reason the bus was abandoned, running, with the keys in the ignition, it could not remain where it was, running or not. Since it was my understanding that city employees may operate city vehicles - so long as there are no passengers and contain fewer than 16 seats – I chose to move the bus out of the crosswalk, return it to a safe location at the municipal lot two blocks away, and then investigate why the bus was abandoned in such a precarious location. The bus was returned and parked legally in the municipal lot. Since the keys were for a municipal shuttle bus, I did not realize that personal keys were attached to the key ring.

In the lobby of City Hall, on my way to document the incident, I was physically confronted and then attacked in plain view of our on-duty security guard, an on-duty police officer, as well as several other employees and citizens waiting for court. As the security guard and police officer removed the attacker from me, I then heard him state that there were “personal” keys attached to the ring in addition to the municipal shuttle bus keys. I immediately had another individual return the personal portion of the key ring. That alone is the so-called “theft” of which I am accused.

I am admittedly no tough guy. I am no bully. I am no aggressor, and I did not initiate any violence. I maintain a light, friendly, professional rapport with my staff. I am quite successful and content using our laws and rules of employment to get the performance I expect, and all my staff know this. There was no “lighting into”, “threats”, “public berating”, or “verbal firing” as you incorrectly wrote. There was no “throwdown” or “fight” as you incorrectly wrote. I did not “poke” or say “You're finished”, as you incorrectly wrote. I was simply attacked for doing my job as a Director. You should understand that your words, Mr. Klaussen, can incite much unnecessary anger and hate when carelessly chosen.

Although I am stern to the point that I expect each employee to earn their pay (and for that I find no harm), I nonetheless treat all of my employees with respect and empathy, and I make every effort to avoid personnel actions that effect their permanent record if at all possible. It is unfair to characterize me as being “hot tempered”, or to suggest that I have a “strained” relationship with my employees, unless you think that expecting a reasonable level of performance and productivity for one's pay makes a relationship strained.

Given your track record, I am doubtful you would act in such an objective and balanced manner, but since your blog's slogan is “Keeping Hoboken Honest”, I am respectfully requesting that you post this response in its entirety, with no edits or redactions. That is what a legitimate news source would do. I will send this response to all local news sites as well so that they can choose to participate in keeping you honest. I further challenge you, in the name of “Keeping Hoboken Honest”, and in the name of the innocent people who read your blog expecting unbiased news, to keep yourself, a self-proclaimed “credentialed journalist”, honest as well.

Thank you for your time and consideration.

Talking Ed Note: This media release went out to all local outlets including of course Hoboken411.  MSV wishes to note the Hoboken Reporter has joined in posting the comments outside of the end paragraph posted here.  The Jersey Journal printed limited comment in its story.
Posted by SmartyJones at Friday, March 25, 2011
Ian Sacs responds to false account on Hoboken411
2011-03-25T16:41:00-04:00
SmartyJones
Comments

Turned into a fun event with lots of discussion, laughter and high energy.

If you care about the future and the soul of Hoboken, it's time for you to be heard. You decide how but you will be surprised just how both normal and cool the people running on the reform coalition truly are.

Please join us on Sunday, March 27th at 1pm in Columbus Park for our Annual Kids First picture!

The Kids First 2011 Team will be there and there will be snacks and drinks for the children. It will be a great time to catch up with old friends and meet some new ones.

We truly appreciate all the community support over the years and are very excited about the accomplishments we have achieved this past year. The Kids First 2011 team needs your continued support to keep the progress going!

Please pass this along to your friends....
Posted by SmartyJones at Friday, March 25, 2011