Grist for the Mill: Mike Russo out in Finance

A source, no where near the quality of Grafix Avenger's Deep Uvula says Mike Russo will resign as chair of the budget and finance committee. If he wants to make it voluntary, he'll need to move quick. Yesterday his two year marriage to Councilwoman Beth Mason ended when after more than a week of sitting quietly and uttering not a word on the revelations of his sit down with FBI informant Solomon Dwek accepting his offer of multiple illicit payments, she threw him under the Hop.

On the surveillance tapes, Russo voiced support for Beth Mason for mayor but said his support came with a price - his selection of all three council candidates on the slate and control of six votes on the nine member council.

Six votes he explained would allow him to approve development projects right in the City Council without any zoning board approval. Based on the slate of candidates many who suspected the deal felt Mike Russo was being forthright, as when he also described himself and Beth Mason as very pro-development.

Will he get the chance to announce his resignation from the subcommittee before a vote is held appears to be the only real question?

Mayor Zimmer: - Russo "incapable" to remain on City Council after betrayal of the people

Open Letter to  Residents from Mayor Zimmer Regarding Public Trust
Our City has been through some painful times. Regrettably the pain continues with the disturbing revelations regarding Councilman ’s meeting with Solomon Dwek in 2009 during the mayoral election.
I want to say up front that I truly believe that only by facing the history of ’s corruption and the potential for future corruption, can we as a City heal from the past, build back the public’s trust, and prevent future corruption.
For this reason, when the authors of the “Jersey Sting” recently came to  for a book signing, I made a point of meeting them face to face. I told them directly how difficult this has been for our City and that I believe the people of  need to know all of the facts. “Is there any way that you can work with the FBI to release all possible tapes that may exist related to ?” I asked directly.
As you know, the tapes of Councilman Russo’s meeting with Solomon Dwek were recently published by the Star-Ledger. In the interest of transparency, I followed up and had professional transcripts of the tapes completed to ensure that there would be no misunderstanding as to what was discussed.
The transcript has been posted to the City’s website.
The text of the conversation speaks for itself. From my standpoint, the question is not, did Councilman Russo take a bribe or not? I think the questions for the people of to ask are: Did Councilman Russo’s conversations with Solomon Dwek about development and campaign donations and pay to play break the people’s trust? Has the Councilman’s decision to remain quiet about his meeting with Solomon Dwek at the time when this story was unfolding in 2009 broken the people’s trust? Has his decision to blatantly lie to the Hoboken Reporter about having disclosed the information at the time broken the people’s trust? When he says, this is what “fundraising meetings sound like,” is he saying that he has tried to “sell” development access in exchange for campaign donations to other developers and therefore broken the people’s trust?
These are all questions that I hope the people of  will take seriously as together we review how to prevent corruption in our City.
What I also find disturbing is that Councilman Russo publicly positions himself as being for “balanced development” and “open space,” while in private Councilman Russo describes himself as “very pro development.”
Even more disturbing is how he describes himself as someone who has partnered with Councilwoman Mason to “take control of the City” with a “six vote majority.”
residents should understand that with a “six vote majority” the Councilman could absolutely “control” development since the City Council is the redevelopment agency and ultimately decides on crucial development issues.
As our City works to bring balanced development to the NJ Transit site in the South and other possible development projects in the Southwest, the Western Edge, the Northwest and the Northeast, Hoboken residents need to know that they have a City Council and a Mayor they can trust to carefully take on this very important responsibility. At the end of the day, the future development of our town rests with nine individual Council members and the Mayor. We’ve got a wonderful City, and the public deserves to know that they can trust their elected officials to carefully safeguard the future of our town.
As I reviewed the tapes and the transcripts, I thought about how we have to work every single day to be ethical. As I explained to employees about three weeks ago when the FBI came and conducted mandatory ethics training for all of us, no one can “say” they are ethical; they have to work hard to behave ethically every day. The way a person behaves when they believe no one is watching or no one will know is when the person’s ethics are revealed.
Councilman Russo has revealed his true self to . His actions speak much louder than his words. Based on my review of the surveillance tapes and the transcripts, I believe there is no doubt that he has broken the people’s trust and is incapable of maintaining his position as Finance Chair, Commissioner on the Housing Authority, or his position as 3rd Ward Councilman
I recognize his continued tenure as Councilman may ultimately be decided by 3rd Ward residents, however I call on the City Council President to exercise her authority to remove the Councilman as Finance Chair and the City Council to exercise their authority to remove him as a Commissioner on the Housing Authority.
Right now I am headed into a kick-off meeting with redevelopment planners Roberts, Todd & Wallace to start planning for balanced development on the NJ Transit site, and I want to assure everyone that I fully recognize that my actions matter much more than my words.
Thank you for listening.
Mayor
Link: http://www.hobokennj.org/news/open-letter-to-hoboken-residents-from-mayor-zimmer-regarding-public-trust/
Posted by SmartyJones at Wednesday, April 06, 2011
Mayor Zimmer: - Russo "incapable" to remain on City Council after betrayal of the people
2011-04-06T14:40:00-04:00
SmartyJones
Comments

Word of the protest today at City Hall is getting out and about and Hoboken Revolt the group who brought us the party there last time in 2009 is on board for the second installment, "We're not done with Hoboken corruption."


Guess you just can't say a job is done until it's actually done.  Well Councilman Mike Russo kept a lid on it for two years just about, but when word got out, it really got out.

So 6:00 is showtime and there's something special also in the works for the folks.

Check in at City Hall at 6:00 and get a taste of what it's like when Hoboken fights back!


Talking Ed Note:  The authors of 'The Jersey Sting,' also love Hoboken now so much word is they will be coming back.  MSV will let you know well in advance and this time it will be on a weekend with a book signing and a forum for Questions and Answers.

Beth Mason's divorce papers announced in her statement yesterday to the Russo clan may be better late than never but the love for the Hoboken sellout is still going strong at Mason411.  The ghostwriting minion who despises nothing more than a mayor working for all of Hoboken without him working on the second floor is frothing at the mouth over the bogeyman of the past and repeating the same accusations over and over with of course not one named witness let alone a quote.

Underneath the utter vapidity, you can smell reality is beginning to settle in and it's not good for the uber smearing pro-Mason vendetta is our job 24x7 website.  You can just feel the bitterness. 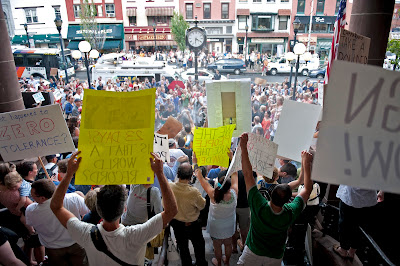