While many have already seen the Mike Russo tapes showing his actions with Solomon Dwek, others have not. To make it easier to capture the spirit of the moment, MSV has encapsulated them into three short clips of Mike Russo's  greatest hits.


This way you can share and relive the moments as you wish. Note, MSV does not say these are Mike Russo's words. These are not mere words and the 3rd ward councilman was not meeting Solomon Dwek to discuss mere words over lunch.  He was there to do business.  And the type of business he was conducting hardly appeared to be new, even though Mike Russo was meeting someone new for the very first time in the person of Solomon Dwek.


Here's the third of the three short clips where Mike Russo explains the political realities in Hoboken of what's expected of a Hoboken Housing commissioner he backs. One member of the public in the City Council meeting after watching this noted HHA residents are easily exploited under such arrangements. In Mike Russo's value system, "I do for you, you do for me."


The only problem: Mike Russo wants to keep hanging on to the HHA seat and exploit Hoboken's most vulnerable. He worked on Tim Occhipinti's campaign in November and he will almost certainly be using this HHA leverage again repeating the record setting turnout of paper ballots (500 submitted!) out of the HHA at $40 a pop when Tim Occhipinti faces the election on May 10th.


Mike Russo explains how things work in the HHA. Now you know why they want to control those HHA seats so much. The conversation with Tim Occhipinti where Mike told him, "I do for you, you do for me," was quite evident in the last City Council meeting.


Far worse, the party line prepared by the Council of No (including Councilman Nino Giacchi) of this Russo corruption problem, their coordinated complaint of "political season," and let's just allow the 3rd ward voters decide being the indifferent refrain.


There was no real action urged from the Russo-Mason cabal including council members Terry Castellano, Tim Occhipinti and Nino Giacchi. They put up a toothless resolution recklessly pointing fingers everywhere and anonymously anywhere other than Mike Russo to counter the censure version publicized before the meeting by Councilwoman Carol Marsh.


The Council of No let by Mike Russo and Beth Mason along with council members Terry Castellano, Nino Giacchi and Tim Occhipinti were having none of that reasonableness.  They choose to block the introduction of Councilwoman Marsh's resolution altogether, and push a transparently watered down version refusing to act strictly on Mike Russo's true nature revealed in the one hour surveillance tapes.  That should tell you the contempt they hold the public at large and Hoboken, old, new and in-between.


None of the staged attacks on everyone other than Mike Russo was an accident.

On May 10th, the Hoboken public gets to weigh in on the matter.

MSV attended the BoE forum last week and was disappointed to discover there would be no video available of the event to the public.  Not prepared for such a situation, Da Horsey galloped down and made several clips to compliment the effort of our bigger brother at The Hoboken Journal.


Additional clips of the BoE Forum at the jump: 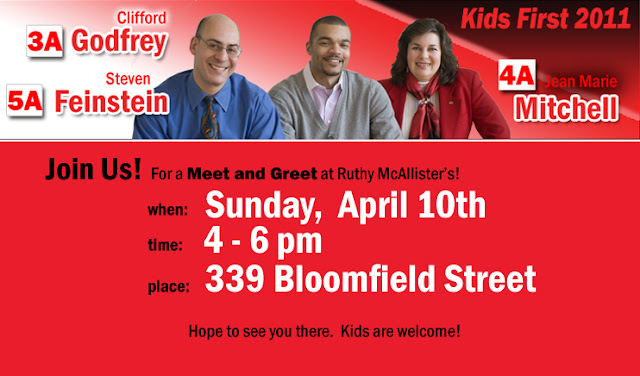 Hoboken voters will have the opportunity to pose questions and hear directly from the candidates vying for the six City Council ward seats in the May 10 election. Two moderated forums will be conducted by the Hoboken Quality of Life Coalition and People for Open Government, and hosted by The Parish of Our Lady of Grace and St. Joseph.

The first forum will feature candidates for the four wards with just one incumbent and one challenger (1st, 3rd, 4th and 6th) on Tuesday, April 12, from 7:30 p.m. to 9:30 p.m. in the auditorium of the school at Our Lady of Grace, at the corner of Willow Avenue and Fifth St. The second will feature candidates for the two wards (2nd and 5th) with an incumbent and three challengers, on Wednesday, April 13, from 7:30 – 9:30 p.m. in the same location. All candidates will be invited to participate.

At each event, written questions will be solicited from the audience and screened by members of QLC and POG for clarity, general interest and absence of partisanship. Both events will be moderated by longtime Hoboken resident Bob Bowdon, a veteran TV reporter, anchorman and documentary filmmaker. Bowdon’s on-camera reporting encompasses six years with Bloomberg News and he is an op-ed contributor to the Huffington Post website.


QLC and POG are nonprofit, nonpartisan citizen organizations that have been active in Hoboken during the last decade and have organized previous candidates’ forums. Our Lady of Grace Church is joining in the sponsorship of these forums in order to make information available about the candidates in this important May election and as a means to urge citizens throughout the city to exercise their right to vote.


QLC (www.qlchoboken.org) actively supported POG’s initiatives and has a long history of working with other groups concerned about clean air and water, flooding, the density of development, the need for open space, the lack of parking and anything that threatens a good and healthy living environment in this densely populated city. QLC is committed to preserving Hoboken’s unique streetscape and the old and historic buildings that make Hoboken a special place. In March 2008, QLC established the Committee for a Green Hoboken, which actively advocates for green initiatives in local government and hosts education series for residents and businesses in greener building and lifestyle choices.


POG (www.hobokenpog.org) is a nonpartisan, political committee dedicated to promotion of open, accountable and transparent municipal government; active participation of Hoboken residents in municipal affairs; and curbing the undue influence of campaign contributions on public policy. POG successfully advocated for passage of anti-pay-to-play legislation as well as ordinances requiring electronic access to local government documents. It produced a package of ordinances that ultimately were adopted as city law that required competitively negotiated professional contracts and developer contribution disclosures.