How does corruption play out on the city's May 10th council races?

Since the Mike Russo FBI surveillance tapes have come out, the question since the last Council meeting on people's minds following the election is how does this play out?

At the last City Council meeting, many people concerned about their links to Councilman Mike Russo were ready to immediately move ahead, some with attacks on others, even suggesting we should be "outraged," by unknown facts with other people doing unknown things while pointing at everyone and anyone even the Governor. You could hand them a mirror with Mike Russo's arm around their shoulder and they still couldn't tell you who the bad guy in the picture is. (The deranged will say it's those not pictured in Reform)

As the ward elections are coming together, reform has a big issue. The old guard and their adherents whether political operatives, benefactors or business interests all agree on one thing: let's move on. That's not an accident, that's business and what the environment they are comfortable operating in and profiting.


Then there are others fearful of the damage politically to themselves and the Old Guard being taken down. They argue about privacy rights and the constitutional infringements on Mike Russo even AFTER the bribe video came out. It's a moral bankruptcy driven by much faulty thinking including their cult of personality support for certain candidates.

Reform however has a different vision and says this latest example must be highlighted and emphasized and following the mayor's lead is the driving differential between the two sides. That the delineation and division begins and starts with the importance of corruption is an obvious one. But does everyone get it?

The loose coalition of reform candidates each run their own campaign and message when they engage their specific wards. However, what's clear is that each candidate has their own local list of issues and some are emphasizing the corruption issue as part of it while others have not.

How this sorts out in each ward is interesting. The ward with the biggest central issue of corruption is the 3rd and Greg Lincoln has been clearcut and focused from the beginning. Even before the scandal of the bribe tapes came out, his message was pointed and direct on the matter. In the 1st ward, Eric Kurta is highlighting it when possible and has a laundry list to point to over decades. In the 2nd ward, Tom Greaney made a point of linking the Russo-Mason alliance as part of the endemic corruption inside and outside the chamber in his City Council address at the last meeting. How much further he highlights it will be a dynamic to watch.

In the fourth ward, Rami Pinchevsky has begun to point out the problems in Tim Occhipinti's obtaining the city council seat in the debates. But is it consistently being communicated to residents? In the fifth ward, Councilman Peter Cunningham has divided his work on the council with his specific concern on corruption and hammering at links to his opponents being in bed with the Russo-Mason faction. In the sixth ward, Jen Giattino is highlighting many local issues and more oblique on her opponent's connection to the "old boys" club. The sixth ward has a strong family dynamic working in her favor but she has been at times pointedly critical of the lack of separation from Councilman Mike Russo making it clear she will not be a party to him and his operating cabal.

Between now and May 10th a battle is going to rage and simmer beneath the surface. The Old Guard faction with Terry Castellano, Beth Mason, Mike Russo, Tim Occhipinti, and Nino Giacchi is going to fight to get votes out from their base that doesn't care about corruption and is fine with co-existing as long as they get something out of it. Their challenge will be to distract in any shape or form possible other potential voters from focusing on the issue as those voters will be moving away from them individually and collectively.

The dynamics of this will be more clear as May 10th approaches. Keep a keen eye as you are going to see an unusually high number of distractions being tested out on the Hoboken voting populace between now and May 10th.

Yes, it won't be pretty but it will be telling how far they will go to keep corruption out of the public eye.

From the desk of Peter Cunningham:

The Council Elections are now only three weeks away.  While we are all hard at work to win this election, we are looking for additional volunteers that can canvass our neighborhoods to identify our votes.  In addition, on Election Day, we are looking for Challengers to sit at our 5th Ward polling locations (2 to 4 hour time frames) to monitor voting activity and track the vote count.

These are both very critical tasks that will help us carry the day on May 10th.  For Challenging, if you THINK you might have time, we need to know very soon so we can submit your name to the County by next Tuesday 26th.

Please advise!!  For those that have contributed time and money, many thanks to you all.  For those that have not, I am making a personal plea.  Remember, our victory will ensure that we continue to lead the fight against CORRUPTION in Hoboken and keep Hoboken moving in the right direction.  Corruption has destroyed our finances and development opportunities.  All of these important issues which we are addressing head on are at stake and all three of my opponents are tied to old Hoboken politics and the corruption that still exists today.

Let's not turn back the clock, please get involved today!
-- 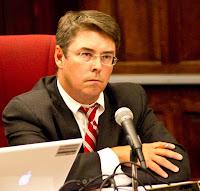