Councilman Cunningham: Get behind Kids First and vote

From the desk of Peter Cunningham:

It is with pleasure and confidence that I support the Kids First slate
of candidates of Jean Marie Mitchell, Clifford Godfrey and Steve
Feinstein.  While they have had their challenges, just like the City
has, Kids First continues to make progress.

These are highlights of their fabulous achievements that have helped
provide exceptional choices for all our children whether they are in
Charter Schools, traditional Public Schools or Private.  The Kids
First success has also helped lead the reform movement in Hoboken.
Their continued success leads to better value for your tax dollars,
improved property values and an overall posititve impact on our
quality of life.

Let's work together to make it happen by supporting 3A, 4A and 5A.

More information on this great team can be found at www.kidsfirsthoboken.com.


Sad day for the Franciscan Sisters of the Poor

In 1863 the Catholic Franciscan Sisters of the poor opened a community hospital in Hoboken to serve the poor and the less fortunate.  That was over 148 years ago and in 2008 the Catholic organization managing the hospital transferred the hospitals ownership over to the city, at no cost, with the understanding that the city of Hoboken was going to continue its ministry of serving the poor and disadvantaged.
It is obvious that the Catholic organization that owned the hospital could have sold the hospital for 90 million dollars at that time, the land value plus all of the hospital’s equipment is probably worth more than 90 million.  And the reason that Hoboken received this hospital was to maintain its commitment and the covenant of providing health services to those who are less fortunate.
Now, Peter Cunningham and the Mayor Zimmer team have sold the hospital to a for profit company without any regard to the original mission of providing health services for those in need.  Selling a community hospital that services our community when at the same time bonding 20 million dollars to buy a property, originally a chemical plant, to build a public park.
This, to me is a , sad day in the history of our city.
Leonard Luizzi
Candidate for 5th Ward Councilman
Posted by SmartyJones at Tuesday, April 26, 2011
5th ward council candidate Leonard Luizzi: A Sad Day for Hoboken
2011-04-26T20:49:00-04:00
SmartyJones
Comments

Although Councilwoman Beth Mason and the 'majority' in the City Council have the complete budget on their table including an additional 5% tax cut if they ever get around to approving it; she's sent out a mailer with some intriguing tax options.

Beth Mason in her latest 2nd ward mailer is promising a 20% tax cut.  Add in the 5% cut from late last year and that total a whopping 30%.   Wow, how does she do it?  Well she doesn't answer that obvious question.
Being that she opposed the police reorganization saving the city $2.5 annually plus more than a half million in benefits this year, it's baffling where she would go to identify such savings.  More than half Hoboken's budget is in public safety. 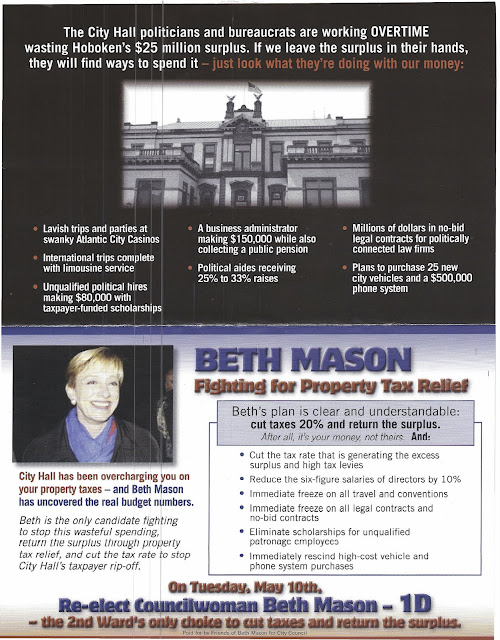 Talking Ed Note: There's a lot of other filler all off kilter and part of the continuation of taking pot shots from every which angle at everyone who is anyone working in service to Hoboken under Mayor Zimmer.  The mailer reiterates her call to reduce Directors salaries yet again, something she said at the last Council meeting she's had her eyes on "for a while."
Of course she fails to say as she did in City Council they were already reduced to $103,000 under the mayor.  Now she wants to whack them down to as low as $70,000.  At the council meeting Councilwoman Carol Marsh remarked how strange it would be to reduce Directors salaries a second time in short order when they have dozens of people reporting to them.
Hey give the woman an A for chutzpah.  Beth Mason has it in spades.  Hoboken would settle for her just filing her required ELEC report on her campaign financial expenditures this year.
Where is Beth Mason's ELEC?  She's apparently funding re: wheeling money all over town in a one man gang operation to take control of Hoboken and relaunch her political ambitions for Hoboken and beyond.
Has anyone got a pulse on POG (People for Open Government)?  Last seen they were running wheeling interference on behalf of Beth Mason and threatening to come up with a wheeling ordinance that would suit the Queen of Transparency.
Some day.
At the last city council meeting, Councilman Nino Giacchi raised some eyebrows endorsing unwritten and unknown POG anti-wheeling proposals as a way to oppose even introducing the existing legislation sponsored by Councilman Peter Cunningham.  The POG President was then invited to speak on wheeling against the council rules on first introduction.  This even though she has no ordinance to present.
How very odd.
Posted by SmartyJones at Tuesday, April 26, 2011
New Beth Mason mailer promises 20% tax cut
2011-04-26T16:45:00-04:00
SmartyJones
Comments

Russo insider: "We have Beth’s money to make it all happen"

That gnarly bit of condescending flesh, Deep Uvula is back puking its little guts up on Grafix Avenger and there's some twisted turns and takes on everything from the BoE race tomorrow to the council races on May 10th.

DU's take on the Board of Ed election and the tsunami of paper ballots confirming the 500 plus paper ballot assault on behalf of the Frank Raia - Carmelo Garcia led slate:

The absentees weren’t supposed to hit so early. Minor screw up. The BOE was supposed to be a surprise attack. No way does Kids First recover from the lead.


In the 6th ward, Deep Uvula ridicules "that Jen girl," saying it's beneath Councilman Nino Giacchi to speak on such common place Hoboken election style tactics:


The Calicchio kid just got a little enthusiastic. Big deal. Nino is not even going to dignify this nonsense with a response.


On the strategic use of Beth Mason's wheeling (apparently it will be wheeled everywhere setting her new unethical records across town), this conclusion:


Funny, she (Mason) is right at home. She could care less what is done with her money, as long as she gets the win in the 2nd.

Yesterday's latest video surveillance tape showing crime in progress produced the loudest sound of silence from the council 'majority' one will ever hear.  No cantankerous grandstanding, no multiple consultant approved email blast, no press conference called and held on the street, no chasing down local reporters to get quoted and no statement even acknowledging what occurred.

There hasn't even been a generic bland comment describing the heist as an "anomaly" from Old Guard political operative and Jersey City interloper spokesman David Cruz who appears on the ELEC reports of the Mason-Russo team for $250 a week each.

Councilwoman Beth Mason and Councilman Nino Giacchi have been utterly silent and did not provide even a response to a request for generic comment yesterday.  Forget about an interview, your taxpayer paid representatives aren't concerned with such trivialities as the right of the governed, there's power to be wielded and protected.

Beth Mason who has been known to attack an empty council colleagues chair at the drop of a hat to engender some press with wild charges, even when said colleague is away attending a family funeral can't seem to muster one sentence from among her coterie of paid consultants.

Councilman Nino Giacchi has also offered nothing to a business residing in his own ward.  Perhaps he views it as just another instance of "political season," and he prefers as he said on the resolution concerning council colleague Mike Russo's corruption to "focus on the issues" of the sixth ward.  His laser like focus is so penetrating, if people are still awaiting comment on the criminality of his colleague Peter Cammarano, they may have missed it when they blinked.


Talking Ed Note: Well Hoboken should note we can hear what this council majority is saying.  Let's see how long they think that silence can last.  If the Reform candidates are sitting by to see for a short time how this develops that's fine, but they shouldn't wait too long.  Keep the powder dry.

So far only the Jersey Journal took a stab at the story, even if incomplete.  Let's see who will be following up to hold the taxpayer paid elected officials to account.
Posted by SmartyJones at Tuesday, April 26, 2011
Latest crime video produces radio silence on the Mason-Russo front
2011-04-26T07:30:00-04:00
SmartyJones
Comments