From the desk of Franz Paetzold

My name is Franz Paetzold. I am running for Hoboken City Council, 2nd Ward.

I am independent, not connected to any town politician and not accepting assistance from anyone if it comes with the expectation of political pay-back.

Throughout my campaign I have focused on the issues that affect our town. Among other things, I believe we need to maintain a 5% budget surplus; use benchmarking towards reducing personnel costs; reform our elections process; consider all options to resolve our parking problems; have the Council make responsible development decisions; and take a serious look at our rent control problems.

I may criticize other candidates; however, I have never slung mud or called people names. I have not used blog sites to launch character assassinations. And I have always respected the voice of political opposition.

In short, I have run a campaign without hurting anyone. I have talked about the issues in a way that is honest, direct and devoid of ulterior motive. And I have met many people who would like to see good change in City Hall.

Join me on May 10th, and together we can take the first step towards taking back our town.

The landmark 1978 album on Chrysalis records is a masterpiece of time and era. Sadly, Da Horsey did not get there in time and was disappointed to miss some of the well known cuts on the album.  The heavy fat sound of the lead guitarist was probably sweet on "One Way or Another."

Somehow it didn't seem right that the Pretty Babies didn't play "Pretty Baby." Based on the crowd reaction, they could have played longer too.  Still they brought lots of attitude good chops and some actual entertaining banter from lead singer Tammy Faye Starlite.

MSV found the lead ax babe and drummer to be especially dynamic. It was a rocking good time and they are definitely worth seeing.
Posted by SmartyJones at Monday, May 02, 2011
Pretty Babies rocking Blondie's hits at Hoboken Arts & Music Festival
2011-05-02T20:36:00-04:00
SmartyJones
Comments 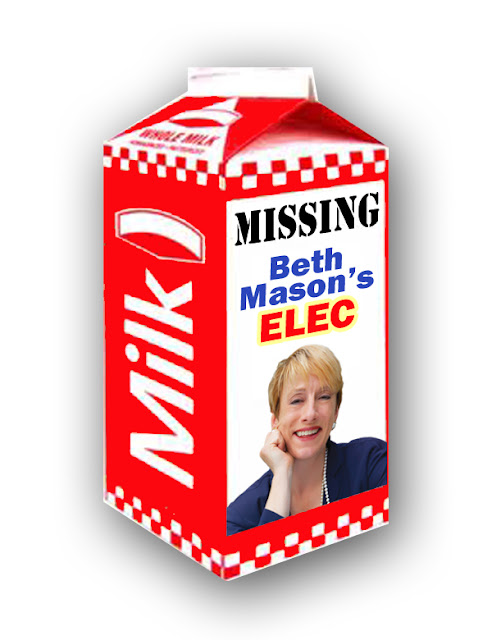 Wonder how much Beth Mason's spending on her campaign and others?  No figures are available but her self-announced pride in money laundering to Tim Occhipinti of $13,000 and perhaps as much as $15-20,000 means it's going to be a mighty sum.  (Legal contributions from individuals is $2,600 maximum but Mason used a loophole to route far more via her 2007 campaign committee.)


MSV requested comment for publication on the matter of Beth Mason not complying with the law and filing any financial data with NJ ELEC from POG (People for Open Govenment).  In a series of emails yesterday current President Alice Crozier said time was needed to study them later this week, then later emailed saying "instant comment," was not possible.


When more time was offered with a question as to when a comment would be possible, an email stated a terse flat out rejection, "You do your thing, I do mine."


Finally, here's a statement on the influence of money from POG's own mission statement:

That in a nutshell is the exact problem Hoboken has now with Beth Mason as she flouts the law and is out of compliance with both the State and City of Hoboken reporting requirement on her expenditures not only in the 2nd ward but all over town.


An equal concern is how much of her money will be used in vote-by-mail schemes.

Talking Ed Note:  Hold up a blank piece of paper in front of you and ask, how long do you need to study it? 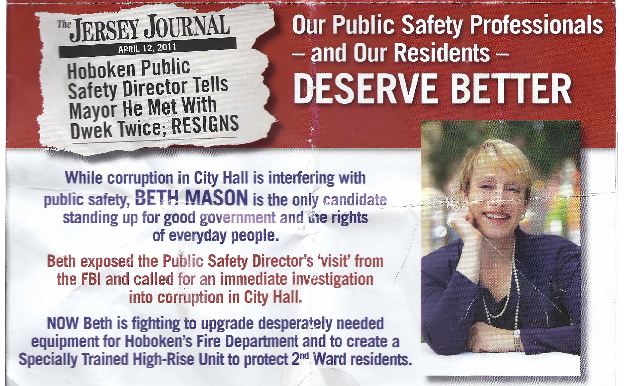 Councilwoman Beth Mason's latest mailer points to a scorched earth campaign as she turns her sights from her 2nd ward opponent Tom Greaney and fixes her guns oddly on "corruption in City Hall."

The mailer clearly geared to the low information voter or even lowest information unknowing voter makes a mockery of Mason's inability to act decisively with any strong ethical bearing on Councilman Mike Russo's conduct in the Solomon Dwek meeting turning the tables and guns on the mayor's office on a former Cammarano staffer who was pushed into resigning.

While most of these voters are unaware of the irony, those that do and remember Beth Mason did not ask for the resignation of her political ally while she has done so against others for far less will not be viewing her any more kindly.

Clearly the Beth Mason campaign continues to surrender votes from 2nd ward residents who have a inkling of what's going on and her lack of corruption oversight regarding a political ally in the hopes it will be offset with other voters who will show up on election day.

That's a strategy though that can backfire and in a big way. The people who will be angered at this will speak to their friends and neighbors while those who find any appeal from her constant bombardment of mailers may just ignore her appeal for their vote entirely.

The Mason campaign is no doubt aware of this and has decided there's no other way. She deployed a similar approach citywide in the 2009 mayoral race and we saw how that worked out.

But what else can she do? Clearly her approval numbers have fallen precipitously with her popularity in the 2nd ward (and citywide) in a tailspin after a series of blunders and political missteps showing residents inside and outside the 2nd ward the most craven political ambitions.

Having been in a defensive posture from her close alliance with the Russo clan, how does Beth Mason change the discussion on the corruption of her ally? By going on the attack and muddying the waters is clearly the choice.

Is Beth Mason making a mistake to ignore her 2nd ward opponent and begin running against City Hall and the mayor? She's been criticized by people close to her for doing exactly that and not caring about being the 2nd ward council person.

Talking Ed Note: The self-proclaimed Queen of Transparency has been anything but in this election campaign. Her 29 day ELEC report is way past due raising alarm bells about her splashing around monies all over town far beyond any ethical limit of $2,600 per campaign.

Political operative Matt Calicchio seen on video swiping 6th ward candidate Jen Giattino's campaign signs from a local business in broad daylight was repeatedly seen going in and out of her campaign office in recent days.

While 6th ward councilman Nino Giacchi denied knowing Calicchio, stating he is not authorized to work on his campaign, it's obvious work is being done out of Beth Mason's campaign location on Washington St. on behalf of others who are aligned with her including the Russo family.

How much money is being spread around through Beth Mason "authorized" checkbooks? Of the two known in her name and her campaign committee are other funds being routed to political operatives and consultants through third party arrangements such as the Cratos Group?

Last fall, the head of that political consulting firm sent Tim Occhipinti $875 while in the employ of Beth Mason. The question of why that organization would be giving money away to political candidates is a glaring problem leading to clear suspicion of money laundering.

Beth Mason's shell corporation has a connection to the same Lyndhurst, NJ location as the Cratos Group. Is this just one example of numerous transactions? Without an ELEC report from Beth Mason, there's nothing but more questions on her ethical behavior of expenditures in this campaign.

Is anyone going to question Beth Mason on any of this? Or is she going to get a free ride and break all the rules right into election day? It's pretty good to be the Queen of Transparency when no one asks you the obvious as you sit atop your glass house.

Oh and where's POG on this?
Talking Ed Note 2: Mason411 is now running her cameraman's clip of the authors of "The Jersey Sting," to defend her close ally Mike Russo.

The limited video taken by Beth Mason's hired cameraman fails to show the complete discussion regarding the criminality for the government to pursue all conspiracy cases in the Operation Bid Rig case.

In a comparative moment, one of the authors says Mike Russo is a "good guy," for not taking the money in the end after agreeing to accept a series of payments to his campaign committee "Russo for Hoboken," starting with a $5,000 payment.

Later the discussion would define that "good" along the lines of what the government chooses to pursue as part of an open and shut case. The equivalent of most of the cases shows the final transaction of money is what prosecutors looked to do in order to maximize their success.

Of course Hoboken411 and its ghostwriting minion in fealty to Councilwoman Beth Mason isn't going to let you see the video of those remarks. Here it is:

Here Josh Margolin discusses the line of proof used by the FBI in deciding prosecution among dozens of NJ politicians. It's noted quid pro quo, re: conspiracy to commit the crime itself is sufficient in proving a case (and often is). He goes beyond mention of the legal statute admitting he's not a lawyer and the money is problematic in cases where even tables at political dinners are involved, an area agreeably not illegal.

No one has tried to say Mike Russo agreeing to accept $5,000 is legal except for his rank apologists. The legal limit for a donation from an individual is $2,600, almost half. Selling development deals for $5,000 or more is clearly illegal. Doing so with a person you meet for the very first time speaks for itself.

No one would say that agreeing to pay someone money to kill their spouse and not making payment absolves them of guilt.

Unless of course you are Hoboken411's ghostwriting minion trying to save Beth Mason's corrosive connection to Mike Russo. Then hey, it's all good.

Sidebar: Hoboken411 also steps on the pay-to-play laws noting inaccurately one of the authors says they don't work. But the reason they say start from scratch is not because it's not an issue, but concern that there are ways to get around it and defeat the intent of the law.

A perfect example is Beth Mason using her 2007 campaign committee to surpass the individual contribution limit of $2600 and pump in thousands and thousands of dollars more as she did for Tim Occhipinti last November. In doing so, she bought the "swing" vote to make herself City Council President.

With Beth Mason's long overdue ELEC report showing her campaign expenditures MIA, what Mason411 is foreshadowing here is some record setting huge payouts all over Hoboken.

We don't know even part of that truth because Beth Mason is violating ELEC and blatantly so.

MSV has invited the POG President to comment on this so far being told more time is needed to review the non-existent ELEC report.

More on that later.

If Beth Mason is for good government,

WHERE IS HER ELEC REPORT?

HOW MUCH MONEY IS MASON LAUNDERING?