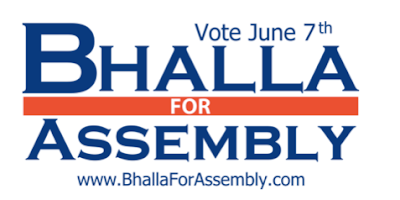 BHALLA HOSTS CAMPAIGN KICKOFF TUES, MAY 24th AT HUDSON TAVERN
On Tuesday, Ravi Bhalla will host a special campaign kick-off event at Hoboken's own Hudson Tavern at 51 14th Street at 6:30PM. Supporters from all over Hudson County will be joining with the Assembly hopeful to show support, share stories from the field, and listen to Bhalla outline his reasons for running.
The assembly campaign in the recently redrawn 33rd Legislative District has been mostly quiet this year, but as anyone who has been near Bhalla's First St headquarters will attest, the pace has picked up dramatically. “I have seen tons of people coming in and out of the place this entire week. Today I counted no less than 2 dozen enter, then leave with Bhalla t-shirts and clipboards,” said Jennifer Rock.
Momentum for Ravi Bhalla has increased significantly in the past few weeks. As the Hudson County Democratic Organization once again battles against itself during the Democratic Primary, many view Ravi Bhalla's candidacy as a chance to significantly boost the opportunity of Democratic Committee candidates running off the line. “You better believe that when I go knock on doors and talk to voters that I'm talking about Ravi Bhalla too. He's already been knocking on doors in this neighborhood, so I'm hoping to build both of our name recognition,” said committee candidate Joe Branco.
Last year, Ravi Bhalla led a group of community activists to reform the Hoboken Democratic Committee by electing a new majority and wrestling control away from the Russo clan. Despite those efforts, the Hudson County Democratic Organization gave the official party line for this year's election to the Russo ticket anyway. This power grab has motivated Hoboken's reform community to take a stand for themselves and for Ravi Bhalla.
These Democratic Committee candidates, running under the banner “Democrats for Honest Government,” have more motivation than their own candidacy. As a City Councilman in Hoboken, Ravi Bhalla has already worked to reduce taxes by over 15%. He has fought for real, progressive initiatives like Corner Cars, which have cut down on the number of parking passes. He even took a stand and proposed campaign finance reform in Hoboken that would have ended pay-to-play and wheeling, leveling the playing field for candidates with real community support. With all of these accomplishments on his resume, reformers are anxious to see what he can do in Trenton.
“I have so much respect for the Democrats for Honest Government slate this year. Frankly, I am excited to have the support of such active and civic minded members of the community. Never doubt that a small group of thoughtful, committed citizens can change the world,” said Councilman Ravi Bhalla.
For more information on Bhalla for Assembly, please visit www.BhallaForAssembly.com
Posted by SmartyJones at Sunday, May 22, 2011
Ravi: We're going State! Kickoff Tuesday at Hudson Tavern
2011-05-22T16:16:00-04:00
SmartyJones
Comments

Mayor Booker is an urban mayor who is fighting to aid business development in Newark and is making ground.  The mayor showed savy and passion in speaking to this audience.  It was an impressive presentation even if he's given variants of it many times before.

Although he has a big task in Newark, the debate is not will he became a statewide and national political figure but when.  While Gov. Christie is doing it on the state level, should they ever meet mano a mano, it would be a true Clash of the Titans.

This event was sponsored by iEvening at NJIT and the invitation came courtesy of:

Talking Ed Note:  MSV would like to thank Hoboken Technology Meetup for extending this invitation.  They are doing great things in Hoboken and hosts some great speakers and networking events here in town at Stevens.

Da Horsey attended the previous one and was duly impressed.  Thanks again to Hoboken Technology Meetup. Here's a little more on the organization:

The Hoboken Tech Meetup is a monthly meeting of ~100 entrepreneurs and innovators. We meet monthly at the Stevens Institute of Technology campus in Hoboken, NJ to hear from smart feature speakers and interesting startups. The goal is an atmosphere of sharing best practices and learning from both failure and success.

Hoboken Terminal & Yard Redevelopment Plan - First Community Meeting
The City of Hoboken is working to produce the Redevelopment Plan for Hoboken Terminal and Rail Yards property. A two phase redevelopment plan, which will reflect the vision and needs of the community, is underway. Phase I of the Redevelopment Plan will be prepared first, focusing on the 1.8 acre portion along Hudson Place – One Hudson Place. The plan for Phase 2 of the plan will include the remaining portion of the 52 acre Hoboken Terminal and Yards.
This is an invitation to participate in a conversation about Phase 1 and Phase 2 Redevelopment Plan and this important site within the City.
Tuesday, May 31st 2011
Time: 6.00 p.m. to 8.00 p.m.
Location: Rue Building Auditorium, 301 Garden Street, Hoboken, 07030
First community meeting will:
• Review existing site conditions and constraints for One Hudson Place property.
• Discuss issues, opportunities, and your priorities to guide the Redevelopment Plan.
We want to share our ideas and hear yours. Help us in this effort by attending and encouraging your family and friends to do so as well.
Contact Information
City of Hoboken
94 Washington Street, Hoboken, NJ 07030
Email: redevelopmentnjtransit@hobokennj.org
Website: http://www.hobokennj.org/hobokenterminal
Flyer: http://www.hobokennj.org/docs/communitydev/Hoboken-Terminal-Public-Meeting-5-31-11.pdf
Posted by SmartyJones at Sunday, May 22, 2011
May 31 set as next community meeting on Hoboken Terminal & Yard Redevelopment Plan
2011-05-22T11:54:00-04:00
SmartyJones
Comments

The City of Hoboken declared itself a “Mental Health Stigma-Free” zone - the first in the country. The goal is to promote recovery from mental illness by reducing its stigma through community education.

What Is Hoboken Stop Stigma Week?
Our Goal is to promote recovery from mental illness by reducing its stigma through community education

Our Plan:
Events to educate public about plight of people afflicted with mental illness.
Focus groups will be conducted beginning in January through April with church groups etc.

City of Hoboken announces:
Please join us on Monday, May 23rd at 10:30am at Anastasia’s Accessories (88 Garden Street) for a press conference to announce “Shop Hoboken” – a two day event to encourage residents and visitors to support local merchants.

Mayor Dawn Zimmer will join the owners of Anastasia’s as well as other Hoboken retail store owners to announce the city-wide event. See the attached flyer and link for additional information: 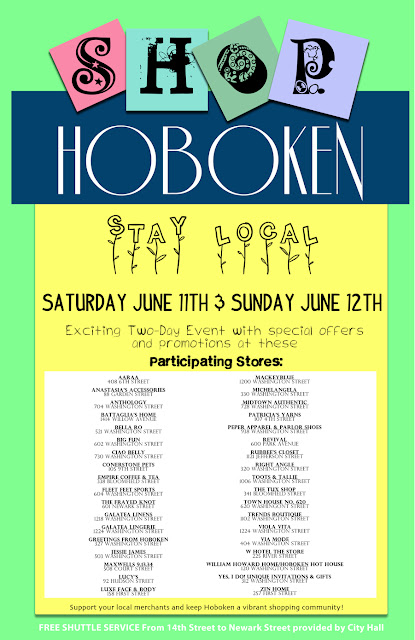 Hoboken Police To Host National Night Out
On Tuesday, August 2nd, 2011, Chief Anthony P. Falco Sr., along with the Hoboken Police Department’s Community Policing Unit and Mayor Dawn Zimmer will be hosting our annual National Night Out. National Night Out is a nationwide event that allows the community workers to give back to their community. The goals of National Night Out are 1) Heighten crime and drug awareness; 2) Generate support for, and participation in, local anti-crime programs; 3) Strengthen neighborhood spirit and police community partnership; 4) Send a message to criminals letting them know that neighborhoods are organized and fighting back.
This year, we would like to see more of the Hoboken community involved in this event. If you wish to participate, please contact Sergeant Melissa Gigante at 201-420-2100. We look forward to working together with you to make our community safer, stronger and more unified than ever before!
Link: http://www.hobokennj.org/news/hoboken-police-to-host-national-night-out/
Posted by SmartyJones at Sunday, May 22, 2011
2011 National Night Out date set for August 2nd
2011-05-22T11:15:00-04:00
SmartyJones
Comments