Tonight the City Council will be holding a special meeting on a budget amendment and maybe on the budget itself at 7:00.  If you have the stomach for the buffoonery of the dying days of the Beth-Russo led council, you can see all the politrickin vapidity if you dare online.

The budget is late.  The incompetence is apparent since Councilman Mike Russo showed up with a handwritten budget earlier this year.  Some have mocked the lunacy of that political parlor trick and said he got it from someone at the Three L's on a napkin but no one can prove it.

It is still true that in the 21st century a Hoboken City Councilman showed up with a temporary budget written in pencil and demanded its consideration at the same council meeting. He said it with a straight face and Councilwoman Beth Mason sat next to him not just following along but backing the charade the whole time.

There's been no work done to cut costs on this budget outside of the efforts of people in the Administration.  That's no surprise and nothing new, but expect tiresome grandstanding and more obtuseness from Councilwoman Beth Mason who made a big stand of trying to stave off approving another temporary budget (again) only to see her support collapse during the vote.

For that bit of sanity in his final days as 6th ward Councilman, a big thank you to Nino Giacchi.

Ravi Bhalla Kickoff for Assembly at the Hudson Tavern 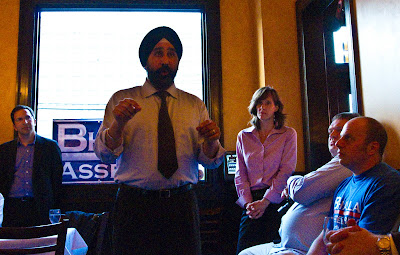 There are two seats open for the Democratic Primary on June 7th and Councilman Ravi Bhalla is working hard with a full campaign team covering the 33rd Assembly District for Weehawken, Union City, part of Jersey City and Hoboken.

While the event was going on here in town, people were working out in the field raising awareness and making the case for better representation.  Councilman Ravi Bhalla who is part of the Hoboken reform majority spoke passionately about identity and maintaining uniqueness while embracing both American values and the American dream.

Mayor Dawn Zimmer attended and spoke in favor of Hoboken coming out to support Councilman Bhalla for an Assembly seat.  Hoboken as his home base is especially important and central to the Assembly campaign and race for Hoboken Democratic Committee that takes place on the same day early next month.

Talking Ed Note: Supporting a win sending Ravi Bhalla to the NJ Assembly does not handicap the current Reform majority on the City Council.  Councilman Bhalla would hold the City Council seat into January and the City Council would vote for a replacement with Mayor Zimmer casting a tie-breaking vote if necessary.  The seat in effect would be selected by Reform.

The Council person designated would then be on the ballot for the November 2012 elections as part of a special election for the seat until the balance of the the term into spring 2013.

In Reform circles, this is being called a win-win.


For more on the Bhalla for Assembly campaign:
http://bhallaforassembly.com/
Posted by SmartyJones at Wednesday, May 25, 2011
Ravi Bhalla Kickoff for Assembly at the Hudson Tavern
2011-05-25T09:00:00-04:00
SmartyJones
Comments