Community Meeting Tonight: Hoboken Terminal & Yard Redevelopment Plan
As a reminder, tonight is the first community meeting as part of the Redevelopment Plan process. The meeting is from 6:00 PM to 8:00 PM at the Rue Building Auditorium at 301 Garden Street in Hoboken. There will be a 30 minute presentation from the City’s planning consultants Wallace Roberts & Todd at the beginning of the meeting, followed by an open house format to allow participants to provide feedback on the issues they are most interested in.

The meeting will include a review of existing site conditions and constraints and a discussion of issues, opportunities, and the community’s priorities to guide the Redevelopment Plan.

Talking Ed Note:  A copy of the Mike Novak email noted earlier to Chamber of Commerce members follows at the jump:

Beth-Russo declare war on the FBI

Never let a good lie stop you from singing wishful songs to your audience and the dying Council majority under Beth Russo is planning to do just that tomorrow.  Grafix Avenger just confirmed the resolution seeking the emails of the mayor's staffers and communications with its secondary targets: The Hoboken Journal, Mile Square View and Grafix Avenger is on the agenda!

Meaning Beth Russo thinks it's more sporting to keep the witch hunt going, even as there's a criminal investigation into the very same information that was leaked to unknown parties going on right now!  Well, you can't slight them for their chutzpah.  After all they have plenty of political operatives who will spread their party line - and not just at Hoboken411.  This past weekend Al Sullivan printed a column that came right from the Mason minion's Ch. 78 anchor desk.  It was a word for word dissembling screed of half-truths, distortions and full out fabrications.


Does Beth Russo think they are going to take control of the storyline now while the FBI is just sitting around doing nothing?  Do they think they have time to make some hay about a half phrase or such and get it up on Hoboken411 and then friends at the Hudson Reporter and the Jersey Journal before the Feds act?

Well apparently they do.  The Russo clan almost always operates in a void of all offense, all the time, right until they close the jail cell behind them.

But you have to ask yourself, do they really want to add motivation to the FBI?  Apparently they do and believe their crowd will enjoy every second of it.

MSV's name is on the resolution so guess we'll just have to go and bring emails along with us.  ;)

Grafix Avenger finds irony in the FBI investigation likely having Beth Mason and her minions as persons of interest and treating the Feds like the downstairs help isn't exactly smart.

Talking Ed Note: If that's not enough to get the juices stirring, MSV has heard a rumor Mike Novak, he of the anti-Zimmer tweets brigade has sent out an email to Chamber of Commerce members asking they attend tonight's NJ Transit meeting at the Rue School on the Jersey rail yard development.

The email suggests the development is key to Hoboken's economic development.  Well there you have it, Tim Occhipinti's position is now defined and perhaps we'll get a rendition from Councilwoman Beth Mason of "Develop or Die" again.

The battle lines are once again drawn.

Old Guard commenter on FBI investigation: 'It's hitting the Council'

Chestunut fillies are our favorite and the saying be what you would like to be with holds true in horsey land.  Da Horsey however has been green with envy over that warbling fleshy Deep Uvula at Grafix Avenger for some time now.

We've tried to cultivate insight from our pals in the Old Guard lately on the FBI's latest foray into town but none will talk and others who would be happy to return a phone call are less than available at least partly due to the holiday weekend.  Perhaps they are scrambling to line up the best criminal lawyers their respective funds can retain.

One extremely reluctant Old Guard denizen did make second remarks of interest.  Oddly, they're none too fond of the Old Guard; it's merely business.  As we stated in an earlier story even with those sentiments, they let fly with a torrent of thinking but so reluctantly it was couched with, "We're on lock down.  Nobody can say anything at all." 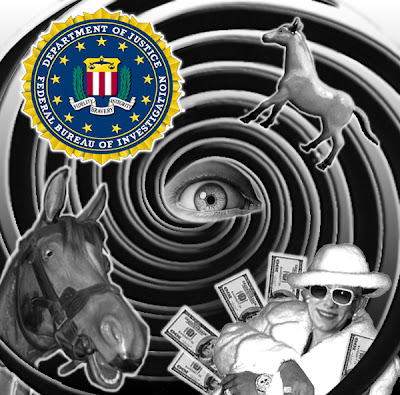 Our latest update comes courtesy of the same source who made the last insightful but reluctant comments and never wants to see it come back to them.  It was heartwarming to those on the right side of the law in Hoboken political circles:

"A lot of people are going down...

I'm telling you, a lot of people are going down."

The latest was even better or worse depending on which team you're on.  Still reluctant, still twitchy and nervous but the Old Guard source flat out stated who he believes looks to be in trouble with the FBI:


Now if you are a ghostwriting minion for Beth Mason, it's time to pick up the phone or text Hudson Street and ask if you can move the narrative forward.  Then you can write about how the FBI is investigating Councilman Dave Mello's expired car registration sticker and the lifetime sentence he's facing in Rahway when the full truth comes out and the rest of the Reform council members begin flipping on each other about someone's unpaid traffic ticket.

Or we can explore further what this may mean here safe from the Twilight Zone. So let's do that.

While this source can't be vetted and panic may in fact be part of what's being voiced here; it's still in line with what Deep Uvual had stated previously prior to the FBI sweep at week's end and knocking on doors around town on Friday.  So that's credible enough for consideration.

Does it figure to prove out?  Not sure, but the point is if it's barely leaking out on the street then it must be a real concern among the Old Guard.  What little there is doesn't smell good.  It smells like unadulterated fear.

As we await law enforcement doing the hard work grinding the truth out of electronic records and those who need to avoid facing prison bars for a long stretch, Hoboken will be waiting for the next shoe to drop.  In the end, only the Feds know and at this point they may not have gotten further along enough to map out their actions.  Their forensics people are no doubt very busy cataloguing their lengthy and growing findings.

At least one glass slipper may crack at the Wednesday City Council meeting.  The Beth Russo resolution targeting the mayor's staff emails along with The Hoboken Journal, Mile Square View and Grafix Avenger is slated to be back.

Think the FBI will be watching?

Talking Ed Note: Councilman Mike Russo was phoned for this article but did not call back before posting.  One of the questions MSV had is what the status of the email resolution Wednesday will be.  If he gets back, we'll update this story for everyone.

For those people who have already signed up as subscribers, thanks kindly for your support! To so many others, what are you waiting for?  It's going to be da bomb.

Ready for the deep dish? Time to pony up, well just a little

It's been another record week here, and coming close to more time spent than ever imagined trying to provide an open forum with timely power packed articles, and focused analysis on the important themes of accountability and corruption in the mile square.

So at this point, The Hudson Mile Square View is looking to take the next leap with articles hitting harder with more punch than ever with a new subscriber feature.  We're introducing a monthly and annual subscription for some content at $6 a month or $55 a year.  (MSV prefers the annual choice for obvious reasons.)

MSV will continue to deliver the most in-depth, straight-forward and honest truth on the goings on inside and outside City Hall in Hoboken and beyond.  We'll be keeping an eye to expanding into Hudson County, thus the new name The Hudson Mile Square View.

Considering the untidy nature of government in these parts, it should keep us busy for a long while.

We'll look to execute the special articles feature shortly and you can sign up below.
The email address you use will be the one where the special feature will arrive so be sure to pick an active one you are currently using.

MSV looks to continue serving our community with the frankness and full heads on style Hoboken has come to appreciate.  Spread the word, this is the next step and we're excited to make it.

The site will continue other than the special emailed subscriber articles (which will be packing a wallop).

Looking forward to your support, continued reading, participation and working toward making Hoboken the best it can be for all.  Payments via paypal are secure and your debit or credit card payments are done strictly through them as a subscription feature of their service.  If you don't have an account, it's simple and quick to set up at http://www.paypal.com.

Again, you can subscribe monthly or annually as it's automated and obviously an annual contribution works best all around.

Annual payments can be sent via regular mail.
Please include your email address when snail mailing to:

Checks can be made out to RW Brice.  Inquires via email to: smartyjones@me.com