Running with no slate and against two County Machines, Ravi Bhalla has made a strong first run for statewide office.

The strong showing may also save control of the local Hoboken Democratic Committee. Running off the line as well against the HCDO and the Beth Russo checkbook, the Hoboken committee races in town are close with the reorganization meeting likely to determine the outcome.

Councilman Ravi Bhalla has vowed to work to make sure Democrats for Honest Government hold the local Democratic Committee.

In a stunning result, 2nd ward resident Donna Antonucci running without a district counterpart has crushed Beth Mason diehard Ines Garcia Keim, the sitting chair of the Real Democrats led by the Michele/Mike Russo and Beth Mason cabal. The final vote was more than a 2-1 difference in favor of Antonucci.

Vijay Chaudhuri in the first ward, 1-7 has won his district in the same ward as Councilwoman Castellano. He was targeted by the Russo clan yet produced a victory just the same in his first time run.

Talking Ed Note:  12:30 AM - The Democratic Committee unofficially stands at 38-34 with the Michele Russo led HCDO ticket a nose ahead.  The final certification with the reorganization meeting will determine the numbers in this close election.

Honest Democrats for Hoboken have done an amazing job with Councilman Ravi Bhalla and Mayor Dawn Zimmer fighting off the line and staving off a monumental challenge.  The HCDO had ditched the real Democrats with a Michele Russo led ticket pushing the incumbents into a new slate.  The results will be final after the reorganization meeting.

Without Councilman Ravi Bhalla's late Assembly challenge with a less than four week election race, the local Democratic Committee would not be in the face off it now sits.

Reform can be proud.  There will be no more nonsense complaints about ties to the HCDO.  The HCDO backed Republicans on the Democratic ticket for Michele Russo and Beth Mason.  Yet an independent slate led by Ravi Bhalla and Mayor Zimmer is right in the race.

How do you like them apples?
Posted by SmartyJones at Tuesday, June 07, 2011
Sean Connors and Assemblyman Ruben Ramos win primary, off the line Honest Democrats in tight race
2011-06-07T21:03:00-04:00
SmartyJones
Comments

None dare call it electioneering...

One of the rules for a fair election is that no signs, buttons or candidate literature can appear anywhere within 100 feet of a polling station.  But what about non-candidate self-promotion. 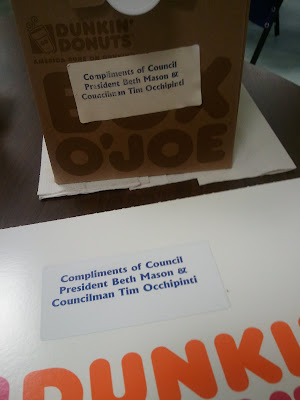 Today's the day, yes Election Day! Up the Republic!

The face of Hoboken's Democratic Party?

Today is the primary election for two Assembly seats and the local party committees.  Hoboken's Reform movement last year overturned the control of the Democratic Party Committee and has a real fight on its hands now.

Michele "five dollars a tow" Russo is working hard to get people out to vote so she can get her hands back on the local machinery.  Historically the Hoboken Democratic Party has been a vehicle for wheeling hundreds of thousands of dollars into the hands of La Familia, greasing the wheels for elections and polluting the whole body politic in town.


Win or lose, it's critical to elect every decent Democratic Committee person.  Although the bylaws have been updated to rid the practice, you want to make sure the Old Guard doesn't get their hands on the wheel.

They are not exactly bashful about using it for personal enrichment.  Michele Russo was a commissioner of the Hoboken Parking Utility.  The FBI did not pursue her in what looks like was a plea deal with ex-mayor Anthony Russo.  But surveillance tapes report she received a kickback for every tow in town.  It was $5 a tow in testimony from the owner of Pino's towing.

Today Hoboken has an election to see if it doesn't get towed back.

If that's not enough to consider making a visit to the polls, Councilwoman Beth Mason is email blasting with her usual coterie of fabrications.  Here's her latest assault on Mayor Zimmer:


Time to hit the polls.  Yes, again.  Take out your neighbors too.  In these small elections, every vote is critical.