Update:  The NJ State Assembly after hours of meetings and debate easily passed the legislation for reforming contributions by state workers in healthcare and pensions.

The actions means a change where the state's fiscal life became important enough to address the cost of government employees.  It also makes New Jersey a model for the rest of the country as other states face similar problems.  Unlike others, NJ elected officials didn't abandon their responsibility and run away from the financial problem when it didn't suit a narrow special interest.

Gov. Christie is expected to sign the legislation Monday.  The provision in some of the numerous health care options for limiting out of state coverage was nixed before the final vote on the legislation and the State Senate will do likewise.

33rd District Assemblyman Ruben Ramos who would not vote in favor of the bill with the out of state provision voted no after its removal.

If projected retirements prove accurate Hoboken will see a double edged sword and quickly.  The City incurs added cost with retirements initially before recouping savings.  This legislation highlighted the possibility noted to the Beth Russo council here and by others in City Council meetings and all ignored in their effort at depleting the surplus in a one shot tax reduction.


Once again, Hoboken finds itself not standing to benefit from this positive state action but hindered by it due to the crass cynicism of its City Council.  The reason is the Beth Russo 'majority' - a lame duck group acting on selfish political interests, has set Hoboken up for failure.  They know it, you know it and the people of Hoboken know it.

Beth Mason is arranging a budget amendment meeting on the 29th to finalize the damage to Hoboken where a one shot tax relief leaves Hoboken unequipped to handle more retirement costs.  It's only one of the problems the city may face being stripped entirely of its budget surplus.

The likely near term result of that madness: some tax increase AND layoffs.

Hoboken needs to rise up and slay the Beth Russo hydra once and for all before they can do any more damage.

There's been a day long union organized protest in Trenton with the State Assembly hours late in preparing to vote on Gov. Christie's package of reforms impacting the state's fiscal situation for the better but creating additional cost for state employees in healthcare benefits and pensions.


The bill already passed earlier in the Senate by a large margin is expected to be tighter in the Assembly but more than a dozen Democrats are expected to vote for passage making the landmark legislation a bipartisan effort.

Assemblyman Ruben Ramos is anticipated not to be among those voting in favor of the bipartisan effort.  He was reportedly breaking with his local support in the form of Union City Mayor and State Senator Brian Stack who urged him to vote for the legislation.  Assemblyman Ramos earlier complained about a out-of-state block for some lower health care coverage options, a mandate changed early this week.

A vote is anticipated for later this evening at 10 pm.

It's not official but resident public space is being booked in the Fox Hills senior building for a celebration.  The celebration is Beth Mason's throwing herself a party for her 2nd ward re-election in the 5th ward!  She's calling it an inaugural party. 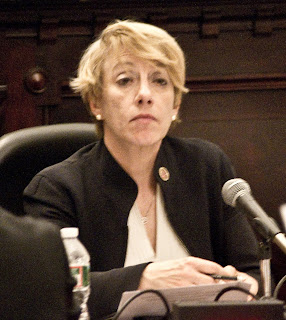 The practice of booking space for a political purpose, in this case an obvious kickoff for the 2013 mayoral race certainly falls outside the lines for the government building but there may be a loophole.  A certain brotherly tag team from the 4th ward involved in local election dirty tricks has their grandmother in the building and are using her as the means for the Beth Mason entry.

Beth Mason can't wait to drop another record setting seven figures she blew in 2009 seeking the mayor's office and is sure to dig deep into the family wallet again.  It's begun.

But two full years before election season?  Yes, it's Beth Mason and she wants to get the senior votes for 2013.  She's willing to throw herself a 2nd ward party in the 5th ward, no matter how transparently bad such a move looks.

Talking Ed Note: The sheer vapidity of celebrating your re-election in another ward would seem insane to some, but this is Beth Mason we're talking about and logic has nothing to do with it.

On a separate note, MSV received an email from a reader that Hoboken411 is reveling in joy today.  For once it's not a complete lie in its second hand typical no source reporting that some parents booed the mayor at the Hoboken High school graduation over some seconds, but not the minute the fanatically deranged anti-Zimmer smear king says.

If they are blaming the mayor for the drama queen theater director and "teacher" Paula O'haus, they need to learn the rules are governed by the state not City Hall.  Another view is that the parents who are municipal employees are down on the mayor for her efforts at cost control.

Besides, there's word on the street Paula O'haus has taken a job in Englewood Cliffs ending all her politically staged drama from the spring.  She's made it abundantly clear, she has no intention of following any rules under any superintendent past or present.  She's been very vocal and arrogant about it.

Update: The booing at the High School is said to have lasted several seconds initiated from the back of the auditorium by adults, not the students.  Some of those adults are anti-Zimmer elements not over their political defeat re: Real Results and Beth Mason's hard core old guard supporters on Democratic Committee.

Not much you can do with people who take election defeat so badly they politicize an apolitical event like children's graduation.  Unfortunate.

Hoboken Patch thought so little of it, there was nothing mentioned about the less than classy behavior.
Posted by SmartyJones at Thursday, June 23, 2011
Beth Mason begins mayoral run with 2nd ward election celebration - in the 5th ward Fox Hills senior building
2011-06-23T10:14:00-04:00
SmartyJones
Comments