Temperatures are up along with the humidity but one doesn't have to fret even if bored while waiting for the FBI to return with a knock on the door.  For those who are suffering from the lack of budget drama in the last week, here's an update. 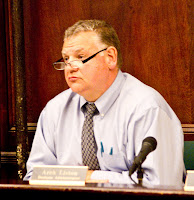 During a lull in the City Council meeting Friday, Business Administrator Arch Liston who has mastered the art of Hoboken politics by quietly allowing the other side to demonstrate their incompetence answered a question on how the budget amendment is likely to be reoriented later this month.

Based on some final figures being tabulated, the Hoboken BA believes a budget surplus will likely fall in the range of $4 million.  While that is somewhat short of the Administration's original five percent target, it should provide a cushion for the laundry list of needs in the short term.

One near term item is the local firefighter unions who are seeking a contract with millions in retroactive pay over several years.

The budget surplus tally should be calculated shortly and an amendment will be ready for the next City Council meeting.

Council members Beth Mason and Mike Russo wanted to strip the city of any surplus leaving the city's coffers completely empty.  That effort went on into the last hours before the arrival of 6th ward Councilwoman Jen Giattino.

There was no consensus budget effort with the mayor at all who wanted to follow professional municipal budgeting guidelines retaining a 5-10% budget surplus.  No explanation was ever given how a zero surplus met any professional standard.  Mason and Russo said they were approving one shot tax relief for the taxpayers, but many did not buy that stated reason.

Neither offered any budget cuts while they retained control of the council, while oppossing the efforts by Mayor Zimmer who reduced spending in the millions year over year.

Talking Ed Note: MSV advocates tax reduction and has not moved from that position.  But what is not supported is political budget sabotage in one shot tax relief.  What Hoboken needs and deserves is sustainable tax relief.  The only way to get it is through hard work and making the tough decisions and lasting reductions.

The Council of No showed no desire for either.

Friday's council meeting saw a packed agenda and a long list of pent up items from an ordinance on Corner Cars to consideration for November elections and anti-wheeling legislation.  In the mix was a resolution passed to end the Beth Mason witch-hunt for emails.

That original resolution sponsored by Council members Beth Mason and Mike Russo never offered any factual basis for initiation.  It ended with the resolution passed Friday but not before some additional, unexpected outcomes.

In an interview after Friday's City Council meeting, Councilwoman Beth Mason addressed several questions in an impromptu interview among them: the missing attachments to her ELEC report on $52,000 in street money, a letter discussed in an earlier meeting from the FBI requested by Councilwoman Carol Marsh and then the $64,000 question about the emails.

The question as yet unanswered by both parties, directed by MSV at both Councilman Mike Russo and Councilwoman Beth Mason Friday going back to early May is "Have you seen any of the emails you are requesting in the resolution you sponsored?"

After the council meeting, this question, the last of three was again posed to Councilwoman Beth Mason.  "What about the emails?"

Beth Mason paused, put on her sunglasses standing just out front of City Hall and replied, "I didn't see yours."  She repeated that answer one more time and then without saying another word, turned and began walking up Washington Street.

For the record, MSV has never asked about its emails.  The question has always been comprehensive concerning all the emails between the Administration, local media and the parties stated on her original resolution.


Talking Ed Note: Probably no story generated as much discussion considering it didn't actually appear on MSV, well less than 10% did, than yesterday's.  It was remarkable to see such a thorough discussion on the matter taking place when fully 90% of the story was only available to subscribers.

For the record, the story contained detailed multiple sources, was cleared with MSV legal and in no way places anyone or the FBI investigation in jeopardy.  All of this was given due consideration and is noted in the story itself.

Considering how much time and effort went into this, including a portion of the holiday weekend, it was fascinating to see so much comment on a story not even visible.  While this site has very narrow limits on restricting speech and intends to remain that way, MSV would prefer comments limited to what appears on this one.  Just a cursory review several pages back shows varied coverage on a number of issues in Hoboken and the FBI criminal investigation not featured among them.

We'll note the feedback received on the story from subscribers was very positive.
Of course the story is available to anyone who wishes to make a determination for themselves.

Those who wish to offer information on a confidential basis are welcome to do so at smartyjones@me.com.  Measures to protect confidentiality continue and are done with the utmost respect and assurance of privacy.