HMHA thanks Mr. Hatiras and wishes him well in his future endeavors.  He will be pursuing other professional opportunities after he spends time with his father who is in failing health.

Mr. Vincent Riccitelli, currently the acting Chief Financial Officer at HUMC, has agreed to serve as acting CEO.  He will remain in this capacity until the sale of HUMC is complete.  At that time, it is anticipated that a new CEO will be named by HUMC Holdco.

“During this transitional period, Mr. Riccitelli will work closely with Hoboken Mayor Dawn Zimmer, HMHA and me to help employees and residents understand the importance of completing the sale to HUMC Holdco, under common ownership of the principals of Bayonne Medical Center,”  says Toni Tomarazzo, HMHA chairperson.  “We will continue to engage these key constituents to ensure they understand that this change of ownership is the only way to save the hospital.”

“We are close to completing the sale of our hospital to HUMC Holdco,” adds Riccitelli.   “This agreement will lead to long-term benefits for our staff and our community.  Our new owner has access to capital to attract and retain quality health care providers, finance improvements, initiate new program development, acquire advanced technology, and maintain the hospital as the life saving acute care unit that we and the citizens of Hoboken deserve.  The Mayor and HMHA have worked tirelessly to save our hospital and I’m honored to be part of the team that will help complete the transaction.”
Posted by SmartyJones at Friday, July 15, 2011
Hospital announces CEO resignation, CFO to take interim role
2011-07-15T12:32:00-04:00
SmartyJones
Comments

The Russo Civic Association is homeless 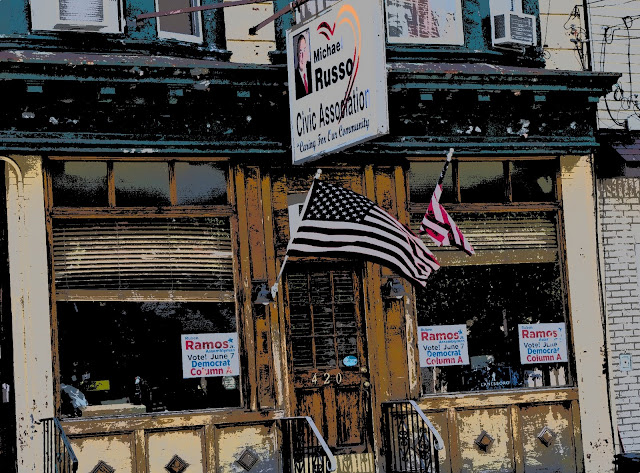 The Russo Civic Association a bastion of power for the Russo family going back decades under former mayor Anthony Russo is without a home.

Based on an interview after the City Council meeting with Councilman Mike Russo, the status of the organization's domicile is up in the air.  Asked about word stating the Association was moving, Russo didn't offer a clear answer as to where.

He later indicated the lease to the Russo Civic Association was up but no future space has been identified to this point.

Earlier, MSV heard word the Association would be moving to another location in the neighborhood.  There was however no confirmation and no destination stated.  As of a few days back, a firsthand review showed the space filled with furniture and other items as before sans the identifying sign markers.

This clears up the matter on what occurred with the sudden shut down.  Or does it?