The following communication appears on the NHSA website.  MSV is posting it in its entirety without editorial comment.


From August 8th to 15th, the Authority’s service area was hit very hard by torrential rain storms, resulting in severe flooding in certain sections of Hoboken and, to a lesser extent, in “The Shades” area of Weehawken. In Hoboken, the intersections around Harrison and First Street, Jackson and 4th Street, and Madison and 9th Street experienced the worst of the street flooding, especially on August 14th when an incredible 5.81 inches of rain fell in a 19 hour period, beginning at 1:50 AM.
Street flooding occurs in Hoboken, much of which is below sea level, when there are unusually heavy rains that fall when the Hudson River is at high tide. The rain water flows into the sewer system through outfalls into the River, but at high tide the water cannot empty into the Hudson. Consequently, the rain water backs up the sewer system until the system is completely filled with water, forcing it out into the lowest lying streets.


On August 14th, in the midst of the heavy rains, the tides were high not once, but twice: at 9:39 AM and again at 9:50 PM. Exacerbating the situation was the fact that the tides were extremely high, running at 5.1 feet, almost two feet higher than average Hudson River high tides. 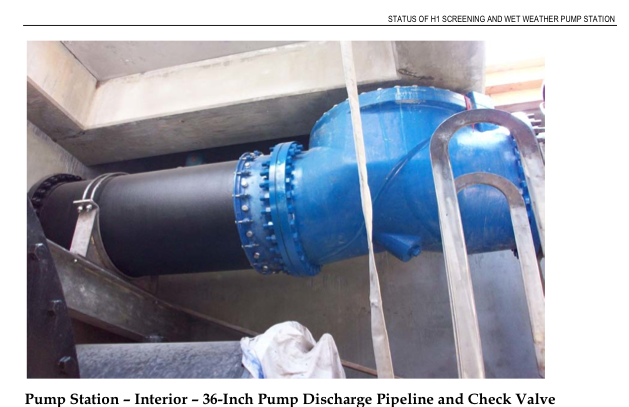 The Authority is in the midst of a major initiative to alleviate the worst of the flooding in Hoboken, flooding that has been a problem for over 100 years. The strategy includes the following:


 The thorough overhaul and relining of almost the entire Hoboken collection system. This first step was initiated several years ago and is substantially complete as of today. The last of the Civil War era wooden sewers is currently being replaced, with the work expected to be completed in the Spring of 2012.


o The total amount invested by the Authority in the rehabilitation of the Hoboken system has, to date, been approximately $40 million.


 The construction of an $18 million wet weather pump station that is scheduled to be on line by the 4th Quarter of 2011. The pump station will be capable of forcing 100 million gallons of water per day into the Hudson River during rain events.


o To accelerate this project, the Authority authorized in July the doubling of the manpowerneededtocleantheoutfalltotheHudsonRiver. Thisdifficult cleaning cannot be done by machines, but requires hand cleaning due to the conditions of the pipelines.

 The analysis of the impact of the pump station on other areas in Hoboken. Once the pump station is on line, the low lying areas in the southwest sections of Hoboken should see major alleviation of flooding. Because the collection system in Hoboken is interconnected, the Authority’s engineers believe that other areas of Hoboken should also see mitigation of flooding.


o By the 1st Quarter of 2012, the Authority will begin to examine the extent to which storm water from other areas of Hoboken can be conveyed to the new pump station. If necessary, the Authority will take subsequent remedial construction and engineering steps to accomplish this.


The Authority, which services the populations of four communities, has made major investments in Hoboken’s long neglected wastewater infrastructure. It recognizes the severity of the flooding in the City. Its engineers have carefully studied the problem, and the Authority has initiated a comprehensive approach to solve the problem. We are acutely aware of the tremendous difficulties and inconveniences of the current flooding, and we are moving as rapidly as possible to implement our program.
Posted by SmartyJones at Tuesday, August 16, 2011
NHSA addresses recent Hoboken flooding
2011-08-16T14:54:00-04:00
SmartyJones
Comments

A successful petition would place the matter of November elections on the ballot for a vote this fall.

The effort which began almost as soon as the proposed move passed in a 5-4 vote at the last City Council meeting means the expected higher turnout in a November election would likely be thwarted.

Councilman Mike Russo was reported to have said not ten minutes after the City Council approval a referendum effort was already underway led by developer and perennial candidate Frank "Pupie" Raia.

The Hudson Reporter noted last weekend November elections in Hoboken typically produce a 45% higher vote count. Most objective observers understand the referendum is designed to maintain lower voter participation citywide when voters in subsidized housing can play a larger role in election outcomes at the expense of the "newcomer" taxpayers.

The referendum's chances of passage in a low turnout election are higher with no compelling election items to bring voters to the polls later this fall.  Two Hobokenites, Freeholder Anthony Romano who is up for re-election against The Hoboken Journal's Kurt Gardiner is a recent surprise addition, but it's unclear if awareness will generate more voter enthusiasm and participation.

Oddly, its a fall November election the Frank Raia Old Guard forces are counting on with low turnout. With over 3700 signatures, its not likely a review at the City Clerk's office will toss out sufficient votes to force the backers of the referendum to take additional time to obtain the required 2200 signatures.

MSV exclusively reported receiving multiple reports of people being approached by young workers, many hired from Bayonne, to sign a petition against the Port Authority toll/PATH increases. On reading the document, they found the petition was for overriding municipal elections in November and maintaining them in May.

Talking Ed Note: One argument stated in favor of May elections is to keep a clear line away from partisan politics. But the recent county elections in May show a partisan tilt to the County's influence as the slate backed by the combined HCDO and State Senator Brian Stack barely received token opposition in the spring primaries.

MSV predicted the referendum effort would obtain the required signatures for the ballot this November if for no other reason than more people would be hired to find people to sign when needed.

Backers of the referendum have highlighted almost exclusively the extension of six months to the Council and mayor's terms as the reason to seek a direct public vote.

Observers of the Old Guard in Hoboken know better. This may still play out in more ways than anticipated.