Mayor Zimmer has called for a special meeting of the City Council on several hospital related issues tomorrow @ 7:00. 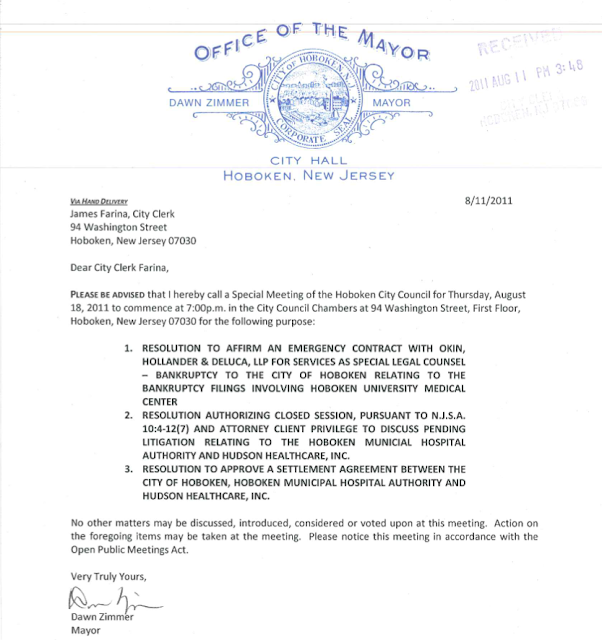 There's several items here and the second is regarding litigation in closed session.  As the hospital's management arm declared bankruptcy, Hoboken will be in line for almost $2 million in outstanding obligations, about half to the Parking Authority.

The City is looking to set up a legal contract to engage that issue.  There's also a settlement portion here but it's unclear as to the details.

What professional work needs to be completed will likely pass as the Beth Russo group does not have the votes to obstruct.  Councilwoman Beth Mason has been working behind the scenes with Appleseed and the unions to subvert the deal but in the end, the process is just one step from completion needing a signature from the State.

Although Bayonne's Holdco has agreed to retain 75% of the jobs, some have tried to create a climate of fear saying it will be exactly 75%.  On background someone who has a sense of the proceedings believes it will be far higher than the minimum of 75%, although nothing can be confirmed until it's all said and done.

The sabotage to the needed sale of the hospital is all but finished.  Now Hoboken needs to see the completion of the sale to both save the hospital and spare the taxpayers the risk over $50 million.

Pearson Education a NJ based company in upper Saddle River is rumored to be looking for a new home in the Garden State.  As part of a state tax incentive, this one comes in at a whopping $90 million, Pearson would need to select a new home near one of nine transportation hubs.

According to a story on North Jersey.com, the word on the street is it's Hoboken.

It's estimated the Bergen County based company employes 1,100 people.  The potential destination for many of those jobs and the local spending that would come with it is River St.


Talking Ed Note: This is one sizable score, almost as impressive as the company New Jersey Transit was touting for their cornerstone building along the water at the train station.   New Jersey Transit did not publicly name Pearson but how much do you want to bet it was?

On another jobs front, there was a BoE meeting last night.  The War of the Roses between Kids First and the Old Guard led by Frank Raia is in high gear.  Along with Raia was Michele Russo, 5th ward council candidate from last spring Perry Belfiore, Freeholder Anthony "Stick" Romano, Teresa Burns, 4th ward politicos Nick and Matt Calicchio.

It's not election season but it never ended at the BoE since theirs last April.

Kids First has reduced spending and cut administration positions while expanding instructional programs for 900K.  Another million is being saved for preserving the existing tax levy so there is no tax increase on Hoboken taxpayers.